Baker is a census-designated place located in San Bernardino County, California, US. As of the 2010 census, the CDP had a total population of 735. Baker's ZIP Code is 92309 and the community is within area codes 442 and 760.

Baker was founded as a station on the Tonopah and Tidewater Railroad in 1908, and was named after Richard C. Baker, business partner of Francis Marion Smith in building the railroad. Baker later became president of the T&T himself.

Baker was established in 1929 by Ralph Jacobus Fairbanks (1857–1942), who was an American prospector, entrepreneur and pioneer who established several towns in the Death Valley area of California, including Fairbanks Springs (1904–05) and Shoshone (1910).

It is the site of a vacant for-profit prison formerly operated by Cornell Corrections which experienced a major riot on December 2, 2003, four weeks before it was temporarily closed. It was permanently closed on December 25, 2009. GEO Group purchased Cornell Companies, its owner, on August 12, 2010. It had previously experienced escapes in August and November 1995, and two on July 15, 1997.

According to the 2010 United States Census, Baker had a median household income of $33,068, with 9.9% of the population living below the federal poverty line.

Appearances in films and television

In 1991 the town was the setting for a skit on Fox's comedy show Totally Hidden Video.

It is referenced in the film Fear and Loathing in Las Vegas as a stop for Raoul Duke on his way back from Las Vegas going to Los Angeles.

The surrounding desert areas in Disney's Dinosaur were shot here.

It is a major setting of the 2003 science-fiction film The Big Empty.

An episode of the Food Network show Diners, Drive-Ins and Dives featured the Mad Greek's Diner in Baker.

Baker and the surrounding area were featured in two episodes of Gene Simmons Family Jewels when Gene Simmons broke down outside of Baker on Route 127. Episodes 5 and 6 of season 3 ran in March 2008 and featured the town.

Baker is referred to three times in the 1958 SciFi movie, Attack of the 50 Foot Woman; the title character's doctor is off in Baker, the local police contact the authorities in Baker, and they wait for the state troopers to come down from Baker.

The Mars Science Laboratory Team tested an engineering model of the Curiosity Rover in the desert near Baker. 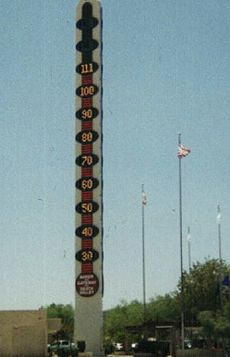 Amtrak's Thruway Motorcoach had a stop located at a Jack in the Box restaurant and Shell gas station at 72352 Baker Blvd., and its Amtrak station code was BKR, but the stop was discontinued in November 2010. Low ridership and cost savings were cited as the reason for discontinuing the stop, but the Amtrak bus can still be seen driving down the freeway from the bus stop, even though it no longer stops.

Baker's economy is based primarily on tourism. The town is frequently used as a stop for food and fuel by drivers on Interstate 15 between Los Angeles and Las Vegas. Baker is approximately 90 miles (144.8 km) southwest of Las Vegas. It is the last town for those traveling on SR 127 north to Death Valley National Park or south to the Mojave National Preserve. Currently there is only one motel in Baker, the Santa Fe Motel, formerly the Wills Fargo Motel.

Baker Airport is a small facility owned by the U.S. Department of the Interior, Bureau of Land Management. 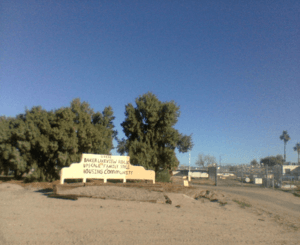 All content from Kiddle encyclopedia articles (including the article images and facts) can be freely used under Attribution-ShareAlike license, unless stated otherwise. Cite this article:
Baker, California Facts for Kids. Kiddle Encyclopedia.