Zzyzx (/ˈzaɪzᵻks/ ZY-zəks), formerly Camp Soda and Soda Springs, is an unincorporated community in San Bernardino County, California, United States, within the boundaries of Mojave National Preserve. It is the former site of the Zzyzx Mineral Springs and Health Spa and now the site of the Desert Studies Center. The site is also the location of Lake Tuendae, originally part of the spa, and now a refuge habitat of the endangered Mohave tui chub.

Zzyzx Road is a 4.5-mile-long (7.2 km), part paved and part dirt, rural collector road in the Mojave Desert. It runs from Interstate 15 generally south to the Zzyzx settlement.

Soda Springs, a natural spring, has long seen human activity. The area was a prehistoric quarry site, and projectile points and rock art can be found in the area. The Mojave Road ran past the spring which was guarded by the Hancock Redoubt in 1860, during the Bitter Spring Expedition and by Camp Soda Springs, garrisoned by the U. S. Army from 1867 to 1870. Later Soda Springs was the name of the station of the Tonopah and Tidewater Railroad that passed there. Remnants of a wagon road stop and railroad artifacts are readily seen. Evaporative salt mining and mill sites can be found here as well. 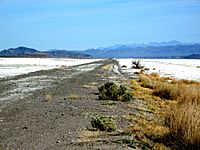 Curtis Howe Springer gave the made-up name Zzyzx to the area in 1944, claiming it to be the last word in the English language. He established the Zzyzx Mineral Springs and Health Spa in 1944 at the spot, which was federal land, after filing mining claims for 12,000 acres (49 km2) surrounding the springs. He used the springs to bottle his water and provide drinks for travelers through the hot desert. Springer also imported animals from around the country to attract more families to visit his ranch. He used Zzyzx until 1974, when the land was reclaimed by the government.

Since 1976, the Bureau of Land Management has allowed California State University to manage the land in and around Zzyzx. A consortium of CSU campuses use it as their Desert Studies Center.

The name appeared as "Zzyzx Springs" in Dmitri Borgmann's 1967 book Beyond Language. In 1977 Borgman noted his source as being "an old, undated map of San Bernardino County published by the Automobile Club of Southern California" and repeated his description of the settlement as being "a hydrologic feature and privately owned spa in San Bernardino County, California, about 8.5 miles south of Baker, on the western edge of Soda Dry Lake, off the abandoned right-of-way of the old Tonopah and Tidewater Railroad." After Borgmann's book, the 1973 Hammond Ambassador World Atlas began to show the place, labeling it as "Zzyzx" without the "Springs"; the 1976 Rand-McNally Commercial Atlas and Marketing Guide followed suit.

Zzyzx as a settlement, and Zzyzx Spring as a water feature, were approved as a place name by the United States Board on Geographic Names on June 14, 1984. As is the case with the road, Zzyzx, California, is the USBGN's lexicographically greatest (alphabetically last, at least in Latin alphabetical order) place name. It has frequently been noted on lists of unusual place names. 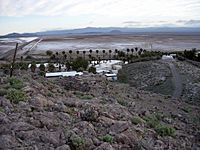 All content from Kiddle encyclopedia articles (including the article images and facts) can be freely used under Attribution-ShareAlike license, unless stated otherwise. Cite this article:
Zzyzx, California Facts for Kids. Kiddle Encyclopedia.