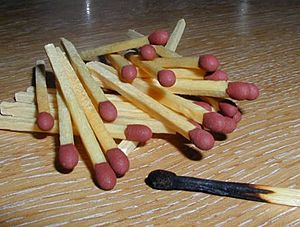 Matches made from wood 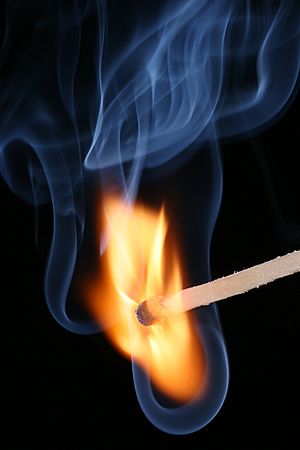 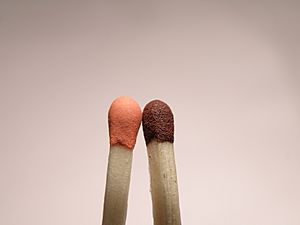 A match is a tool for making fire under controlled circumstances. Most often, it is a small piece of wood, or hardened paper. At one end, the match is coated with a material that will ignite from friction. The lighting end of a match is known as the match "head". It either contains phosphorus or phosphorus sesquisulfide as the active ingredient and gelatin as a binder. Matches are sold in multiples, packaged together either in a box, or in matchbooks. There are two main types of matches: safety matches, which can be struck only against a specially prepared surface; and strike-anywhere matches, for which any suitably frictional surface can be used.

There are also electric matches, which use electricity and not friction to produce a fire.

Matches that used sulfur were mentioned by Martial in ancient Rome. He called them sulphurata.

Around the year 1530, Matches appeared in Europe. The first modern, self-igniting match was invented in 1805 by K. Chancel, assistant to Professor Louis Jacques Thénard of Paris, though. The head of the match was made of a mixture of potassium chlorate, sulfur, sugar, and rubber. They were ignited by dipping the tip of the match in a small asbestos bottle filled with sulfuric acid. This kind of match was quite expensive and its usage was dangerous, so Chancel's matches never gained much popularity.

Storm matches, also known as lifeboat matches or flare matches, have an easy to strike tip like a normal match, but much of the stick is coated with a combustible compound which will keep burning even in a strong wind. They have a wax coating to make them waterproof. They are a component of many survival kits. This particular match was used in the first mass-produced Molotov cocktails.

"Bengal matches" are actually small hand-held fireworks akin to sparklers. They are similar to storm matches in form, but they include compounds of strontium or barium in the compound on the stick to produce a red or green flame respectively.

All content from Kiddle encyclopedia articles (including the article images and facts) can be freely used under Attribution-ShareAlike license, unless stated otherwise. Cite this article:
Match Facts for Kids. Kiddle Encyclopedia.