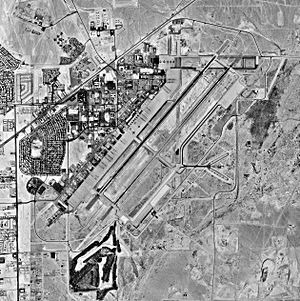 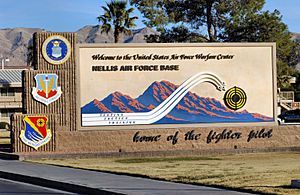 Nellis Air Force Base (Nellis AFB) is a United States Air Force military base. It is located in the north part of Las Vegas, Nevada. It is home to the Thunderbirds. The base also trains fighter aircraft for the US Air Force. The base is named for William Harrell Nellis, a Las Vegas resident and P-47 pilot who died in action during the Battle of the Bulge in World War II. Nellis AFB is home to the F-15, F-16, and the F-22 Raptors.

The main base covers close to 11,300 acres (46 km²). Much of the base is undeveloped. The rest of the area is either paved or has buildings. The Indian Springs Air Force Auxiliary Airstrip was a part of Nellis. It used to be known as "Area 3". On June 20, 2005 the field was renamed to Creech Air Force Base.

The base has three main areas.

All content from Kiddle encyclopedia articles (including the article images and facts) can be freely used under Attribution-ShareAlike license, unless stated otherwise. Cite this article:
Nellis Air Force Base Facts for Kids. Kiddle Encyclopedia.