Geographically, Southern Nevada is partly, and in some cases, fully within the Mojave Desert. The population of the region, as measured by the 2000 U.S. Census, is 1,432,004, though the Las Vegas Valley has now increased to over 2,000,000 itself. 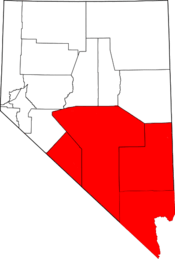 Aerial view of Pahrump, Nevada with Spring Mountains in the background

The Mojave Desert and Great Basin Desert cover all or most of Southern Nevada. Man made lakes, seasonal, and dry lakes periodically dot the landscape. Examples of these are Lake Mead, Lake Las Vegas and the Ivanpah Dry Lake.

All content from Kiddle encyclopedia articles (including the article images and facts) can be freely used under Attribution-ShareAlike license, unless stated otherwise. Cite this article:
Southern Nevada Facts for Kids. Kiddle Encyclopedia.