Pahrump is an unincorporated town in Nye County, Nevada, United States. As of 2010 the population was 36,441, making it the largest settlement in the county.

Pahrump was originally inhabited by the Southern Paiute. It was slowly inhabited by settlers in the late 19th century. They reportedly chose the name for Pahrump after the original indigenous name Pah-Rimpi, or "Water Rock," so named because of the abundant artesian wells in the valley. Because of the artesian wells, the new inhabitants of Pahrump Valley began a number of large ranch-style holdings, mostly over 1000 acres (4 km²) in size. On the ranches, alfalfa and cotton were grown, and livestock were raised. 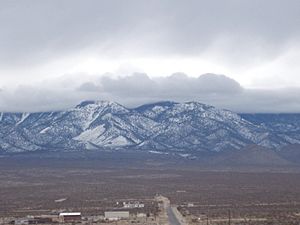 View of the mountains from town

Until the 1960s, Pahrump had no telephone service except a radio transmitter phone in a phone booth next to the small market, and there were no paved roads in or out of the Pahrump Valley. However, as Las Vegas grew, real estate speculation became more popular in the area, which led to increased interest in Pahrump. This led to the introduction of telephone service and the construction of a paved highway, from Las Vegas to Pahrump, during the late 1960s. Later, this road (NV 160) was extended from Pahrump northward to US 95, near Amargosa Valley. A second paved road (NV 372) was introduced that went from Pahrump to neighboring Shoshone, California, which provided a link to the Death Valley area, as well as a shorter route to those wishing to travel to Los Angeles or other areas in California. In the fifties and sixties, there was a two-room elementary school and the high school students went to Shoshone. In 1974, Pahrump's first high school, Pahrump Valley High School was constructed.

Since the late 1970s, Pahrump has grown almost exponentially, increasing from about 2,000 residents in 1980 to 36,000 in 2010. Pahrump is an archetypal example of an exurb. Almost all significant agriculture has ceased in the valley and the surface aquifers have been filled up over the years. Pahrump has also attracted a number of notable residents; including paranormal talk radio host Art Bell, and Michael Jackson, who purchased a home in the area in 2008, where he briefly had a home studio and home schooled his three children.

Notable businesses in the area include Front Sight Firearms Training Institute, the Spring Mountain Motor Sports Ranch, and the former Dragon Cloud Dojo, which closed March 1, 2016. In addition, there are several wineries including Sander's Family Winery and Pahrump Valley Winery.

Like many communities in Nevada, Pahrump has an unincorporated town status, with a limited government that manages land use planning, recreation, and fire, while leaving most services to Nye County. In May 2009, the town board set up an advisory board to study incorporating Pahrump as a town or city.

On November 15, 2006, the Pahrump town board voted for an ordinance declaring English the official language of business, forbidding the display of foreign flags and denying any benefits to illegal aliens. A measure in the ordinance requires an American flag to be displayed above any other flag, regardless of what organization, nation or government it represents. This law was repealed on February 13, 2007. In 2012 the citizens of Pahrump voted to disband the Town Board form of government in favor of becoming an advisory board under the County Commissioners. It will be finalized 2014 when the incumbent elected members' terms expire. Per the Town of Pahrump website, the elected Pahrump Town Board was disbanded as of January 5, 2015. 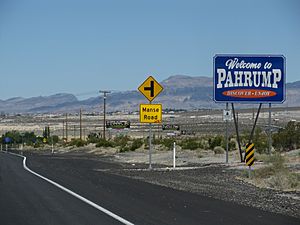 According to the United States Census Bureau, the CDP has a total area of 297.9 sq mi (771.5 km2), all of which is land. By area, it is the largest CDP in the United States outside of Alaska, although it ranks only eleventh nationally, since the largest ten are all in Alaska. The area lies in the Mojave Desert. 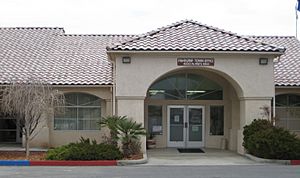 There were 10,153 households out of which 24.2% had children under the age of 18 living with them, 58.2% were married couples living together, 7.5% had a female householder with no husband present, and 29.8% were non-families. 23.5% of all households were made up of individuals and 10.5% had someone living alone who was 65 years of age or older. The average household size was 2.42 and the average family size was 2.83.

All content from Kiddle encyclopedia articles (including the article images and facts) can be freely used under Attribution-ShareAlike license, unless stated otherwise. Cite this article:
Pahrump, Nevada Facts for Kids. Kiddle Encyclopedia.