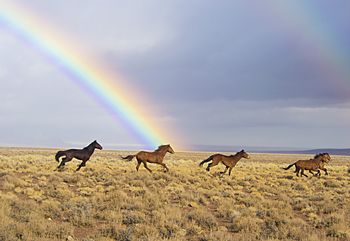 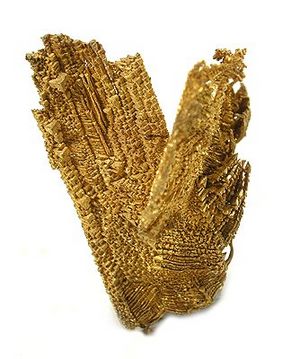 Gold specimen from the Round Mountain Gold Mine.

Nye County is a county located in the U.S. state of Nevada. As of the 2010 census, the population was 43,946. Its county seat is Tonopah. At 18,159 square miles (47,030 km2), Nye is the largest county by area in the state and the third-largest county in the contiguous United States (thus excluding the boroughs of Alaska).

In 2010, the center of population of Nevada was located in southern Nye County, very near Yucca Mountain.

The Nevada Test Site and proposed Yucca Mountain nuclear waste repository are located in the southwestern part of the county, and are the focus of a great deal of political and public controversy in the state. The federal government manages 92 percent of the land in the county. A 1987 attempt to deposit the nuclear waste resulted in the creation of Bullfrog County, Nevada, which was dissolved two years later.

The county has no incorporated cities. The seat of government in Tonopah is 160 miles (260 km) from Pahrump, where about 86 percent of the county's population resides. Nye County is nicknamed "The Kingdom of Nye" from the radio program Coast to Coast AM, created by Pahrump resident Art Bell.

Nye County was established during the American Civil War in 1864 and named after James W. Nye. He served as the first governor of the Nevada Territory and later as a U.S. Senator after it was admitted as a state. The first county seat was Ione in 1864, followed by Belmont in 1867, and finally by Tonopah in 1905.

The county's first boom came in the early 20th century, when Rhyolite and Tonopah, as well as Goldfield in nearby Esmeralda County, all had gold and silver mining booms. In 1906, Goldfield had 30,000 residents, Tonopah had nearly 10,000 people, and Rhyolite peaked at about 10,000. These cities were linked by the Tonopah and Tidewater Railroad.

After the boom died, Nye County withered. By 1910, the population had plummeted to about 7,500 before sinking to near 3,000 in the middle of the century. It was not until development at the military test site, increasing employment and resources that the population stabilized. After the 1990s, when Pahrump became a bedroom community for Las Vegas, it had high rates of population growth.

From time to time, there have been discussions of moving the county seat south to Pahrump, or splitting off the southern portion of the county, but neither of these ideas appears to have sufficient support at the county or state government level.

From 1987 to 1989, Bullfrog County, Nevada, was split off from Nye County territory to form a separate political region. The population of Bullfrog County was 0; the county's creation was strictly a political maneuver to support plans for a nuclear waste storage facility in the region. The Western Shoshone challenged this plan, saying they had never ceded land in this territory. No license was granted for the planned Yucca Mountain Repository. The Yomba Indian Reservation is located in this county, as one designated for some of the Western Shoshone people. The Yomba Band of the reservation is a federally recognized tribe.

Nye County is located in south central Nevada. Nye is the largest county in Nevada and is the third-largest county in the contiguous United States, after San Bernardino County in California and Coconino County in Arizona. With a land area of 11,560,960 acres (46,785.5 km2), Nye County is larger than the combined total area of Massachusetts, Rhode Island, New Jersey, and Delaware. Of this vast land area, only 822,711 acres (3,329.39 km2), or just over seven percent of the total, is private land; the majority of the county's land are public lands managed by the federal government. Before the Treaty of Ruby Valley, all this area was controlled by the Western Shoshone people, who say they never ceded territory here. According to the United States Census Bureau the county's Census Tract 9805, with a land area of 4,225.415 square miles (10,943.77 km2), comprising the Nevada Test Site and Nye County's portion of the Nevada Test and Training Range, is the largest census tract in the United States that has absolutely no resident population (as of the 2000 census).

Las Vegas, in Clark County, is 100 miles (160 km) southeast of Yucca Mountain. Many Pahrump residents commute 60 miles (97 km) each way to Las Vegas via Nevada State Route 160, which for much of its length is a four-lane divided highway.

Nye County has a long stretch of U.S. Route 95, the main road connecting the state's population center in Las Vegas with the state capital in Carson City. Beatty and Tonopah both rely heavily on through traffic to sustain their economies. As of 2006, an average of 2,000 cars daily traveled U.S. 95 near Tonopah.

In 2006 there were 42,693 people living in Nye County, representing a growth of 31.3% since 2000. This was slightly faster growth rate than recorded during the same period for Clark County, where Las Vegas is located. 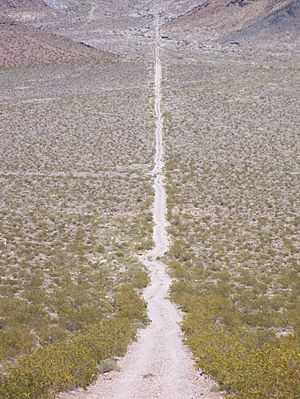 Road from Carrara, Nevada towards the marble quarry in the background.

Nye County was a featured location in two episodes of Studio 60 on the Sunset Strip.

Nye County was one of the broadcast locations of American veteran radio broadcaster Art Bell, who was famous for hosting Coast to Coast AM and Art Bell's Dark Matter. He is now on hiatus from broadcasting and resides in the county.

Many episodes from the 1950s Television show "State Trooper" take place in both Tonopah and Goldfield.

All content from Kiddle encyclopedia articles (including the article images and facts) can be freely used under Attribution-ShareAlike license, unless stated otherwise. Cite this article:
Nye County, Nevada Facts for Kids. Kiddle Encyclopedia.