Beatty (pronounced BAY-dee) is an unincorporated town along the Amargosa River in Nye County in the U.S. state of Nevada. U.S. Route 95 runs through the town, which lies between Tonopah, about 90 miles (140 km) to the north and Las Vegas, about 120 miles (190 km) to the southeast. State Route 374 connects Beatty to Death Valley National Park, about 8 miles (13 km) to the west.

Before the arrival of non-indigenous people in the 19th century, the region was home to groups of Western Shoshone. Established in 1905, the community was named after Montillus (Montillion) Murray "Old Man" Beatty, who settled on a ranch in the Oasis Valley in 1896 and became Beatty's first postmaster. With the arrival of the Las Vegas and Tonopah Railroad in 1905, the town became a railway center for the Bullfrog Mining District, including mining towns such as nearby Rhyolite. Starting in the 1940s, Nellis Air Force Base and other federal installations contributed to the town's economy as did tourism related to Death Valley National Park and the rise of Las Vegas as an entertainment center.

Beatty is home to the Beatty Museum and Historical Society and to businesses catering to tourist travel. The ghost town of Rhyolite and the Goldwell Open Air Museum (a sculpture park), are both about 4 miles (6 km) to the west, and Yucca Mountain and the Nevada Test Site are about 18 miles (29 km) to the east.

Before the arrival of non-indigenous explorers, prospectors, and settlers, Western Shoshone in the Beatty area hunted game and gathered wild plants in the region. It is estimated that the 19th-century population density of the Indians near Beatty was one person per 44 square miles (110 km2). By the middle of the century, European diseases had greatly reduced the Indian population, and incursions by newcomers had disrupted the native traditions. In about 1875, the Shoshone had six camps, with a total population of 29, along the Amargosa River near Beatty. Some of the survivors and their descendants continued to live in or near Beatty, while others moved to reservations at Walker Lake, Reese River, Duckwater, or elsewhere.

Beatty is named after "Old Man" Montillus (Montillion) Murray Beatty, a Civil War veteran and miner who bought a ranch along the Amargosa River just north of the future community and became its first postmaster in 1905. The community was laid out in 1904 or 1905 after Ernest Alexander "Bob" Montgomery, owner of the Montgomery Shoshone Mine near Rhyolite, decided to build the Montgomery Hotel in Beatty. Montgomery was drawn to the area, known as the Bullfrog Mining District, because of a gold rush that began in 1904 in the Bullfrog Hills west of Beatty. 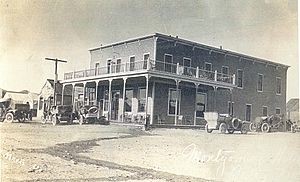 The Montgomery Hotel in 1905. It was owned by Bob Montgomery, namesake of the Montgomery-Shoshone Mine in nearby Rhyolite.

During Beatty's first year, wagons pulled by teams of horses or mules hauled freight between the Bullfrog district (that included the towns of Rhyolite, Bullfrog, Gold Center, Transvaal, and Springdale) and the nearest railroad, in Las Vegas, and by the middle of 1905, about 1,500 horses were engaged in this business. In October 1906, the Las Vegas and Tonopah Railroad (LV&T) began regular service to Beatty; in April 1907, the Bullfrog Goldfield Railroad (BG) reached the community, and the Tonopah and Tidewater (T&T) line added a third railroad in October 1907. The LV&T ceased operations in 1918, the BG in 1928, and the T&T in 1940. Until the railroads abandoned their lines, Beatty served as the railhead for many mines in the area, including a fluorspar mine on Bare Mountain, to the east.

Beatty's first newspaper was the Beatty Bullfrog Miner, which began publishing in 1905 and went out of business in 1909. The Rhyolite Herald was the region's most important paper, starting in 1905 and reaching a circulation of 10,000 by 1909. It ceased publication in 1912, and the Beatty area had no newspaper from then until 1947. The Beatty Bulletin, a supplement to the Goldfield News, was published from then through 1956.

Beatty's population grew slowly in the first half of the 20th century, rising from 169 in 1929 to 485 in 1950. The first reliable electric company in the community, Amargosa Power Company, began supplying electricity in about 1940. Phone service arrived during World War II, and the town installed a community-wide sewer system in the 1970s. When a new mine opened west of Beatty in 1988, the population briefly surged from about 1,000 to between 1,500 and 2,000 by the end of 1990. Since the mine's closing in 1998, the population has fallen again to near its former level. 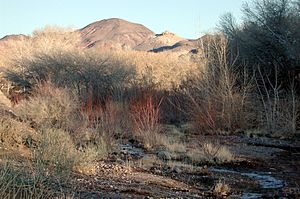 The Amargosa River flows through Beatty.

Nevada's main climatic features are bright sunshine, low annual precipitation, heavy snowfall in the higher mountains, clean, dry air, and large daily temperature ranges. Strong surface heating occurs by day and rapid cooling by night, and usually even the hottest days have cool nights. The average percentage of possible sunshine in southern Nevada is more than 80 percent. Sunshine and low humidity in this region account for an average evaporation, as measured in evaporation pans, of more than 100 inches (2,500 mm) of water a year.

From 1961 until 1972 the local Lions Club held annual burro races that were quite successful. Competitors came from all over the United States, Canada, and as far away as Iran. 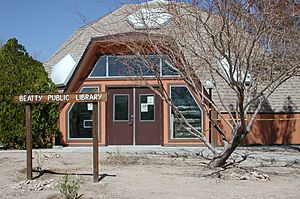 The community is home to the Beatty Museum and Historical Society. The ghost town of Rhyolite and the Goldwell Open Air Museum, a sculpture park, are about 4 miles (6 km) to the west. Bailey's Hot Springs and bathhouses are about 5 miles (8 km) north of Beatty in the Oasis Valley. In addition to highways, Beatty has a general aviation airfield, Beatty Airport, about 3 miles (5 km) south of downtown. Beatty Medical Center, which opened in 1977, provides family medicine and other services. The Beatty Library, a member of the Cooperative Libraries Automated Network, has a searchable online catalog. Beatty's combined elementary and middle schools, serving kindergarten through eighth grade, and Beatty High School, grades 9–12, are part of the Nye County School District. The Beatty Water and Sanitation District supplies drinking water from three wells to the town residents and treats the community's wastewater.

Panorama of Bare Mountain as seen from near State Route 374 between Beatty and Rhyolite. 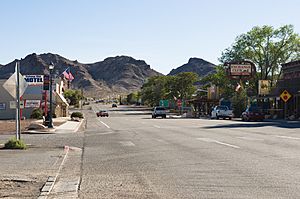 Early businesses in Beatty included the Montgomery Hotel, built by a mine owner in 1905, and freight businesses first centered on horse-drawn wagons and later on railroads serving the mining towns in the Bullfrog district. Beatty became the economic center for a large sparsely populated region. Aside from mining, other activities sustaining the community during the 1920s and 1930s included retail sales, gas and oil distribution, construction of Scotty's Castle, and the production and sale of illegal alcohol during Prohibition.

Nevada's legalization of gambling in 1931, the establishment of Death Valley National Monument in 1933, and the rise of Las Vegas as an entertainment center, brought visitors to Beatty, which became increasingly tourist-oriented.

As underground mining declined in the region, federal defense spending, starting with the Nellis Air Force Range in 1940 and the Nevada Test Site in 1950, also contributed to the local economy. However, in 1988, an open-pit mine and mill began operations about 4 miles (6.4 km) west of Beatty along State Route 374. Barrick Gold acquired the mine in 1994 and continued to extract and process ore at what became known as the Barrick Bullfrog Mine. At its peak, the mine employed 540 workers, many of whom lived in Beatty. The mine closed in 1998.

In 2004, the federal Environmental Protection Agency (EPA) named the closed Barrick Bullfrog mine site as one of six slated for pilot reclamation projects under the national Brownfields Mine-Scarred Land Initiative. A local group, the Beatty Economic Development Corporation (BEDC), in discussions with the EPA, suggested solar-power generation as a potential use for the site. Barrick Gold later transferred 81 acres (33 ha) of its land to Beatty. In February 2009, the New York Times published a Greenwire article suggesting that part of the economic stimulus money from the $787 billion American Recovery and Reinvestment Act might finance the Beatty project. "Studies show that the Beatty area has some of the best solar energy potential in the United States, as well as a high potential for wind-power generation," the Greenwire story said.

The Beatty Chamber of Commerce web site describes the community as the Gateway to Death Valley, a small rural locality that has "everything the desert visitor needs" including motels and recreational vehicle (RV) sites. Aside from tourism, businesses contributing to the local economy include mining, retail trade, public administration and gambling.

All content from Kiddle encyclopedia articles (including the article images and facts) can be freely used under Attribution-ShareAlike license, unless stated otherwise. Cite this article:
Beatty, Nevada Facts for Kids. Kiddle Encyclopedia.