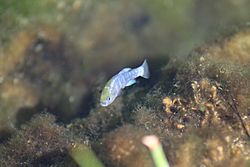 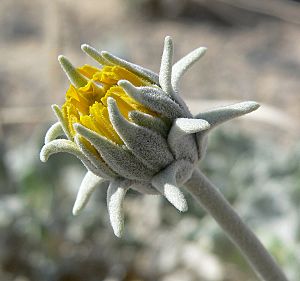 The Ash Meadows National Wildlife Refuge is a protected wildlife refuge located in the Amargosa Valley of southern Nye County, in southwestern Nevada. It is directly east of Death Valley National Park, and is 90 mi (140 km) west-northwest of Las Vegas.

The refuge was created on June 18, 1984, to protect an extremely rare desert oasis in the Southwestern United States. It is administered by the U.S. Fish and Wildlife Service.

Ash Meadows is within the Amargosa Desert, of the Mojave Desert ecoregion. The Amargosa River is a visible part of the valley hydrology, and has seasonal surface flow passing southwards adjacent to the preserve, to later enter Death Valley.

Ash Meadows provides a valuable and unprecedented example of desert oases habitats, that have become extremely uncommon in the southwestern deserts. The refuge is a major discharge point for a vast underground aquifer water system, reaching more than 100 mi (160 km) to the northeast. Water-bearing strata come to the surface in more than thirty seeps and springs, providing a rich, complex variety of mesic habitats.

Virtually all of the water at Ash Meadows is fossil water, believed to have entered the ground water system tens of thousands of years ago.

Numerous stream channels and wetlands are scattered throughout the refuge. To the north and west are the remnants of Carson Slough, which was drained and mined for its peat in the 1960s. Sand dunes occur in the western and southern parts of the refuge.

Ash Meadows National Wildlife Refuge was established to provide and protect habitat for at least twenty-six endemic plants and animals, meaning they are found nowhere else in the world. Four fish and one plant are currently listed as endangered species. 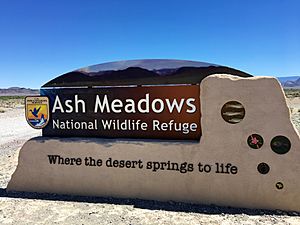 There are many plants endemic to Ash Meadows, including:

In 2010, Utah State University announced that a team from the school had discovered two new bee species in the genus Perdita at Ash Meadows.

All content from Kiddle encyclopedia articles (including the article images and facts) can be freely used under Attribution-ShareAlike license, unless stated otherwise. Cite this article:
Ash Meadows National Wildlife Refuge Facts for Kids. Kiddle Encyclopedia.