Round Mountain, Nevada facts for kids 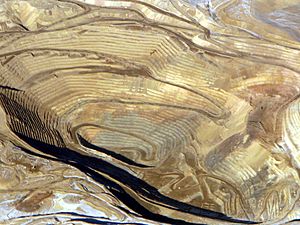 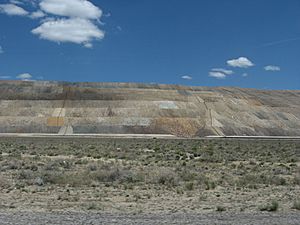 Round Mountain gold mine, heap-leach pads, 2008

Round Mountain is an unincorporated town in Nye County, Nevada, United States. The population of Round Mountain as of 2014 is 1,868. The town's ZIP code is 89045.

Round Mountain is best known for the Round Mountain Gold Mine, a large open pit heap-leach gold mine owned by Kinross Gold Corporation. The first gold production from the Round Mountain District was in 1906, and by 2006 the mine had produced over 10 million ounces of gold, worth about US$9.5 billion at 2009 prices. Ore reserves and resources total about 1.8 million ounces of gold as of the end of 2007. The gold occurs on the rim of an ancient collapsed caldera and is mainly fine-grained, with visible (and sometimes spectacular) gold occurring in structural intersections.

While the original town of Round Mountain remains near the current mining operation, the construction of Hadley served, in essence, as a relocation of the former community. As such, and with the new town existing as of, by, and for Round Mountain Gold, the surrounding areas, including both towns (occasionally including the town of Carvers as well), are often generically referred to as Round Mountain.

In Hadley there is an elementary school, a high school, a football field, a library, an indoor swimming pool, a golf course, three baseball fields, a fitness trail around the gym and baseball fields, a post office, a grocery store, two gym facilities (one with a weight room, treadmill room, and two racquetball courts), a recreational park, a gas station/laundromat, a bed & breakfast, a few churches, a fishing pond, two tennis courts, a community center, a fire department, a E.M.S. ambulance service, a RV park, storage units, a nail salon, horse corrals, a restaurant/bar, and many children's playgrounds.

In Carvers there is a gas station, a motel, storage units, a church, a rest stop, a restaurant/bar, a RV park, a roping arena, a museum, a hardware store, an auto parts store, a tire repair shop, a hair salon, and a small apartment complex. 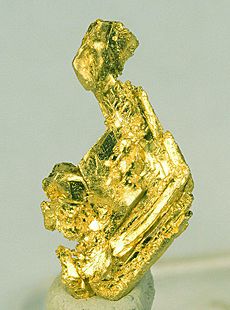 Crystalline gold specimen from Round Mountain Mine

Gold was discovered in 1905 and the town of Round Mountain established in 1906. The town started as an underground lode mining venture and continued all the way up to 1935. Surface mining with earth moving equipment lasted until 1940. In 1950 placer mining was done, with a dry land washing plant operating until 1957. Much hydraulic mining was done. Total district production was over $8 million. Some people still lived there 1965-1969.

Gold was discovered at Round Mountain in 1905 but it was not until earlier the following year that more substantial discoveries aroused interest in the area. High-grade gold ore was discovered on a hill known as Round Mountain. By mid-year, the population was close to 400. A number of major mining companies became active in the area and soon the town was given the name of Round Mountain. By 1907, there were daily stages running from Round Mountain to Tonopah. The town contained many wood structures containing mercantiles, saloons, brokerage agencies, a school and a library. In 1906, the first two mining companies to begin operations were the Round Mountain Mining Company and the Fairview Round Mountain Mines Company. The value of the ore produced by the Round Mountain Company during the first ten years (1906 to 1916) was a little more than $3 million. By the beginning of 1909 there were six mills operating in the district. Businesses included hotels, general stores, banks, restaurants, lodging houses, a school, a library, and a hospital. By 1939 the town’s population was still only 234. The value of total production through 1940 was $7.8 million. New surface operations on the side of Round Mountain began in 1970 and continue to this day.

All content from Kiddle encyclopedia articles (including the article images and facts) can be freely used under Attribution-ShareAlike license, unless stated otherwise. Cite this article:
Round Mountain, Nevada Facts for Kids. Kiddle Encyclopedia.