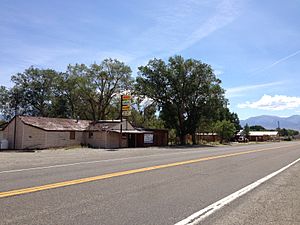 Businesses on SR 376 in Carvers

Carvers was founded by Gerald and Jean Carver. Gerald Carver came to Smoky Valley, Nevada in 1939 and purchased a 300-acre ranch. He later added 640 acres purchased from Mimosa Pittman, widow of Senator Key Pittman. When work began in 1947 on route 8A (now Nevada Route 376) it cut across a corner of their property and the Carvers decided to open a cafe and bar to take advantage of the increased traffic. The Rainbow Ranch Bar and Café opened in April 1948 and was renamed Carvers Station soon after.

All content from Kiddle encyclopedia articles (including the article images and facts) can be freely used under Attribution-ShareAlike license, unless stated otherwise. Cite this article:
Carvers, Nevada Facts for Kids. Kiddle Encyclopedia.