Belmont is a ghost town in Nye County, Nevada, United States along former State Route 82. The town is a historic district listed in the National Register of Historic Places. It is Nevada Historical Marker number 138.

Belmont was established following a silver strike in 1865. Other minerals, such as copper lead and antimony, were also mined in addition to the silver. The boom brought settlers in and the town of Belmont grew. In 1867, Belmont became the county seat of Nye County. The town boasted four stores, two saloons, five restaurants, livery stable, post office, assay office, bank, school, telegraph office, two newspapers, and a blacksmith shop. As the price of metals fluctuated, so did the fortunes of the town. By 1887, several of the mines closed. In 1905, the county seat of Nye County was relocated from Belmont to Tonopah. The mine dumps were reworked in the early part of the 20th century

During the 1870s it was known as a major mining boomtown producing silver, and was rumored to have a population of 15,000. Like many towns which are now ghost towns, this one lasted for only a short time. 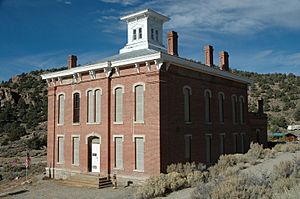 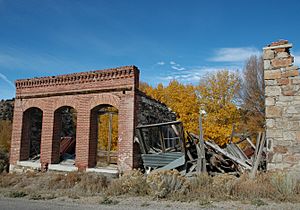 Some of the buildings are still standing, including the courthouse, the Cosmopolitan Saloon, the Monitor-Belmont Mill, and the combination mill. Currently, the old Combination Mine and Mill office and Belmont Courier Newspaper office and associated buildings are under restoration and preservation, known as the Philadelphia House, a reference to the name of the lodging house in the 1880s, and the Philadelphia mining district. This building complex was a business for about 15 years known as the Belmont Inn and Saloon, and also the Monitor Inn. Restoration volunteers are being solicited.

All content from Kiddle encyclopedia articles (including the article images and facts) can be freely used under Attribution-ShareAlike license, unless stated otherwise. Cite this article:
Belmont, Nevada Facts for Kids. Kiddle Encyclopedia.