Lander County is a county in the U.S. state of Nevada. As of the 2010 census, the population was 5,775. Its county seat is Battle Mountain.

Lander County was one of the original nine counties created in 1861. It was named for Frederick W. Lander, chief engineer of a federal wagon route through the area in 1857. He later served as Special Indian Agent in the area, and died during the Civil War in Virginia in 1862 at the rank of brigadier general. Created in 1861, Lander County sprang forth as the result of a mining boom on the Reese River, along the old pony express line; taking a considerable portion of Churchill and Humboldt counties with it. Eventually, Lander County would be known as the "mother of counties" since three other counties in Nevada were formed from it: Elko, White Pine, and Eureka. Its first county seat was Jacobsville in 1862 which was soon after moved to Austin in 1863 and finally Battle Mountain in 1979. 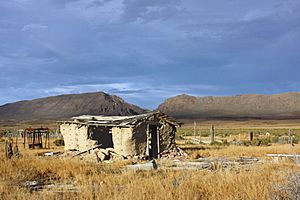 The 11,477 ft (3498 m) summit of Bunker Hill, located in the Toiyabe Range near the Nye County border, is the highest point in the county while the county's most topographically prominent peak is Mount Lewis.

Lander County has no incorporated communities. The following places are located in Lander County:

All content from Kiddle encyclopedia articles (including the article images and facts) can be freely used under Attribution-ShareAlike license, unless stated otherwise. Cite this article:
Lander County, Nevada Facts for Kids. Kiddle Encyclopedia.