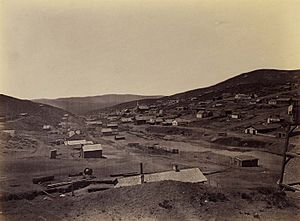 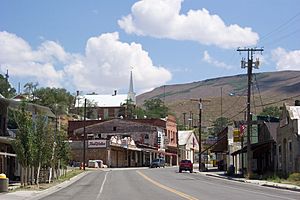 Austin is a small, unincorporated community and census-designated place in Lander County, Nevada, United States. In 2010, its population was 192. It is located on the western slopes of the Toiyabe Range at an elevation of 6,605 feet (2,013 m). U.S. Route 50 passes through the town.

This area was long occupied by bands of the Western Shoshone people. The city of Austin was mapped out in 1862 by David Buell. This was during the American Civil War, and the Union was eager to find new sources of precious metals, especially gold, to support the war effort. The city was named after Buell's partner, Alvah Austin, during a silver rush. The valued metal was reputedly found when a Pony Express horse kicked over a rock and observers noticed the silver. By summer 1863, Austin and the surrounding Reese River Mining District had a population of more than 10,000, mostly European Americans attracted to the silver boom. It was designated as the county seat of Lander County. (In 1979, after the center of population had shifted, the county seat was shifted to Battle Mountain.) In 1864, the town launched Reuel Colt Gridley's impromptu fundraising drive that raised over $250,000 for wounded Civil War veterans, by repeatedly auctioning a sack of flour.

The Nevada Central Railroad was built to connect Austin with the transcontinental railroad at Battle Mountain in 1880. However, by that time the silver boom was almost over. Major silver production ended by 1887, although there was a slight revival in the 1910s. In the mid-1950s there was a great deal of interest in uranium deposits in the area, to fuel the emerging nuclear industry, but the ore proved to be of low quality.

Gold and silver mining has continued in the area sporadically and at generally low levels of production. High quality turquoise is still mined in the area in small quantities. This active turquoise mining, together with several shops that manufacture jewelry from local turquoise have made Austin a sort of Nevada Turquoise mecca.

Today Austin is a "living ghost town", a well-preserved example of an early Nevada mining town. It contains four churches; both the Catholic church and the Austin Methodist Church were built in 1866. The Methodist Church is now used as a community center. The Catholic Church, St. Augustine's, has been purchased and is being restored as a cultural center for Central Nevada. The Episcopal church, dedicated to St. George and considered by some to be the prettiest frontier church still standing, was built in 1878 and is still in regular use. These three churches are listed as Nevada Historical Marker 67.

The fourth church is a more recent building built by The Church of Jesus Christ of Latter-day Saints. The International Hotel, first built in Virginia City in 1859 and moved to Austin in 1863, still serves meals and drinks, but it does not rent out rooms (there is a motel across the street). The International Hotel is said to be the oldest in Nevada. Austin contains numerous other historical buildings, in various states of repair.

Stokes Castle, a strange three-story stone tower, is located just outside town. It was built in 1897 by Anson Phelps Stokes, a wealthy eastern capitalist who had a financial interest in several of the local mines. It was occupied only for a month. Vacant and abandoned, it fell into disrepair.

In addition to Stokes Castle and the three above-named churches, a number of other structures in Austin are listed on the National Register of Historic Places. These include the Austin Cemetery, the old city hall, the Austin Masonic and Odd Fellows Hall, the Gridley Store, the former Lander County Courthouse, and Lander County High School, as well as the Austin Historic District. Toquima Cave, an archeological and prehistoric site near the town, is also listed on the Register.

The Austin silver deposits consist of numerous narrow (often only several inches in width) quartz veins hosted in monzonite rock. The main ore minerals are sulfides that contain silver, including large quantities of galena and tetrahedrite. Oxidized ore, which was very shallow, included silver chloride (chlorargyrite) which was easily reduced to metallic silver, although these oxidized deposits were exhausted quickly. The deeper sulfide (hypogene) ore was much more difficult to work and had to be roasted prior to amalgamation. Milling and concentration was used to separate the silver-containing sulfides from the barren quartz. Because of the added expense of this kind of processing along with the narrow veins, only high grade ores could be profitably worked in Austin.

The Austin veins are of an older age and were formed at a greater depth than many other silver districts in Nevada, such as the epithermal veins of Virginia City (Comstock Lode). In addition, the value of the Austin ores was largely (with several exceptions) silver (with significant base metals (lead, zinc and copper)) with very little gold, whereas most epithermal veins have highly significant gold.

All content from Kiddle encyclopedia articles (including the article images and facts) can be freely used under Attribution-ShareAlike license, unless stated otherwise. Cite this article:
Austin, Nevada Facts for Kids. Kiddle Encyclopedia.