Battle Mountain is a census-designated place (CDP) in Lander County, Nevada, United States. The population was 3,635 at the 2010 census. Though it has no legal status as a municipality, it still functions as the county seat of Lander County. Its primary economic base is gold mining and to a lesser extent, legalized gaming.

The town is located on Interstate 80 between Winnemucca and Elko. 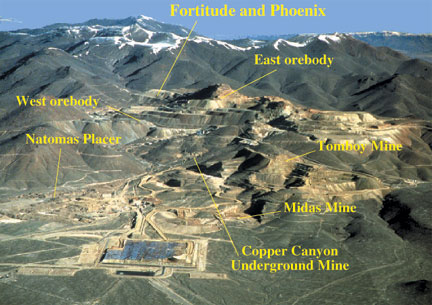 Gold and copper mines in the Battle Mountain Mining District

The Battle Mountain area was home to the Northern Paiute and Shoshone peoples. The area was noted by fur trappers in the 1820s and '30s. It served as a waypoint for westward-bound travel on the Emigrant Trail along the Humboldt River by 1845. According to local legends the name stems from confrontations between Native Americans and early settlers during the 1850s and '60s.

When copper ore was discovered in 1866 and mining began, the Central Pacific Railroad started a station to support the mining activity. In 1870 the railroad moved the Argenta station to Battle Mountain and established a townsite to serve the Battle Mountain copper and gold mining district.

Ulysses S. Grant spoke in the town in 1879 during his western speaking tour.

In a 1979 ruling, the Nevada Supreme Court moved the Lander County seat to Battle Mountain.

Chiefs Frank Temoke and Frank Brady refused the government's offer of a payoff under the 1863 Treaty of Ruby Valley at Battle Mountain on December 11, 1992.

The 2008 Wells, Nevada earthquake of 6.3 magnitude that affected the northeastern part of the state severely damaged one of the city's oldest historical buildings, the Lemaire Building, which was condemned.

The economic geologic zone is primarily in the Antler Sequence, consisting of the Middle Pennsylvanian Battle Formation, the Pennsylvanian to Permian Antler Peak Limestone, and the Permian Edna Mountain Formation. These Paleozoic rocks were intruded in the Tertiary by a granodiorite porphyry which generated the ore bodies as zones of disseminated sulfide minerals. These zones include copper-gold-silver next to the granodiorite, followed by a gold-silver zone, then a lead-zinc-silver zone. 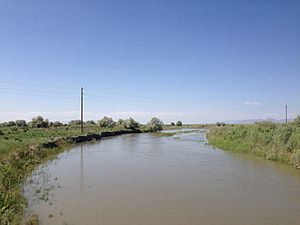 The Humboldt River in Battle Mountain

According to the United States Census Bureau, the community has a total area of 3.6 square miles or 9.3 square kilometres, all of it land. 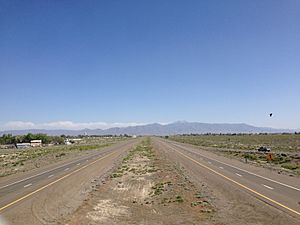 I-80 in Battle Mountain

Battle Mountain is the starting point of Nevada State Route 305 which heads southward to Austin, Nevada.

There were 1,053 households out of which 41.9% had children under the age of 18 living with them, 54.6% were married couples living together, 9.9% had a female householder with no husband present, and 30.5% were non-families. 25.2% of all households were made up of individuals and 4.8% had someone living alone who was 65 years of age or older. The average household size was 2.71 and the average family size was 3.28.

In December 2001, the Washington Post published an article by Gene Weingarten titled "Why Not The Worst?" that popularly titled Battle Mountain as the "Armpit of America." The town used the unofficial title as a publicity opportunity, and hosted an annual "Armpit Festival" from 2002–2005, which was sponsored by Old Spice and awarded deodorant-themed prizes to participants.

On January 2, 2009, The New York Times released an article entitled "A Nevada Town Escapes the Slump, Thanks to Gold". The article regards the national economic depression and discusses Battle Mountain's economy.

"Thanks to Gold," miners were hostile towards efforts to collect fragments, but a 1.4-pound (630-gram) fragment of the Battle Mountain meteorite is currently undergoing analysis at JPL.

All content from Kiddle encyclopedia articles (including the article images and facts) can be freely used under Attribution-ShareAlike license, unless stated otherwise. Cite this article:
Battle Mountain, Nevada Facts for Kids. Kiddle Encyclopedia.