The Humboldt River is an extensive river drainage system located in north-central Nevada. It extends in a general east-to-west direction from its headwaters in the Jarbidge, Independence, and Ruby Mountains in Elko County, to its terminus in the Humboldt Sink, approximately 225 miles away in northwest Churchill County. Most estimates put the Humboldt River at 290 miles (470 km) long however, due to the extensive meandering nature of the river, its length is more closely estimated at 380 miles (612 km). It is located within the Great Basin Watershed and is the third longest river in the watershed behind the Bear River at 355 miles (570 km) and the Sevier River at 325 miles (523 km). The Humboldt River Basin is the largest sub-basin of the Great Basin encompassing an area of 16,840 square miles (43,615 km2). It is the only major river system wholly contained within the state of Nevada.

It is the only natural transportation artery across the Great Basin and has historically provided a route for westward migration. Additionally, two major railroad routes loosely follow its path. Interstate 80 follows the course of the river from its source to its mouth. The river is named for the German naturalist Alexander von Humboldt. 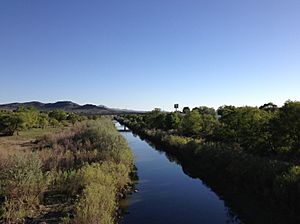 View southwest from footbridge in Elko, the largest city along the Humboldt

The region of the river in northern Nevada was sparsely inhabited by Numic-speaking people at the time of the arrival of European American settlers. The region was little known by non-indigenous peoples until the arrival of fur trappers in the early 19th century.

The first recorded sighting of the river was on November 9, 1828, by Peter Skene Ogden of the Hudson's Bay Company, during his fifth expedition to the Snake Country. Odgen came southward along the Little Humboldt, encountering the main river at the confluence near Winnemucca. Ogden explored the river for several hundred miles, blazing a trail along it and making the first known map of the region. He initially named the river "Unknown River", due to the source and course of the river still being unknown to him, and later "Paul's River", after one of his trappers who died on the expedition and was buried on the river bank. He later changed it again to "Mary's River," named after the Native American wife of one of his trappers, which later somehow became "St. Mary's River". However, in 1829 he suggested that "Swampy River" best described the course he had traversed. In 1833 the Bonneville–Walker fur party explored the river, naming it "Barren River". Washington Irving's 1837 book describing the Bonneville expedition called it "Ogden's River", the name used by many early travelers. By the early 1840s the trail along the river was being used by settlers going west to California.

In 1841 the river (then known as Mary's River) first became the route of the California Trail with the Bartleson–Bidwell Party, later to become the primary land route for migrants to the California gold fields. In 1845 the river was explored by John C. Frémont, who made a thorough map of the region and gave the river its current name. In 1869 the river was used as part of the route of the Central Pacific segment of the Transcontinental Railroad.

In the 20th century, the valley of the river became the route for U.S. Route 40, later replaced by Interstate 80. In the latter part of the 20th century, about 45,000 people lived within 10 miles (16 km) of the river, roughly a third of the population at that time of the State of Nevada outside of Western Nevada and Southern Nevada, before the rapid 21st century growth of Southern Nevada changed these population figures. 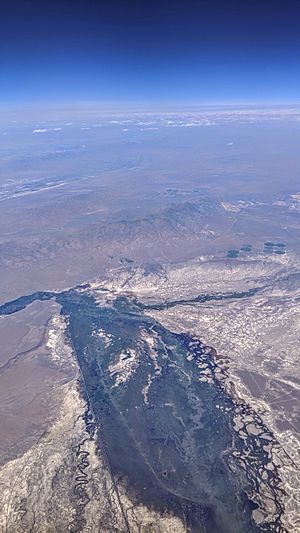 Aerial view of the Humboldt River's intermittent wetlands at Red House, Nevada, between Battle Mountain and Winnemucca in Humboldt County, in June 2019, a wet year

The source of the main stem of the river is a spring called Humboldt Wells at the northern tip of the East Humboldt Range, just outside the city of Wells. The river flows west-southwest through Elko County past the communities of Elko and Carlin. Approximately 15 miles (24 km) upstream from Elko, the river receives the North Fork of the Humboldt River, and receives the South Fork approximately 7 miles (11 km) downstream of Elko.

In northern Eureka County it passes through Palisade Canyon between the south end of the Tuscarora Mountains and the north end of the Shoshone Range. At Battle Mountain the river turns northwest for approximately 50 miles (80 km), then west at Red House and past Golconda and a spur of the Sonoma Range. It merges with the Reese River near Battle Mountain, and receives the Little Humboldt River approximately 5 miles (8 km) upstream from Winnemucca.

Past the junction with the Little Humboldt, the river turns southwest, flowing past Winnemucca and through Pershing County, along the western side of the Humboldt Range and the West Humboldt Range. In central Pershing County, the Rye Patch Dam impounds the river, forming the Rye Patch Reservoir, which stores water to irrigate farms near Lovelock, 22 miles (35 km) downstream. The Humboldt empties into an intermittent lake in the Humboldt Sink on the border between Pershing and Churchill counties, approximately 20 miles (32 km) southwest of Lovelock.

The river gains most of its water from snowmelt in mountains in the eastern part of the watershed, most importantly the Ruby Mountains, Jarbidge Mountains, and Independence Mountains. River flow generally decreases downstream to the west, in part due to the removal of water from the river for irrigation, especially near Lovelock. Stream-gauge measurements undertaken by the United States Geological Survey suggest that Palisade Canyon, between Carlin and Beowawe, is the point where the river's flow ceases to increase and begins to decrease. Also, since the Humboldt's water comes almost exclusively from snowmelt, its flow is highly variable from season to season (peak flow occurs during the spring melt) and from year to year (depending on the amount of snow every winter)

North American beaver (Castor canadensis) seem to have been making a comeback in Elko County possibly due to less fur trapping combined with reduced consumption of riparian willow and other vegetation by cattle. Maggie and Susie Creeks, which enter the Humboldt River near Carlin, have benefited from 20 years of work by ranchers, agencies, mines, and non-profit groups via improvements in grazing techniques and specific projects. A remote sensing project found 107 beaver dams along 20 miles (32 km) of Maggie Creek in 2006, which rose to 271 dams in 2010. Beaver dams are accelerating recovery of riparian vegetation and widening the riparian zone as they slow the water and collect sediment that used to be lost downstream. In five years, beaver ponds have increased the amount of impounded water on Maggie Creek from 9 miles (14 km) of stream to 16 miles (26 km). The impounded water is seeping into the ground and raising the water table. Newmont's shallow groundwater monitoring wells along Maggie Creek have shown about a 2-foot (0.6 m) rise over the past 17 years along Maggie Creek. Stream flows are more perennial, making more water available for wildlife and livestock and protecting populations of native trout. Maggie Creek has a Beaver Creek tributary which flows from Beaver Peak in the Tuscarora Mountains.

All content from Kiddle encyclopedia articles (including the article images and facts) can be freely used under Attribution-ShareAlike license, unless stated otherwise. Cite this article:
Humboldt River Facts for Kids. Kiddle Encyclopedia.