Wells is a small city in Elko County, in northeast Nevada in the western United States. The population was 1,292 at the 2010 census. Wells is located at the junction of Interstate 80 and U.S. Route 93, approximately 50 miles (80 km) east of Elko and is part of the Elko micropolitan area.

The site of Wells began as a place called Humboldt Wells along the trail to California. It was subsequently founded as a railroad town along the original Transcontinental Railroad, and was once a stopover for passenger trains. The Humboldt River has its source in springs and a swampy area just west of the city that today is called Humboldt Wells. In the late 19th century, Humboldt Wells was burning down, and in a frantic plea for help, a telegraph was sent that said, "Wells is burning". After this the town was rebuilt and simply referred to as 'Wells'. 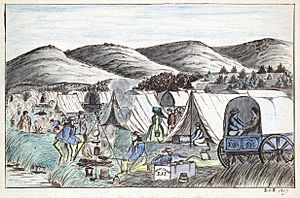 An encampment of tents and covered wagons on the California Trail along the Humboldt River, 1859, at a location near present-day Wells, Nevada. Digitally restored.

The Lone Star Motel located in Wells was used in the 2001 film Joy Ride for a critical scene. 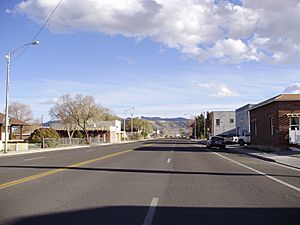 Wells is located by the intersection of Interstate 80 and U.S. Route 93.

There were 525 households, out of which 35.4% had children under the age of 18 living with them, 52.6% were married couples living together, 9.7% had a female householder with no husband present, and 32.8% were non-families. 28.8% of all households were made up of individuals, and 9.5% had someone living alone who was 65 years of age or older. The average household size was 2.56 and the average family size was 3.14.

Wells has a public library, a branch of the Elko-Lander-Eureka County Library System.

All content from Kiddle encyclopedia articles (including the article images and facts) can be freely used under Attribution-ShareAlike license, unless stated otherwise. Cite this article:
Wells, Nevada Facts for Kids. Kiddle Encyclopedia.