Elko County is a county in the northeastern corner of Nevada, United States. As of the 2010 census, the population was 48,818. Its county seat is Elko. The county was established on March 5, 1869, from Lander County.

Elko County is the fourth-largest county by area in the contiguous United States, ranking lower when the boroughs of Alaska are included. It is one of only 10 counties in the U.S. with more than 10,000 square miles (25,900 km2) of area.

Elko County is part of the Elko, NV Micropolitan Statistical Area. It contains 49.8 percent of the Duck Valley Indian Reservation, set up in the late 19th century for the Shoshone-Paiute peoples; they are a federally recognized tribe. Although slightly more than 50% of the reservation is across the border in Owyhee County, Idaho, the majority of tribal members live on the Nevada side. The reservation's land area is 450.391 square miles (1,166.5 km2).

This area was long occupied by Native American tribes of the Plateau, particularly the Western Shoshone, Northern Paiute, and Bannock peoples. Their traditional ways were disrupted after European-American settlement, as the two cultures competed for resources and had differing conceptions of land use and property.

Elko County was established by European Americans in 1869 from Lander County; the name was taken from the name of the county seat, Elko.

In 1877 what became known as the Duck Valley Indian Reservation was established by presidential executive order for the Western Shoshone in this area, after they signed treaties with the United States. Later the Paiute became involved in the Bannock War, but after they were allowed to return from exile in Washington State, in 1886 another executive order was used to expand the reservation to accommodate them. The federally recognized tribe of the two peoples together conducts farming and ranching in this high desert territory.

The population of the county increased markedly in the late 20th century as the economy improved.

On March 14, 2014, the Bureau of Land Management sold 29 oil and gas leases for $1.27 million to a collection of six companies that included Noble Energy. The transaction was the first such in Nevada. 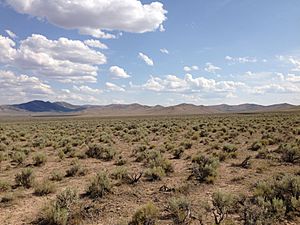 Sagebrush steppe in Elko County, Nevada along US 93. Much of the county looks essentially like this.

Except for West Wendover which is in the Mountain Time Zone, the county is in the Pacific Time Zone, though other communities such as Owyhee, Mountain City, Jarbidge and Jackpot unofficially observe Mountain Time as well due to their proximity to, and economic connections with, neighboring areas of Idaho.

A number of highways maintained by the Nevada Department of Transportation, some national in prominence, cross Elko County (see Major highways above). The county also maintains a network of county routes; however, many of them are unpaved and receive limited, if any, winter maintenance.

Transportation by means other than road vehicle is limited within Elko County. Commercial air service is available only at the Elko Regional Airport in Elko; the only destination currently served is Salt Lake City International Airport. Other public airports in Elko County include Jackpot Airport, Owyhee Airport and Wells Municipal Airport.

Amtrak passenger service is available from the unstaffed Elko station. Service is via the California Zephyr and is either eastbound or westbound, once a day. 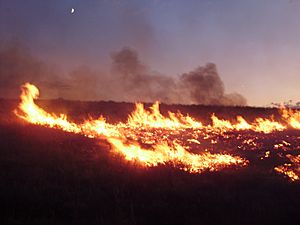 All content from Kiddle encyclopedia articles (including the article images and facts) can be freely used under Attribution-ShareAlike license, unless stated otherwise. Cite this article:
Elko County, Nevada Facts for Kids. Kiddle Encyclopedia.