Kids Encyclopedia Facts
Not to be confused with Toole County, Montana.

Tooele County ( too-WIL-ə) is a county in the U.S. state of Utah. As of the 2010 United States Census, the population was 58,218. Its county seat and largest city is Tooele. The county was created in 1850 and organized the following year.

The western half is mostly covered by the Great Salt Lake Desert and includes the city of Wendover (the immediate neighbor of West Wendover, Nevada) and Ibapah. Within the central section lies Skull Valley, between the Cedar and the Stansbury Mountains. It contains a few small towns as well as the Dugway Proving Ground. The population centers are on the eastern edge in the Tooele Valley, between the Stansbury and Oquirrh Mountains. This area contains the cities of Tooele and Grantsville and well as the unincorporated towns of Stansbury Park, Lake Point, and Erda. Tooele Army Depot is located on the southern edge of the valley. The Stockton Bar geologic feature separates Tooele Valley and Rush Valley, in which the towns of Stockton, Vernon, Faust, and Rush Valley are located. Additional small towns, Ophir and Mercur, are located in two canyons on the south western side of the Oquirrh Mountains.

Evidence of several indigenous Native American groups has been found in Tooele County, but only the western Shoshone-speaking Goshute tribe claim the desolate lands as their ancestral home. The Goshute's traditional territory includes most of modern Tooele County.

The Great Salt Lake Desert, which comprises much of the northern portion of the county, provided a major stumbling block for the ill-fated Donner-Reed Party in 1846. Its crusty sand slowed the group's wagons to such an extent that the group spent six days crossing its 80-mile length, severely sapping the group's resources.

In 1849 the first white settlers established permanent roots in the Tooele Valley. They were members of the Latter-day Saint emigration group which had arrived in 1847. Building a sawmill, the settlement was called "E.T. City" after LDS leader E.T. Benson. The territorial legislature first designated Tooele County—initially called "Tuilla"—in January 1850 with significantly different boundaries. It is speculated that the name derives from a Native American chief, but controversy exists about whether such chief lived. Alternate explanations hypothesize that the name comes from "tu-wanda", the Goshute word for "bear", or from "tule", a Spanish word of Aztec origins meaning "bulrush". Tooele was one of the six original counties in Deseret, which would become Utah Territory.

In 1855 the town of Richville was designated county seat, but it soon became clear that Tooele was much larger. In 1861 the territorial legislature allowed the county to select a new seat, and Tooele was selected.

Tension with native Goshutes plagued settlement in early Tooele County. In response to cattle thefts, a contingent of at least 50 men pursued Goshutes and attacked their camp in 1851, killing nine. The settlers suffered no casualties. Similar attacks occurred throughout the 1850s with natives typically being on the losing side. In 1859 Robert B. Jarvis, a U.S. Bureau of Indian Affairs representative, convinced some of the nomadic bands to congregate at a farm reservation called Deep Creek. The results looked promising, but Jarvis resigned in 1860 and support for the project disappeared, causing the farm to be abandoned. Jarvis' replacement, Benjamin Davies, noted the Goshutes had lost faith in the federal government, and recommended limiting further encroachments on Goshute land, but his suggestions were largely ignored.

Twenty-two overland stagecoach outposts were built in Goshute territory, often on the sites of rare natural springs. Goshute attacks on mail outposts escalated in 1860, resulting in dozens of deaths in alternating waves of raids. At the outbreak of the American Civil War, federal troops left the area leaving defense in the hands of the Nauvoo Legion until General Patrick E. Connor arrived in Salt Lake City from California in 1862.

Connor acted ruthlessly toward the natives. He killed over 300 Shoshone in Southern Idaho in 1863. Connor's men attacked Native American camps, sometimes indiscriminately, but through 1863 stage coach companies had lost 16 men and over 150 horses to depredations. A peace treaty was signed in 1863 which included an annuity of goods and US$1000 in compensation of killed game in exchange for an end to the hostilities, and use of routes through the natives' territories. The treaty did not cede Goshute control of land, but a follow-up agreement made in June 1865 did. 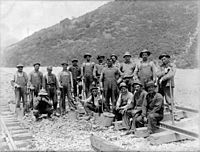 Minerals discovered in Tooele County caused its population to boom.

General Connor, who was anti-Mormon, also encouraged his troops to prospect for minerals. Connor believed that mining would bring non-Mormons to Utah Territory. After his men discovered gold, silver, lead, and zinc deposits in Tooele County in 1864 he was proven right. The Rush Valley Mining District was established by soldiers in the western Oquirrh Mountains and more than 100 claims were staked in the first year. Two new mining towns, Ophir and Lewiston ballooned to over 6000 people each in the 1870s, exceeding the population of Tooele and all the other Mormon settlements in the area.

From 1874 to 1879, non-Mormon politicians from the Liberal Party of Utah gained control of Tooele County, the first time any non-Mormons had success in Utah politics. Whimsically, they called the county the Republic of Tooele.

The 1874 election marked the first success of the anti-Mormon Liberal Party, which was organized in 1870. The party viewed the large non-Mormon mining population in the county as a natural environment for electoral success and campaigned fiercely in Tooele's mining districts leading up to the June 1874 election. The non-Mormon appointed governor of Utah Territory, George L. Woods, personally campaigned for the Liberals in Tooele County. 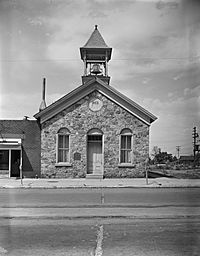 The old Tooele County Courthouse was site of a political power struggle in 1874.

The incumbent Mormon People's Party observed several Tooele polling places on election day and lodged complaints of fraud after the Liberal Party triumphed by about 300 votes out of 2200. The People's Party alleged that Liberal Party supporters had voted more than once, that many of them had not been residents for the required six months, and that they were not taxpayers—according to territorial law, only taxpayers could vote in elections. The People's Party called attention to the fact that about 2200 votes were cast in the election although only 1500 Tooele County property taxpayers were on record. Incumbents refused to yield control of the Tooele County recorder's office and the Tooele County Courthouse because of the alleged fraud.

Governor Woods predictably dismissed the complaints and certified the Liberal victory. Third District Court Judge James B. McKean ruled that no evidence showing illegal activity had been presented. McKean construed poll tax as within the meaning of being a taxpayer. Since no evidence was provided that there were over 300 carpetbaggers or repeat votes in the election, McKean sustained the tally and authorized deputy U.S. Marshals to install the Liberal candidates.

The recorder's office was seized when it was momentarily abandoned, but a contingent of People's Party supporters and incumbents held the county courthouse night and day. The marshals and Liberal Party candidates, outnumbered, attempted to negotiate with the armed and barricaded Mormons. Aware that any show of aggression could spark a battle, the parties were nonetheless unable to come to an agreement to hand over power.

Judge McKean issued an even more strongly worded injunction, and Brigham Young advised his followers that they had an obligation to obey the federal courts. The county courthouse was abandoned, thus beginning about five years of Liberal Party rule. However, the Utah territorial legislature, which had the last say on the qualifications of its members, refused to seat the Liberal Party representative from Tooele County.

The Liberals won an unopposed 1876 election.

In 1876, the territorial legislature passed bills requiring voter registration and requiring women's suffrage for local elections—women had been voting in territorial elections since 1870. The Liberal Party, typically supported by male miners casually interested in politics, opposed both measures. In 1878 the Liberal majority in Tooele County disappeared, and the People's Party regained control in 1879 after more than six months of Liberal procedural delays.

The Republic of Tooele era was characterized by subsequent politicians as one of excessive spending. The county was left with about $16,000 debt, significantly more than it started with.

Mining continued to play an important part in Tooele County into the 20th century, but the county benefited from two major military bases located in the western portion of the county. Wendover Air Force Base, now closed, was the training base of the Enola Gay crew, which dropped the first atomic weapon in 1945. The Tooele Army Depot, built in 1942, formerly housed the largest store of chemical and biological weapons, forty-five percent of the nation's, in the United States, at the Deseret Chemical Depot. Starting August 1996, the store was reduced by destruction in a controversial weapons incinerator, at the Tooele Chemical Agent Disposal Facility; the last such weapon was destroyed in January 2012.

Since the 1980s, much of Tooele County's economic prospects have centered around private hazardous waste disposal facilities. Between 1988 and 1993, hazardous waste landfills and incinerators have been installed at Clive and Aragonite. This, coupled with uranium mine tailings from Salt Lake County which were disposed in Tooele County in the 1980s, the presence of the Deseret Chemical Depot, and a high-polluting magnesium facility in Rowley, have contributed to a general perception of Tooele County as a "sacrifice zone" for unwanted wastes.

News coverage for the county is provided by the Tooele Transcript-Bulletin newspaper.

On September 8, 2004 the Genesis spacecraft crashed into the desert floor of the Dugway Proving Ground in Tooele County.

The western portion of the county is home to the Bonneville Salt Flats, traversed by Interstate 80 and the Wendover Cut-off, the former routing of the Victory Highway.

Covering vast amounts of the Great Salt Lake desert west of Salt Lake Valley, Tooele County is the second largest county in Utah and among the driest.

Heavy industry and the resulting pollution of the air, soil, and groundwater has affected the region in several ways. The US Environmental Protection Agency has reported that US Magnesium produces and discharges dangerous toxins and cancerous byproducts. In 2008, the US Government considered listing the area as a Superfund site. Tooele County was listed in 1989 as having the worst air in Utah, according to Federal agencies and environmental groups. The Tooele County Health Department notes that the chemical output of the heavy industry can be particularly dangerous in the winter, because the region's climate and setting create winter inversions, suspending the toxins in the air, and posing "serious health concerns."

Due to the history of toxic waste disposal in the area, Tooele County and Utah residents have opposed plans to dispose of nuclear waste in the county boundaries. A high level nuclear waste site proposed to be built at the Goshute Tribe Reservation in Skull Valley faced opposition until the plan slowly fizzled out Projects to dispose of depleted uranium at Energy Solution's Clive facility continue to cause controversy. 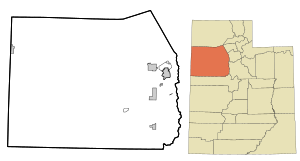 All content from Kiddle encyclopedia articles (including the article images and facts) can be freely used under Attribution-ShareAlike license, unless stated otherwise. Cite this article:
Tooele County, Utah Facts for Kids. Kiddle Encyclopedia.