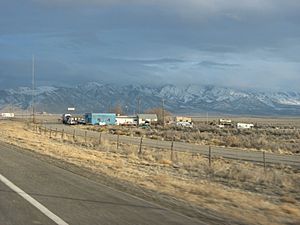 The few buildings at Delle

Delle is a small unincorporated community in Tooele County, Utah, along Interstate 80 near the Bonneville Salt Flats. The town has never had more than a few residents and has served primarily as a filling station along the I-80 corridor (and U.S. Route 40 corridor before it). Since the completion of the freeway, the town has essentially become a ghost town.

Delle was established in 1880 as a railroad village along the Western Pacific line, primarily as a water depot for steam engines in preparation for the trek across the famous salt flats. It was originally named Dalles Spring, from a French word referring to water, but railroad personnel later shortened the name for telegraphic efficiency. It possessed a water tower, a reservoir and numerous homes where railroad employees and their families resided from at least 1920 until 1940. The inhabitants were primarily Irish, Scot and Greek immigrants. Water was obtained from springs located as far as twelve miles away in nearby mountains (Delle Ranch located along the east bench of Skull Valley being the primary) and piped to the site. After diesel powered engines were introduced, Delle continued as a site station for railroad employees in charge of track upkeep between Wendover, Utah and Salt Lake City. As of the 1950 United States Census, the population was 174.

During the 1950s a filling station and small motel were constructed. The railroad homes were demolished, and the railroad abandoned the site.

Delle was owned by local businessman Karl Wm. Winsness Jr. for most of the 1970s, and water was hauled in by truck from Grantsville. Karl was injured in a propane explosion while remodeling the motel and cafe in the early 1980s.

All content from Kiddle encyclopedia articles (including the article images and facts) can be freely used under Attribution-ShareAlike license, unless stated otherwise. Cite this article:
Delle, Utah Facts for Kids. Kiddle Encyclopedia.