The Bonneville Salt Flats are a densely packed salt pan in Tooele County in northwestern Utah. The area is a remnant of the Pleistocene Lake Bonneville and is the largest of many salt flats located west of the Great Salt Lake. The property is public land managed by the Bureau of Land Management and is known for land speed records at the "Bonneville Speedway". Access to the flats is open to the public. 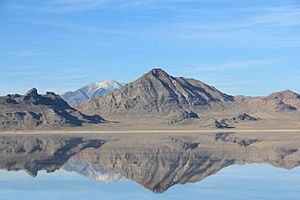 Geologist Grove Karl Gilbert named the area after Benjamin Bonneville, a U.S. Army officer who explored the Intermountain West in the 1830s. In 1907 Bill Rishel and two local businessmen tested the suitability of the salt for driving on by taking a Pierce-Arrow onto the surface of the flats.

A railway line across the Bonneville Salt Flats was completed in 1910, marking the first permanent crossing. The first land speed record was set there in 1914 by Teddy Tetzlaff.

Entertainment filmed at the salt flats include portions of Knight Rider (1982 television series), Warlock, Independence Day, SLC Punk, Cremaster 2 from Cremaster Cycle, The Brown Bunny, The World's Fastest Indian, Gerry, The Tree of Life, Top Gear, and Pirates of the Caribbean: At World's End. Furthermore, the Pontiac Bonneville (former flagship sedan of the Pontiac motor division), the Triumph Bonneville motorcycle, and the Bonneville International media company are all named for the salt flats. 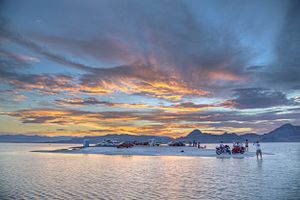 Campers at the Bonneville Salt Flats

Despite this, since 1998, the owners of the Wendover potash facility have worked diligently in conjunction with the BLM to undertake the Salt Laydown Project under which solid salt from ponds located south of highway I-80 is dissolved and pumped on to the Bonneville Salt Flats north of I-80. During the following summer months, heat from the sun evaporates the water and the precipitated salt becomes part of the race track surface. Since the onset of this project, more than 10.7 million tons of salt have been pumped on to the Bonneville Salt Flats. The Salt Laydown Project is now a required element of the facility’s operating plan. 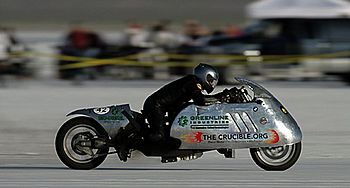 These three events welcome cars, trucks, and motorcycles. The "Bub Motorcycle Speed Trials" are for motorcycles only. World records are contested at the Mike Cook ShootOut in September. The Southern California Timing Association and the Utah Salt Flats Racing Association organizes and plans the multi-vehicle events, but all event promoters contribute to prepping and maintaining the salt. "Speed Week" events in August were canceled for the second year in a row in 2015, due to poor conditions of the salt in certain parts of the flats. The salt flats had been swamped by heavy rains earlier in the year, which usually happens, but the rains also triggered mudslides from surrounding mountains and onto a section of the flats used for the land-speed racing courses.

In 2004, the Stardust spacecraft released its sample-return capsule for a landing in the Bonneville Salt Flats after its flybys of asteroid 5535 Annefrank in 2002 and comet Wild 2 in 2004.

All content from Kiddle encyclopedia articles (including the article images and facts) can be freely used under Attribution-ShareAlike license, unless stated otherwise. Cite this article:
Bonneville Salt Flats Facts for Kids. Kiddle Encyclopedia.