The salt flats were first used for motor sports in 1912, but did not become truly popular until the 1930s when Ab Jenkins and Sir Malcolm Campbell competed to set land speed records. 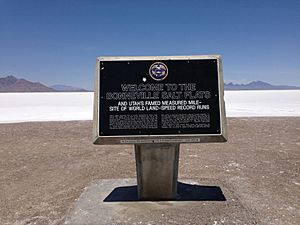 Salduro is a ghost town located on the south boundary of Bonneville Speedway, next to the Western Pacific Railroad. Salt Lake City newspapers ran an advertisement in 1914 for a special train to Salduro where the "fastest machines in the world will compete for the world's record on the famous salt beds, which afford the finest races in America. No dust." Salt Lake City mayor Samuel C. Park and Utah Governor William Spry attended. A rest area on Interstate 80 was built on the former settlement, and a plaque there commemorates the land speed records.

Historically, the speedway was marked out by the Utah Department of Transportation at the start of each summer. Originally, two tracks were prepared; a 10-mile (16 km) long straightaway for speed trials and an oval or circular track for distance runs, which was typically between 10 and 12 miles (16 and 19 km) long depending on the condition of the salt surface.

Since at least the 1990s, track preparations have been the responsibility of the event organizers. Days or weeks in advance, the track preparers identify an area best suited for their track layouts and begin grading the tracks. Surveyors are brought in to survey the timing trap distances. A day before racing begins, the track markers are added.

Originally, the straightaway was marked with a broad black line down its center. This was eventually changed to lines down either side, as the center line wore out too quickly. As the costs for painting the lines has gone up, organizations have switched to flags and cones as track markers. The last event to use black lines was Speed Week, August 2009.

The number of tracks and the timed sections for each track are set according to what is most beneficial for each event. Large public meets such as Speed Week run as many as four tracks with several timed miles, usually starting with the second mile and running to the fifth mile. Smaller meets that typically only run world record attempts will utilize a single track, with one timed mile and one timed kilometer in the middle of the track. Additional marks and cones indicate the end of the track and the position of timing equipment. 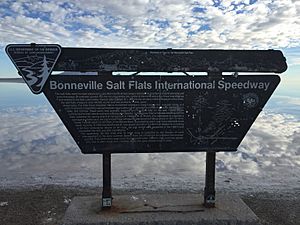 The annual Speed Week was cancelled in both 2014 and 2015, as were many land-speed racing events, due to deteriorating track conditions. Heavy rains caused a layer of mud from surrounding mountains to flow onto the flats, covering approximately 6 mi (9.7 km) of the track. Although another section of the flats would normally be used, nearby salt mining operations had reduced the size of the alternative track.

Though recent studies have been made (since 1960), the causes of this deterioration are not clear, although the evidence points toward both local climatic changes and salt mining. Some strategies were devised to revert the decreasing salt surface, such as pumping back salt, though this had no effect.

In August, the Southern California Timing Association and Bonneville Nationals Inc. organize Speed Week, the largest meet of the year, which attracts several hundred drivers who compete to set highest speed in a range of categories. Bonneville Speed Week has been taking place since 1949.

In late August, the Bonneville Motorcycle Speed Trials are held.

In September each year is the World of Speed, (similar to Speed Week) organized by the Utah Salt Flats Racing Association. The USFRA also meet on the first Wednesday of each month throughout the summer.

In October, the Southern California Timing Association puts on World Finals, a scaled-down version of Speed Week. This event tends to have cooler weather and often drier salt that Speed Week the prior month. There are less spectators and it tends to draw serious racers, as this event is the last chance to break a land speed record and be in the SCTA record book for that year.

Each year, there are usually a few private meets that are not publicized scattered among the larger public meets. 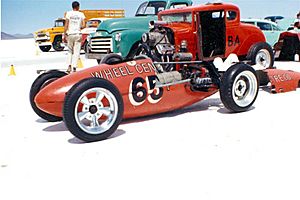 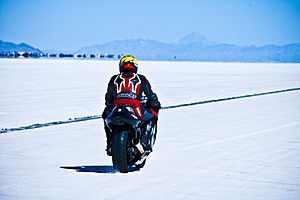 Several motor-paced racing speed records have been attempted at Bonneville.

In 2016, Denise Mueller-Korenek claimed a women's bicycle land speed record at 147 mph (237 km/h). She was coached by Howard. It is not clear which authority was supervising the record attempt.

All content from Kiddle encyclopedia articles (including the article images and facts) can be freely used under Attribution-ShareAlike license, unless stated otherwise. Cite this article:
Bonneville Speedway Facts for Kids. Kiddle Encyclopedia.