Utah County is a county in the U.S. state of Utah. As of the 2010 census, the population was 516,564, making it the second-most populous county in Utah. The county seat and largest city is Provo, which is the third-largest city in the state. The county was created in 1850 and named for the Spanish name (Yuta) for the Ute Indians.

In 2010, the center of population of Utah was located in Utah County, in the city of Saratoga Springs.

Utah County is one of seven counties in the United States to share the same name as the state it is located in (the other six counties being Arkansas County, Hawaii County, Idaho County, Iowa County, New York County, and Oklahoma County).

Utah Valley lies at the center of the county, lined by the mountains of the Wasatch Range on the east. Utah Lake occupies a large part of the valley. The elevation ranges from 4,487 feet (1,368 m) above sea level at the lake to 11,928 feet (3,636 m) at the peak of Mount Nebo. 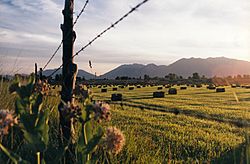 The five most reported ancestries in Utah County are: 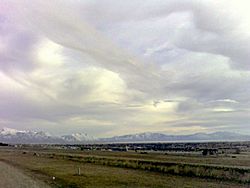 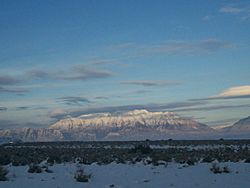 Mount Timpanogos in the Wasatch Range is visible from much of Utah County.

All content from Kiddle encyclopedia articles (including the article images and facts) can be freely used under Attribution-ShareAlike license, unless stated otherwise. Cite this article:
Utah County, Utah Facts for Kids. Kiddle Encyclopedia.