Spanish Fork is a city in Utah County, Utah, United States. It is part of the Provo–Orem Metropolitan Statistical Area. The 2020 census reported a population of 42,602. Spanish Fork, Utah is the 20th largest city in Utah based on official 2017 estimates from the US Census Bureau.

Spanish Fork was settled by Mormon pioneers in 1851. Its name derives from a visit to the area by two Franciscan friars from Spain, Silvestre Vélez de Escalante and Francisco Atanasio Domínguez in 1776, who followed the stream down Spanish Fork canyon with the objective of opening a new trail from Santa Fe, New Mexico, to the Spanish missions in California, along a route later followed by fur trappers. They described the area inhabited by Native Americans as having "spreading meadows, where there is sufficient irrigable land for two good settlements. Over and above these finest of advantages, it has plenty of firewood and timber in the adjacent sierra which surrounds its many sheltered spots, waters, and pasturages, for raising cattle and sheep and horses."

In 1851 some settlers led by William Pace set up scattered farms in the Spanish Fork bottom lands and called the area the Upper Settlement. However, a larger group congregated at what became known as the Lower Settlement just over a mile northwest of the present center of Spanish Fork along the Spanish Fork River. In December 1851 Stephen Markham became the branch president of the LDS settlers at this location.

In 1852 Latter-day Saints founded a settlement called Palmyra west of the historic center of Spanish Fork. George A. Smith supervised the laying out of a townsite, including a temple square in that year. A fort was built at this site. A school was built at Palmyra in 1852. With the onset of the Walker War in 1853, most of the farmers in the region who were not yet in the fort moved in. Some of the people did not like this site and so moved to a site at the mouth of Spanish Fork Canyon where they built a structure they called "Fort St. Luke". Also in 1854 there was a fort founded about 2 miles (3.2 km) south of the center of Spanish Fork that later was known as the "Old Fort".

Between 1855 and 1860, the arrival of pioneers from Iceland made Spanish Fork into the first permanent Icelandic settlement in the United States. The city also lent its name to the 1865 Treaty of Spanish Fork, where the Utes were forced by an Executive Order of President Abraham Lincoln to relocate to the Uintah Basin. 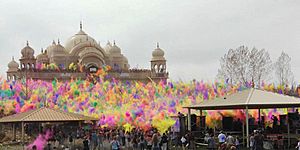 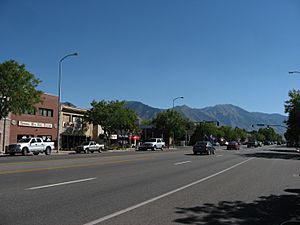 The Icelandic Association of Utah was founded in 1897 and hosts Iceland Days every year. The association picked June because Icelandic Independence Day, or National Day, is June 17.

Spanish Fork was the first Icelandic settlement in the United States, after Icelanders who joined the LDS Church were expelled from that country, according to association spokesman Glenn Grossman. Although other nationalities helped found the town, under colonizer Brigham Young, Icelanders kept their identity and celebrate it with their culture every year during the three-day event.

The Harvest Moon Hurrah is sponsored by the Spanish Fork Arts Council and takes place on a Saturday in September closest to the date of the full moon. Activities include children's crafts and activities, a giant paint-it-yourself mural, storyteller, old-fashioned family photos, caricature artist, clown and balloon animals, hay rides with live bluegrass band, and live entertainment. The 2009 Hurrah was headlined by Peter Breinholt, a popular local musician.

The Festival of Lights is a Christmas celebration that runs from Thanksgiving to New Years. It runs nightly from 6:00 p.m. - 10:00 p.m. Current prices in 2016: $7 per car; $20 per large passenger van or any vehicle towing a trailer ($20 per trailer); $30 per bus. They accept cash or card. It is at the Canyon View Park, 3300 E. Powerhouse Rd. It is just off of highway 6 to the south at the mouth of Spanish Fork Canyon. It is a drive-through light show. Christmas music is also broadcast on 99.9 FM during the festival.

Each year Spanish Fork hosts the "Fiesta Days" . The event is held every July, and is centered around the Pioneer Day Celebration. There are a number of entertainment events, including a rodeo, craft fair, duck race, and a fireworks show on the 24th.

The Sri Sri Radha Krishna Temple erected by a sizable South Asian community celebrates Holi and is known as The Festival of Colors where thousands of people gather from all over the country.

Spanish Fork has a predominantly LDS population. There are seventy-four LDS wards in nine stakes in the southern Utah Valley and a temple, the Payson Utah Temple, which opened in June 2015. The majority of residents are Members of The Church of Jesus Christ of Latter-day Saints just like all of Utah County.

There are other churches in town: the Presbyterian Church established a church and mission day school in 1882. The school functioned until the state school system was inaugurated in the early part of the twentieth century. Today there are nine public elementary schools, two intermediate, and two high schools of the Nebo School District.

A Lutheran church, established by immigrants from Iceland, was built on the east bench of Spanish Fork. There is also the Faith Baptist Church, a Baptist congregation.

A Roman Catholic church serves the Catholics of southern Utah Valley; many happen to be of Italian descent (see Utah Italians), Hispanics, Filipino Americans, and some Greek Catholics from the Balkans.

ISKCON, the international society of Krishna Consciousness, have built a temple in Spanish Fork, run by Caru Das, the temple priest. Indian Americans form a small but noticeable community in the Spanish Fork-Provo area (especially in the neighboring town of Springville).

In Utah Valley's historical settlement by immigrants, Scandinavians (most notably Icelanders); as well as Swiss people; Spanish Americans, Hispanics or Latinos; English Americans, Irish Americans and Scottish Americans are prevalent ethnocultural groups in Spanish Fork, and the nearby towns of Salem and Payson.

In September 2008, the Spanish Fork Wind Project was completed. This project, a 9-turbine wind energy project, can produce up to 2.1 megawatts at full production, and each of the nine turbines can power up to 1,200 homes. It is the utility scale wind farm producing electricity from wind power.

All content from Kiddle encyclopedia articles (including the article images and facts) can be freely used under Attribution-ShareAlike license, unless stated otherwise. Cite this article:
Spanish Fork, Utah Facts for Kids. Kiddle Encyclopedia.