Provo is the third-largest city in the U.S. state of Utah, located 43 miles (69 km) south of Salt Lake City along the Wasatch Front. Provo is the largest city and county seat of Utah County. It lies between the cities of Orem to the north and Springville to the south. With a population at the 2010 census of 112,488, Provo is the principal city in the Provo-Orem metropolitan area, which had a population of 526,810 residents at the 2010 census. It is the third-largest metropolitan area in Utah after Salt Lake City and Ogden-Clearfield.

The city is the location of Brigham Young University, a private higher education institution, which is operated by The Church of Jesus Christ of Latter-day Saints (LDS Church). Provo also has the largest Missionary Training Center for the LDS Church. The city is a focus area for technology development in Utah, with several billion dollar startups operating in Provo. Provo was the second city in the United States to work with Google Fiber. The city's Peaks Ice Arena was a venue for the Salt Lake City Winter Olympics in 2002. Sundance Resort is located 13 miles (21 km) northeast at Provo Canyon.

In 2015, Provo was cited among the "Best Small And Medium-Size Cities For Jobs," and Utah County, where Provo is the largest municipality, was named by the BLS for highest job growth for the year. In 2013, Forbes ranked Provo the No. 2 city on its list of Best Places for Business and Careers. Provo was ranked first for community optimism (2012), first for volunteerism (2008), and first in health/well-being (2014). Its metropolitan area was projected to have the greatest population increase in the 2010 United States Census (47%). 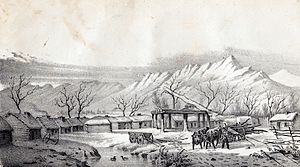 The area was originally called Timpanogots (meaning "rocky") and was inhabited by the Timpanogos (meaning "fish eaters"). It was the largest and most settled area in modern-day Utah. The ample food from the Provo River made the Timpanogos a peaceful people. The area also served as the traditional meeting place for the Ute and Shoshone tribes and as a spot to worship their creator.

Father Silvestre Velez de Escalante, a Spanish Franciscan missionary-explorer, is considered the first European explorer to have visited the area, in 1776. He was guided by two Timpanogos Utes, whom he called Silvestre and Joaquin. Escalante chronicled this first European exploration across the Great Basin desert. The Europeans did not build a permanent settlement, but traded with the Timpanogos whom they called Lagunas (lake people) or Come Pescado (fish eaters).

In 1847, the Mormon Pioneers arrived in the Salt Lake Valley, which was just north of Timpanogos Mountain. At first, they were friendly with the Mormons. But, as relations deteriorated with the Shoshoni and Utes because of land claims and stealing of livestock by the Indians, tensions rose. Because of the reported stolen goods of settlers by the Utes, Brigham Young gave a small militia orders "to take such measures as would put a final end to their [Indian] depredations in future.” This ended in what is known as the Battle Creek Massacre, in modern-day Pleasant Grove, Utah. The Mormons continued pushing into Timpanog lands. In 1849, 33 Mormon families from Salt Lake City established Fort Utah. In 1850, Brigham Young sent an army from Salt Lake to drive out the Timpanogos in what is called the Provo War. The ruthlessness of the Mormon invaders angered the Timpanog, which contributed to the Walker War and Black Hawk War. Fort Utah was renamed Provo in 1850 for Étienne Provost, an early French-Canadian trapper who arrived in the region in 1825. 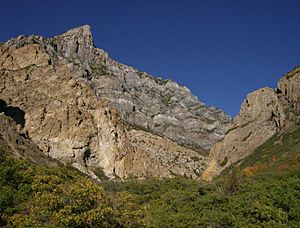 The Wasatch Range contains many peaks within Utah County along the east side of the Wasatch Front. One of these peaks, known as Y Mountain, towers over the city. There is a large hillside letter Y made of whitewashed concrete halfway up the steep mountain, built in the early part of the 20th century to commemorate Brigham Young University (original plans included construction of all three letters: BYU). Wild deer (and less frequently, cougars, and moose) still roam the mountains (and occasionally the city streets). The scenery allows for hiking, skiing, fishing and other outdoor activities.

A panoramic view of Provo after sunset, February 2014.

There were 31,524 households of which 34.8% had children under the age of 18 living with them, 55.4% were married couples living together, 8.2% had a female householder with no husband present, and 32.9% were non-families. 12.8% of all households were made up of a single individual, and 4.7% had someone living alone who was 65 years of age or older. The average household size was 3.24 and the average family size was 3.41.

There were 29,192 households of which 33.8% had children under the age of 18 living with them, 57.0% were married couples living together, 7.8% had a female householder with no husband present, and 31.7% were non-families. 11.8% of all households were made up of a single individual, and 4.6% had someone living alone who was 65 years of age or older. The average household size was 3.34 and the average family size was 3.40.

The residents of Provo are predominantly members of the LDS Church, commonly described as Mormons. According to data taken in 2000 by the ARDA, 88% of the overall population, and 98% of religious adherents in the Provo-Orem area are LDS. According to a study in 2015, the Provo-Orem metro area is about as dissimilar to the rest of America as possible. Weighing factors such as race, housing, income and education, the study ranked Provo-Orem 376th of 381 of the United States' largest cities in terms of resemblance to the country. 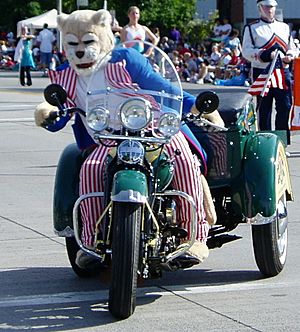 Cosmo the Cougar at America's Freedom Festival at Provo.

Every July, Provo hosts America's Freedom Festival at Provo which includes the Stadium of Fire at BYU. It is held in LaVell Edwards Stadium, home to Brigham Young University's NCAA football team. The Independence Day festivities are quite popular among local residents and have featured such notable figures as Bob Hope, David Hasselhoff, Reba McEntire, Mandy Moore, Huey Lewis and the News, Toby Keith, Sean Hannity, Fred Willard and Taylor Hicks. In 2015, the event included performances by Journey and Olivia Holt, and was hosted by the television personality Montel Williams.

Provo has two other large festivals each fall. Festival Latinoamericano is an annual family-oriented Labor Day weekend event in downtown Provo that offers the community a taste of the region's Hispanic culture through ethnic food, vendors, and performances.

The city has hosted an annual LGBT Provo Pride Festival since 2013. 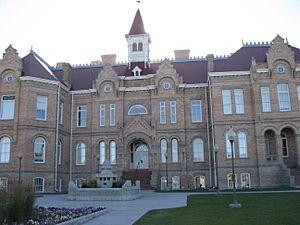 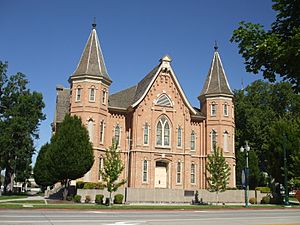 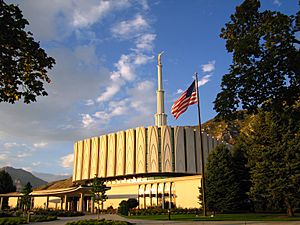 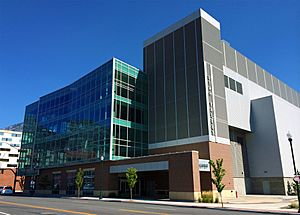 Covey Center for the Arts

The Covey Center for the Arts, a performing arts center, is located on 425 West Center Street. It features plays, ballets, art showcases and musical performances throughout the year. The size of the building is 42,000 total square feet. The main performance hall seats 670 people. There are three dance studios furnished with piano, ballet bars and mirrors. Another theater is the Brinton Black Box Theater that seats 60 for smaller more intimate events. There are also two art galleries: 1,620 square-foot Secured Gallery and the Eccles Gallery in the lower lobby.

Provo is the location of the LDS Church's largest Missionary Training Center. Each week some 475 LDS missionaries enter for 3–12 weeks of training before they depart for the mission field, becoming part of more than 58,000 in more than 120 countries. About 1,100 instructors (many returned missionaries) teach 62 languages. The center in Provo began construction in July 1974 and was completed in July 1976. The MTC was expanded in the early 1990s to become the largest of 17 such centers in the world.

The Provo City Library is a public library which occupies the building of the former Brigham Young Academy built in 1892. The building was added to the National Register of Historic Places in 1976. Its collection contains over 277,000 media. The library is located on University Avenue and 550 North.

Finished construction in 2013, the center provides a location for aquatic recreation next to the Provo Power plant.

The Provo Utah Temple is located at the base of Rock Canyon in Provo. This temple is among the busiest the LDS Churches due to its proximity to Brigham Young University and the Missionary Training Center.

The Provo City Center Temple used to be the Provo Tabernacle, an LDS tabernacle completed in 1898 that is owned by the LDS Church. It was almost completely destroyed by fire on December 17, 2010. Only the brick skeleton of the Provo Tabernacle remained at the corner of 100 South and University Avenue. On October 1, 2011, Thomas S. Monson, president of the LDS Church, announced that the Provo Tabernacle would be rebuilt using the surviving original exterior to serve as a second LDS temple in Provo. The completion of the new temple will make Provo only the second city with two temples within its city limits, the other being South Jordan, Utah. It is also only the second instance of a tabernacle being repurposed as a temple, the first being the Vernal Utah Temple.

The Utah Valley Convention Center opened in 2012. It has 83,578 square feet of combined meeting, pre-function and garden space. 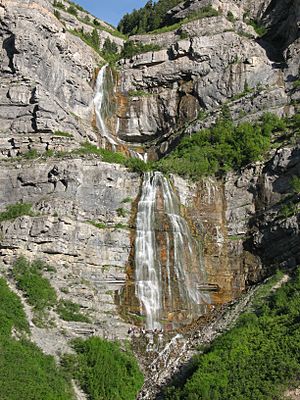 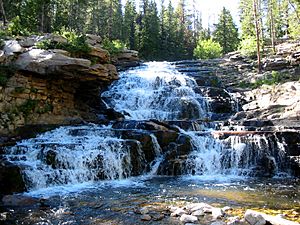 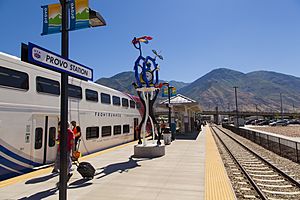 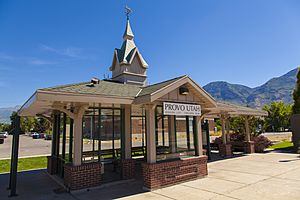 Interstate 15 runs along the west edge of Provo, connecting it with the rest of the Wasatch Front and much of Utah. US-89 runs northwest to southeast through the city as State Street, while US-189 connects US-89 with I-15, BYU, and Orem to the north. At the north edge of the city, US-189 heads northeast into Provo Canyon, where it connects with Heber.

All content from Kiddle encyclopedia articles (including the article images and facts) can be freely used under Attribution-ShareAlike license, unless stated otherwise. Cite this article:
Provo, Utah Facts for Kids. Kiddle Encyclopedia.