The flag of Provo, Utah, is the official flag of the city of Provo, Utah, United States. The present flag, featuring the city's logo on a light blue field, was adopted on January 6, 2015, after a multi-year debate to replace a previous one. The former flag, adopted in 1989, was ridiculed in particular for its perceived ugliness and its similarity to the Centrum logo, and was voted one of the worst American city flags by the North American Vexillological Association (NAVA).

The current city flag of Provo, Utah consists of a light blue field and the city's seal at the center.

The flag is described in section 1.05.010 of the municipal code.

The first flag of Provo was adopted in 1965, and consisted of a red and blue field with a stylized "P" (standing for "Provo") in the center. 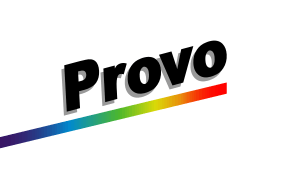 The second flag of Provo was adopted in 1985, after it was introduced by then-mayor Joe Jenkins based on a design by Stephen Hales. The flag consisted of a pure white field, with the word "Provo" in black lettering with gray shadows on a rainbow bar running diagonally towards the center. The rainbow represented the "eclectic and diverse nature" of Provo according to the city government.

In a 2004 survey of city flags in the United States by members of the North American Vexillological Association (NAVA), the Provo flag ranked 143rd out of 150 overall (or 8th worst), with a score of 2.14 out of 10 points. A follow-up survey in 2013 placed the flag in the same position, 143rd out of 150th; the flag was known to be "notoriously bad among flag enthusiasts".

The flag's design has been compared to the label on Centrum vitamin bottles, and to a work drawn in magic marker and crayons.

Mayor John Curtis began a public process to replace the flag in 2013, in response to the second NAVA survey, consulting with local vexilologists and residents for ideas. In May 2014, the flag replacement process was narrowed to two options by a three-member committee, both consisting of simple renditions of Utah Lake and nearby mountains, with one option having three stars to represent life in Provo. The designs were not well received by residents, leading Mayor Curtis to propose a public design contest to end in early June. A consensus was reached by residents to not use the color red in the new flag, as it is used by the University of Utah, a rival to Provo's Brigham Young University.

All content from Kiddle encyclopedia articles (including the article images and facts) can be freely used under Attribution-ShareAlike license, unless stated otherwise. Cite this article:
Flag of Provo, Utah Facts for Kids. Kiddle Encyclopedia.