American Fork, often referred to by locals as A.F., is a city in Utah County, Utah, United States, at the foot of Mount Timpanogos in the Wasatch Range, north of Utah Lake. It is part of the Provo–Orem Metropolitan Statistical Area. The population was 28,326 in 2015, representing a nearly 20% growth since the 2000 census. The city has grown rapidly since the 1970s. 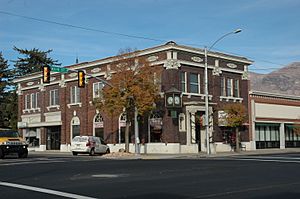 The former Bank of American Fork on Main Street. 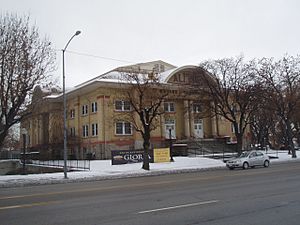 The area around Utah Lake was used as a seasonal hunting and fishing ground by the Ute Indians. American Fork was settled in 1850 by Mormon pioneers, and incorporated as Lake City in 1852. The first settlers were Arza Adams, followed by Stephen Chipman (grandfather of Stephen L. Chipman, a prominent citizen around the start of the 20th Century), Ira Eldredge, John Eldredge and their families.

The first settlers of American Fork lived in scattered conditions along the American Fork River. By the 1850s, tension between the settlers and Native Americans was increasing. In 1853, Daniel H. Wells, the head of the Nauvoo Legion (the Utah Territorial Militia at the time), instructed settlers to move into specific forts. At a meeting on July 23, 1853 at the schoolhouse in American Fork, Lorenzo Snow and Parley P. Pratt convinced the settlers to follow Wells' directions and all move together into a central fort. A fort was built of 37 acres (150,000 m2) to which the settlers located. Only parts of the wall were built to eight feet high, and none were built to the original plan of twelve feet high.

Settlers changed the name from Lake City to American Fork in 1860. It was renamed after the American Fork River which runs through the city, as well as to avoid confusion with Salt Lake City. Most residents were farmers and merchants during its early history. By the 1860s, American Fork had established a public school, making it the first community in the territory of Utah to offer public education to its citizens. In the 1870s, American Fork served as a rail access point for mining activities in American Fork Canyon. American Fork had "a literal social feud" with the town of Lehi due to the Utah Sugar Company choosing Lehi as the factory building site in 1890, instead of American Fork. There were several mercantile businesses in American Fork, such as the American Fork Co-operative Association and Chipman Mercantile. For several decades in the 1900s, raising chickens (and eggs) was an important industry in the city.

During World War II the town population expanded when the Columbia Steel plant was built. An annual summer celebration in the city is still called "Steel Days" in honor of the economic importance of the mill, which closed in November 2001. The steel mill was located approximately six miles (10 km) southeast from town, on land on the east shore of Utah Lake.

American Fork built a city hospital in 1937. A new facility was built in 1950, which was sold to Intermountain Healthcare in 1977, which in turn replaced that hospital with a new facility in 1980.

The 1992 film The Sandlot was mostly filmed on the Wasatch Front. The carnival scene was filmed in American Fork on State Street by Robinson Park.

Several scenes from the 1984 movie Footloose were also filmed in American Fork, including the opening scene inside the church, the front porch scene with Kevin Bacon and his family, and the gas station scene in which Bacon refuels his Volkswagen.

According to the United States Census Bureau, the city has a total area of 9.2 square miles (23.9 km²), all of it land. 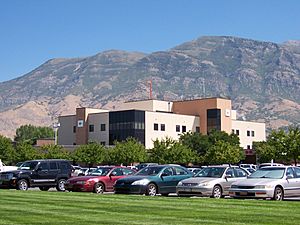 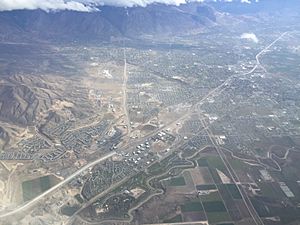 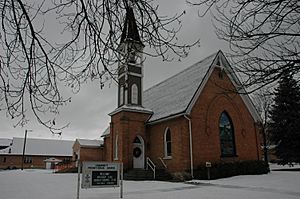 The first ward of the The Church of Jesus Christ of Latter-day Saints (LDS Church) in American Fork was organized in 1851 with Leonard E. Harrington as bishop. As of 2009 there are six stakes headquartered in the city.

While the majority of the population are members of LDS Church, there are several other faith communities in the city. The Community Presbyterian Church of American Fork was organized in 1877. In 1973 St. Peter's Catholic Parish was organized in American Fork. Additional faith groups or churches include Jehovah's Witness, Calvary Chapel and Faith Independent Baptist Church. 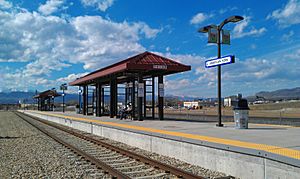 A FrontRunner Station in American Fork. FrontRunner is the commuter rail line along the Wasatch Front.

In 2012 the FrontRunner commuter rail line began operation in Utah County, with one of its stations in American Fork.

American Fork has an inter-city exchange program with Indio, California, U.S. in a way similar to an international Sister City.

All content from Kiddle encyclopedia articles (including the article images and facts) can be freely used under Attribution-ShareAlike license, unless stated otherwise. Cite this article:
American Fork, Utah Facts for Kids. Kiddle Encyclopedia.