Saratoga Springs is a city in Utah County, Utah, United States. The elevation is 4,505 feet. It is part of the Provo–Orem, Utah Metropolitan Statistical Area. The city is a relatively new development along the northwestern shores of Utah Lake. It was incorporated on December 31, 1997 and has been growing rapidly since then. The population was approx. 27,000 at the 2018 United States Census, while the 2020 estimates placed it at 40,000, making it one of the fastest-growing U.S. cities during this time period. Saratoga Springs became a city in 2001.

The natural hot springs near the source of the Jordan River inspired early European-American settlers to create a resort known as Beck's Saratoga Springs, named after the original New York resort and owner John Beck. The Beck family opened their resort in 1884 and used it as their residence. With several lodge buildings and amusement park facilities, the resort became a popular location for tourists and visitors. The original buildings were taken down. The resort area has now been redeveloped privately, containing an outdoor pool, clubhouse, bowery, and kitchen facility for groups and parties.

In the early 1990s, landowners began to investigate the possibilities of developing the land around the hot springs and in the foothill locations of the nearby Lake Mountains range. The Utah County land development ordinances were not sufficiently urban in nature, so several landowners sought incorporation as a town. Subsequently, Saratoga Springs incorporated in December 1997. Several hundred acres have since been annexed into the City limits and the City now occupies a somewhat narrow strip running north and south between Utah Lake and the Jordan River on the East and the foothills to the west. The City contains over twenty-one square miles and runs from Pelican Point on the west side of Utah Lake over eleven miles north to the Camp Williams US Army facility in the foothills between Utah and Salt Lake Counties.

On April 2, 2017, Thomas S. Monson, then president of The Church of Jesus Christ of Latter-day Saints, announced that an LDS temple would be built somewhere in Saratoga Springs.

Saratoga Springs has a manager-by-ordinance form of government. A professional manager is appointed by the City Council to oversee the daily operations of the city. As of 2014, the mayor of Saratoga Springs is Jim Miller. 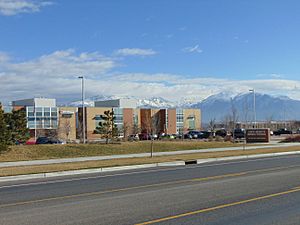 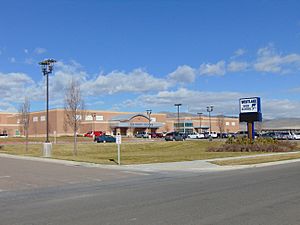 Saratoga Springs is part of the Alpine School District, which covers all of Utah County north of Orem. Due to rapid population growth, Saratoga Springs had to build several elementary schools, followed by its junior high and high schools.

In addition, a therapeutic girls' school, the New Haven School, opened in 1996.

There were 271 households, out of which 57.6% had children under the age of 18 living with them, 84.1% were married couples living together, 4.4% had a female householder with no husband present, and 8.1% were non-families. 6.3% of all households were made up of individuals, and 1.8% had someone living alone who was 65 years of age or older. The average household size was 3.70 and the average family size was 3.88.

Saratoga Springs is one of the few American cities in the 21st century to have started a municipal library with a majority of donations from volunteers. In 2010, the city council authorized $10,000 in seed money to fund the start of a city library. In 2013 the library had grown so popular that the city council recognized the need for a full-time library and authorized it. As of December 2013, the library collection contains over 18,000 titles and 6000 library card holders. The library also provides additional programs for residents including science nights, story times, Wiggle Worms, a literacy center, and test proctoring. On January 1, 2014, the city library began operating under new full-time hours.

All content from Kiddle encyclopedia articles (including the article images and facts) can be freely used under Attribution-ShareAlike license, unless stated otherwise. Cite this article:
Saratoga Springs, Utah Facts for Kids. Kiddle Encyclopedia.