Pleasant Grove, originally named Battle Creek, is a city in Utah County, Utah, United States known as "Utah's City of Trees". It is part of the Provo–Orem Metropolitan Statistical Area. The population was 37,726 at the 2020 Census. 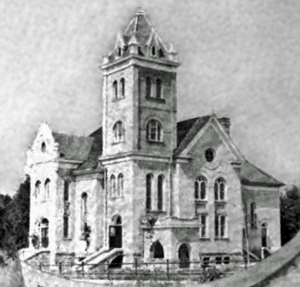 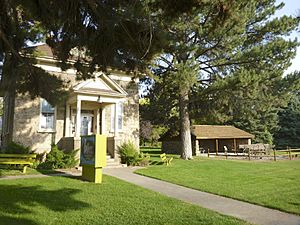 On July 19, 1850, William H. Adams, John Mercer and Philo T. Farnsworth, Mormon pioneers sent by Brigham Young, arrived at the area now known as Pleasant Grove and staked out farms in what is now the southwest corner of the city. A small community was established September 13, 1850, consisting of George S. Clark and his wife, Susannah Dalley Clark, Richard and Ann Elizabeth Sheffer Clark, John Greenleaf Holman and Nancy Clark Holman, Lewis Harvey and his wife Lucinda Clark Harvey, Johnathan Harvey and Sarah Herbert Harvey, Charles Price and wife and child, Widow Harriet Marler and children, John Wilson, Ezekiel Holman, and possibly one or two others, relatives of those mentioned. Pleasant Grove was officially incorporated as a town January 18, 1855, by which time the settlement had grown to 623 people.

The original name of the city was Battle Creek. It was named for a battle which took place there in 1849 between Mormon settlers and a small band of Ute Indians. The settlers later decided they needed a more uplifting name and began calling their town Pleasant Grove after a grove of cottonwood trees located between Battle Creek and Grove Creek, near the current-day intersection of Locust Avenue and Battle Creek Drive. A monument with a plaque describing this battle is located at Kiwanis Park, at the mouth of Battle Creek Canyon.

During the Walker Indian War in the 1850s, citizens built a fort with walls two or three feet thick and six feet tall that occupied an area the size of sixteen city blocks. The settlers in the area at the time built homes inside the fort. While the fort no longer stands, memorial cornerstones were erected by local historians. The northeast monument was erected near the intersection of 100 North and 300 East streets. The northwest monument was erected four blocks west of that point at 100 West Street and the southeast monument erected four blocks south at 300 South Street. The southwest monument would have been located near 300 South 100 West, the area is now occupied by a large parking lot and retail store.

This city was one of the filming locations for Universal's 1995 film Gold Diggers: The Secret of Bear Mountain. Also some filming of Stephen King's "The Stand". 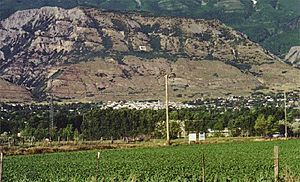 The 'G' on Little Mountain, short for "the Grove", a common nickname of Pleasant Grove High School

According to the United States Census Bureau, the city has a total area of 9.2 square miles (23.7 km2), all land. Sloping off the Mt. Timpanogos bench, Pleasant Grove is represented by a large, white "G" just above the city.

There were 6,109 households, out of which 58.0% had children under the age of 18 living with them, 77.0% were married couples living together, 8.6% had a female householder with no husband present, and 11.8% were non-families. 9.2% of all households were made up of individuals, and 3.6% had someone living alone who was 65 years of age or older. The average household size was 3.83 and the average family size was 4.11.

Pleasant Grove is home to a unique summer festival, Strawberry Days, the longest continuing community celebration in Utah to date. The city hosts the annual festival, usually during the third week of June. A rodeo held in conjunction with this festival brings competitors and spectators from throughout the West. The festival includes parades, a carnival, pageants and other activities. Although no strawberries are currently grown commercially in the city, the festival takes its name from a time when strawberries were a major economic activity in the city. The first Strawberry Days celebration was held the second week of June, 1921. It was organized by the Wasatch Club, the forerunner of the Chamber of Commerce.

In November 2008, the United States Supreme Court heard oral arguments in the case of Pleasant Grove City v. Summum, regarding whether Pleasant Grove should be allowed to have a privately donated Ten Commandments monument to be displayed on public property, must let the religion of Summum put up a monument to its "Seven Aphorisms" alongside, which it refused to do in 2003. The city lost in the Tenth Circuit. However, the Supreme Court overturned the Court of Appeals decision, citing the permanence of monuments as opposed to forms of constitutionally-protected free speech as well as the fact that governments take ownership of monuments on their properties and thus must "take some care in accepting donated monuments." 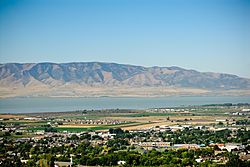 All content from Kiddle encyclopedia articles (including the article images and facts) can be freely used under Attribution-ShareAlike license, unless stated otherwise. Cite this article:
Pleasant Grove, Utah Facts for Kids. Kiddle Encyclopedia.