Eagle Mountain is a city in Utah County, Utah. It is part of the Provo–Orem metropolitan area. The city is located to the west as well as north of the Lake Mountains, which are west of Utah Lake. It was incorporated December 3, 1996 and has been rapidly growing ever since. The population was 43,623 at the 2020 census. Although Eagle Mountain was a town in 2000, it has since been classified as a fourth-class city by state law. In its short history, the city has quickly become known for its rapid growth.

Eagle Mountain is located at the western and northern bases of the Lake Mountains in the flat Cedar Valley northeast of the city of Cedar Fort. According to the United States Census Bureau, the city has a total area of 41.7 square miles (108.0 km2).

SR-73 and Eagle Mountain Boulevard provide access to the city from Utah Valley and Salt Lake Valley, although the city center sits at least 15 miles (24 km) from the two valleys' main transportation corridor along Interstate 15. The Utah Department of Transportation is in the process of building a western freeway for the Salt Lake Valley (the Mountain View Corridor), which will connect to SR-73 only a few miles from the city.

The area is home to a number of natural landmarks, including a site along the original Pony Express trail and 1,800-year-old rock art petroglyphs carved by ancient Fremont Indians.

In 2011 Eagle Mountain extended further west with the annexation of the White Hills neighborhood, which had about 400 residents, as well as area that is part of the Pole Canyon development plan. The land outside of white hills was Almost 2,900 acres. 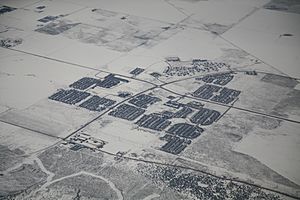 Eagle Mountain from the air, winter 2016

There were 5,111 households, of which 72.9% had children under the age of 18 living with them, 84.7% were married couples living together, 5.6% had a female householder with no husband present, and 7.2% were non-families. 5.0% of all households were made up of individuals, and 0.3% had someone living alone who was 65 years of age or older. The average household size was 4.19 and the average family size was 4.34.

In 2015, Eagle Mountain was the 10th most conservative city in the United States as judged by political donations.

The six major roads running into Eagle Mountain are Utah State Route 73, which runs through the northern part of the city and along its western edge into Cedar Fort, Eagle Mountain Blvd which goes straight to city center, Ranches Pkwy which provides access to the Ranches from Utah State Route 73, Aviator Ave which runs from Eagle Mountain Blvd to Pony Express Pkwy by the new Cedar Valley High School, Pole Canyon Blvd which provides access from White Hills to City Center, and Pony Express Pkwy, which was extended east to Redwood road in Saratoga Springs in 2010. This was done to facilitate access with the rest of Utah County via connection with Pioneer Crossing, the east-west connector from Redwood Road to I-15.

SR-73, Eagle Mountain Boulevard, and Ranches Parkway provide regional access to the city from Salt Lake Valley, and Pioneer Crossing, Redwood Road, and Pony Express Parkway provide access to the city from Utah County although the city center sits at least 15 miles (24 km) from the two valleys' main transportation corridor along Interstate 15. The Utah Department of Transportation is in the process of building a western freeway for the Salt Lake Valley (the Mountain View Corridor), which will connect to SR-73 only a few miles from the city.

In 2008, the Utah Transit Authority (UTA) began service on an express bus route (#806) into Eagle Mountain. It is the first UTA bus to service the city.

The city lists 4 regional parks and about 35 local parks. In 2009, Eagle Mountain opened the Mountain Ranch Bike Park. This park is the first of its kind on the Wasatch Front. It features a jump line, two slope style tracks, a single track network, and a skills area with a pump track and wood features.

2005. "A Ride from the Past on a Road to the Future: A History of Eagle Mountain". Copyright 2005; Published by Eagle Mountain City, Utah with 106 pages. First Edition 2005. Written by Marci Purnell; Edited by Leah Woodard; With Contributions by Mayors Hooge, Bond, Bateman, and Bailey.

All content from Kiddle encyclopedia articles (including the article images and facts) can be freely used under Attribution-ShareAlike license, unless stated otherwise. Cite this article:
Eagle Mountain, Utah Facts for Kids. Kiddle Encyclopedia.