Salt Lake County is a county located in the U.S. state of Utah. As of the 2010 census, the population was 1,029,655, making it the most populous county in Utah. Its county seat and largest city is Salt Lake City, the state capital. The county was created in 1850.

Salt Lake County occupies the Salt Lake Valley, as well as parts of the surrounding mountains, the Oquirrh Mountains to the west and the Wasatch Range to the east (essentially the entire watershed of the Jordan River north of the Traverse Mountains). In addition, the northwestern section of the county includes part of the Great Salt Lake. The county is noted for its ski resorts; Salt Lake City won the bid to host the 2002 Winter Olympics.

This area was occupied for thousands of years by cultures of indigenous peoples.

The area that was to become Salt Lake County was settled by European Americans in 1847 when Mormon pioneers of The Church of Jesus Christ of Latter-day Saints (LDS Church) fled religious persecution in the East. They arrived in the Salt Lake Valley of the Utah Territory after traveling what settlers later called Emigration Canyon. Brigham Young, their leader, declared "This is the place" after seeing the valley. Compared to eastern regions, it seemed arid and unpromising to some of the migrants. Settlers used extensive irrigation to develop agriculture and the flourishing, self-sufficient city, Great Salt Lake City. Thousands of Mormons joined them in the next several decades. The county was officially organized on January 31, 1850, with slightly more than 11,000 residents recorded.

Mormon settlements were scattered across the valley and beyond. They relocated the territorial capital to Great Salt Lake City in 1857, when the name was subsequently shortened to Salt Lake City. In 1858, when the Utah Territory was declared in rebellion after governor Brigham Young refused to step down for The Church of Jesus Christ of Latter-day Saints' polygamous practices, the federal government sent troops to install a new governor and keep watch over the area. They abandoned the valley and the troops set up Camp Floyd to the south in Utah County. In 1862, Fort Douglas was established on the eastern bench, near the current site of the University of Utah, as the federal government wanted to ensure loyalty of the territory during the American Civil War.

Patrick Edward Connor, the leader of the garrison at Fort Douglas, was openly anti-Mormon. He sent out parties to scout for mineral resources in the nearby mountains, hoping to encourage non-Mormons to settle in the territory. During the late 19th century, mines were established in the Wasatch mountains, most notably around Alta (and nearby Park City in Summit County). Exploiting the mineral wealth was difficult until the Utah Central Railroad was constructed and reached this area in 1870.

In the Oquirrh Mountains, the Bingham Canyon Mine, which contains vast deposits of copper and silver, was developed as the most productive of the county's mines. The mine, located in the southwest portion of the county, attracted thousands of miners and other settlers to the narrow canyon. At its peak, the city of Bingham Canyon contained 20,000 residents, all crowded along the steep walls of the canyon, and natural disasters were a frequent occurrence. By the early 20th century, most of the mines in the county had closed. However, the Bingham Canyon Mine kept on expanding. In the early 21st century, it is among the largest open-pit mines in the world.

After the railroad came to the county, the population began to expand more rapidly and non-Mormons began to settle in Salt Lake City. During the early 20th century, heavy industry came to the valley as well, diversifying its economy. Local and interurban trolley systems were built covering the more urban northeastern quarter of the valley. The city dismantled the trolley system by 1945, favoring the use of individual cars. Throughout the late 19th and early 20th centuries, the east side of the valley began to be more densely settled.

In 1942, Camp Kearns, a large military installation developed for World War II, was located in what is now Kearns and Taylorsville on the western side of the valley. After the camp was closed in 1946, the land was sold off for private development. Rapid postwar residential settlement of the area began. The federal government established other major defensive installations along the Wasatch Front and in the Great Salt Lake Desert during World War II, which stimulated the economy and brought more military and related personnel to the area, establishing Utah as a major military center that benefited from federal investment. In the nationwide suburban boom of the late 1940s, 1950s, and early 1960s, such cities as South Salt Lake, Murray, Midvale, and much of the east side of the valley grew rapidly.

The airport was upgraded to international status in the 1960s, being named as Salt Lake City International Airport. In common with other industrialized cities, Salt Lake City faced inner-city decay in the 1960s, when residents moved to newer housing in the suburbs based on the subsidized highways. Such cities as Sandy, West Jordan, and what would become West Valley City grew at boomtown rates in the 1970s and 1980s. Huge residential tracts were developed through the center of the valley, and within ten years, the entire area had been converted from farmland into sprawling bedroom communities to Salt Lake City. West Valley City was created from the merger of the three unincorporated cities of Granger, Hunter, and Redwood (including Chesterfield) in 1980.

But not every area of the county saw growth. The former mining towns related to Bingham Canyon were torn down in the 1960s and 1970s to make way for expansion of the open-pit mine. The city of Bingham Canyon was completely torn down and swallowed up in the mine by 1972, and the dismantling of Lark in 1980 completed the process. The only remaining mining town in the county is Copperton, located southwest of West Jordan, with approximately 800 residents. Magna has workers who continue to be associated with the mine's smelting operations in Garfield and at Arthur Mill.

In the 1990s, the county's areas of rapid growth shifted further south and west. Old farmland and pastureland were redeveloped as suburbs. The cities of West Jordan, South Jordan, Riverton, Herriman, and Draper are some of the fastest-growing cities in the state. During the 1990s, Salt Lake City gained population for the first time in 40 years. Salt Lake City's selection as the host of the 2002 Winter Olympics spurred a construction boom in the city that continued well after the end of the Olympics; slowing in the 2008 recession. As the county's population has surpassed 1 million, one of the main issues in the county is urbanization. Only a few small rural areas remain in the far west of the valley. Other issues facing the county today include congested transportation and related air pollution.

The western portion of the county descends toward the valley of the lake, but perhaps the most dominating physical feature in Salt Lake County are the Wasatch Mountains in the eastern portion of the county, famous for both summer and winter activities. The mountains are administered as part of the Wasatch-Cache National Forest. The snow in the region is often coined the "Greatest Snow on Earth" for its soft, powdery texture, and led to Salt Lake City winning the bid for the 2002 Winter Olympics. Salt Lake County has four ski resorts: Snowbird and Alta in Little Cottonwood Canyon and Solitude and Brighton in Big Cottonwood Canyon. Hiking and camping are especially popular summer activities. The Oquirrh Mountains border the western part of the county. These two mountain ranges, together with the much smaller Traverse Mountains to the south of the valley, delimit Salt Lake Valley, which is also flanked on the northwest by the Great Salt Lake, and the north by the Salt Lake Anticline (most notably Ensign Peak). 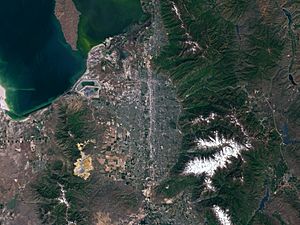 Salt Lake County and surrounding area as seen from above.

On the north and east benches, houses have been built halfway up the mountain, to the boundary of the national forest, assuming greater risk from wildfires. New communities are also being constructed on the southern and western slopes. Rapid residential construction continues in the west-central, southwest, and southern portions of the valley. In the far west, southwest, and northwest, rural areas still exist, but rapid growth threatens what remains of the natural environment in the valley. The County government operates several large parks in the valley (including some with incorporated cities), including Big Cottonwood Park, Crestwood Park, and an Equestrian Center.

The Salt Lake Valley receives approximately 15 inches (380 mm) of precipitation annually, usually with more on the east side and less on the west side, as most storms come from the Pacific Ocean and the west side is in the rain shadow of the Oquirrh Mountains. Up to 500 mm is received on the east benches. Most of this precipitation is received in spring. The summer is dry, with the majority of precipitation arriving from the monsoon that rises from the south. Short, localized, and often dry thunderstorms are usually associated with the monsoon. However, some can be very intense. These storms can cause contrasting emergencies of flash floods and wildfires (due to dry lightning and powerful winds). Precipitation is heaviest in late fall/early winter and in spring, while early summer is the driest season.

The valley receives 55 inches (140 cm) or more of snow in a year, with up to 100 inches (250 cm) received on the benches. Most of the snow falls from mid-November through March. The mountains receive up to 500 inches (1,270 cm) of light, dry snow and up to 55 inches (1400 mm) of precipitation annually. The dry snow is often considered good for skiing, contributing to the four ski resorts in the county. Snow usually falls from October through May. The heavy snow totals across the county can be attributed to the lake-effect, where precipitation is intensified by the warm waters of the Great Salt Lake, which never entirely freezes due to the lake's high salinity. The lake-effect can affect any area of the county. The dry snow is attributed to the low humidity of the region.

During winter, temperature inversions are a common problem, causing air pollution in the valley. The inversion will trap pollutants, moisture, and cold temperatures in the valley while the surrounding mountains enjoy warm temperatures and clear skies. This can cause some melting snow in the mountains and unhealthy air quality and low visibility in the valley. This weather event lasts from a few days to up to a month in extreme cases, and is caused when a very strong high pressure positions over the Great Basin.

The Census' 2005 American Community Survey indicated that 11.4% of Salt Lake County's population living in households (as opposed to group arrangements such as college dormitories) spoke Spanish at home.

Recent religious data suggests that as of 2011, 51.4% of the county identifies as LDS. 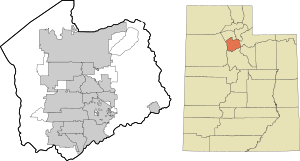 The county has created "townships" and "community councils" in unincorporated areas, largely for planning purposes only. As of 2010, all of the townships are also census-designated places (CDPs), but the boundaries set by the Census Bureau and the county do not always coincide.

All content from Kiddle encyclopedia articles (including the article images and facts) can be freely used under Attribution-ShareAlike license, unless stated otherwise. Cite this article:
Salt Lake County, Utah Facts for Kids. Kiddle Encyclopedia.