Kids Encyclopedia Facts
This page is about the river parkway and trail in northern Utah. For the river trail in Antrim County, Michigan, see Jordan River Pathway.

The Jordan River Parkway is an approximately 40-mile (64 km) urban park that runs along the Jordan River within the U.S. state of Utah. The parkway follows along the river from Utah Lake in Utah County, through Salt Lake County and onto the Great Salt Lake in Davis County. The majority of a mixed-use trail has been completed with a shared-use path for cyclists, skaters, and joggers. A separate equestrian path runs on the southern portion of the trail. Many trail-heads, city and county parks and golf courses are also located along the parkway.

The parkway was conceived in 1971 primarily as a flood-control measure, but restoration of the floodplain, cleanup of pollution, adding trails and other recreational opportunities were also to be included. Requests for a river master plan included two reservoirs, the Lampton in South Jordan and the Riverton in Riverton and Draper, but plans for the reservoirs were dropped by the State Legislature in 1980. The Utah Legislature approved a bill in 1973 that created the Provo-Jordan River Parkway Authority. The Parkway Authority received $3 million in funds and was charged with constructing the parkway. The Parkway Authority moved slowly through the 1970s, primarily buying land and cleaning up the water, plus other cities were also buying land on the river.

By 1986, $18 million had been spent on the parkway, mostly from state funds. Land had been purchased and trails constructed for the Utah County portion. Much of the work in Salt Lake County had been done from Murray north with the addition of Murray Golf Course, several smaller parks and about 4 miles (6.4 km) of canoe runs and trails. By 2000, two U.S. Environmental Protection Agency Superfund sites were underway to being cleaned up. The Midvale Slag site sat adjacent to 6,800 feet (2,100 m) of the Jordan River. The site was contaminated from old smelter operations. The other Superfund site, Midvale Sharon Steel, sat adjacent to 4,000 feet (1,200 m) of the Jordan River.

A part of the Utah State Park System, it is operated by the State of Utah and is open from April through November. There are four tracks, with tabletops and banked turns; 2 motorcross tracks, and 2 for OHVs and all-terrain vehicles. State-required OHV programs are available at this location. Also available is a model port, with a runway and open space for model radio-controlled airplanes. Except to walk or bicycle on the gravel path, a per-person fee is required for the use of the park. A trail-head is proposed on the north end of the park where the gravel trail ends.

Salt Lake City maintains 3 parks and some parts of the trails along the river: 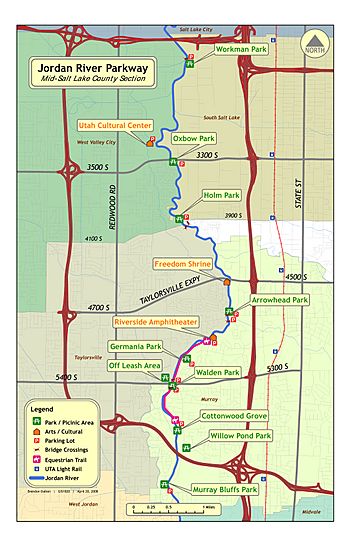 The City of South Salt Lake, Utah operates 1 park on the river:

Salt Lake County operates 4 parks and the trails which connect them in the vicinity of West Valley City, Utah:

Murray maintains 5 parks along the river. Most of the Murray section has an equestrian trail alongside the paved trail:

Midvale completed a portion of trail in 2001 connecting with West Jordan at 7800 South heading southeast to 700 West at approximately 8600 South:

Good portions are completed either paved or graveled. Utah County maintains 5 areas/parks as well as the 9 miles (14 km) of trail between the northern county line and Utah Lake:

All content from Kiddle encyclopedia articles (including the article images and facts) can be freely used under Attribution-ShareAlike license, unless stated otherwise. Cite this article:
Jordan River Parkway Facts for Kids. Kiddle Encyclopedia.