West Jordan is a city in Salt Lake County, Utah, United States. It is a suburb of Salt Lake City and has a mixed economy. According to the 2020 Census, the city had a population of 116,961, placing it as the third most populous in the state. The city occupies the southwest end of the Salt Lake Valley at an elevation of 4,330 feet (1,320 m). Named after the nearby Jordan River, the limits of the city begin on the river's western bank and end in the eastern foothills of the Oquirrh Mountains, where Kennecott Copper Mine, the world's largest man-made excavation, is located.

Settled in the mid-19th century, the city has developed into its own regional center. As of 2012[update], the city has four major retail centers; with Jordan Landing being one of the largest mixed-use planned developments in the Intermountain West. Companies headquartered in West Jordan include Mountain America Credit Union, Lynco Sales & Service, SME Steel, and Cyprus Credit Union. The city has one major hospital, Jordan Valley Medical Center, and a campus of Salt Lake Community College.

City landmarks include Gardner Village, established in 1850, and South Valley Regional Airport, formerly known as "Salt Lake Airport #2". The airport serves general aviation operations as well as a base for the 211th Aviation Regiment of the Utah Army National Guard flying Apache and Black Hawk helicopters. 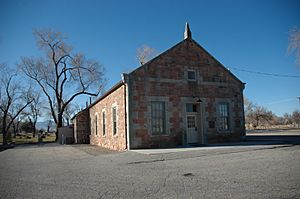 The historic West Jordan Ward Meeting House of the LDS Church. It is now the Museum of the Daughters of Utah Pioneers.

West Jordan received its name from Mormon settlers who entered the Salt Lake Valley in 1847 under the leadership of their prophet, Brigham Young. These first European-Americans thought of the area to be their Zion, or Holy Land, and thus named the river flowing west of their first settlement, Salt Lake City, the Western Jordan, a reference to the River Jordan in Israel. The name was later simplified to "Jordan River". Like its Middle Eastern namesake, the Jordan River flows from a fresh water lake (Utah Lake) to an inland salt sea (Great Salt Lake). West Jordan was founded around 1849 on the western banks of the Jordan River.

One of the first sawmills in the area was built in 1850 in the city by Archibald Gardner. Gardner was a devout Mormon whose legacy can still be seen in modern West Jordan. His collection of mills and houses, now historic, have been renovated into a specialty shopping district known as Gardner Village.

Early West Jordan relied primarily on agriculture, mills, and mining activity to form the base of its economy. The first leather tannery west of the Mississippi River was constructed in the city in 1851.

Today, West Jordan is one of the fastest growing cities in Utah. Growth has been phenomenal, beginning in the 1970s and continuing unabated since. The population grew from 4,221 in 1970 to 27,327 in 1980, 42,892 in 1990, and 68,336 in 2000, reaching 103,712 according to the 2010 Census. Sears chose the city as its first Sears Grand location, a new store concept, which opened its doors in 2003 at the Jordan Landing shopping center. Transportation issues along with school overcrowding are the city's top concerns as it attempts to deal with rapid population growth.

Current major construction projects include the completion of Jordan Landing, a new main campus for the Salt Lake Community College, the expansion of Jordan Valley Hospital, and Midvale's current transit-oriented development on the east border in the Jordan River bed. Future plans for the city include the Mountain View Corridor highway and the "Mid-Jordan" TRAX light rail line.

Old downtown West Jordan is in the process of being reconstructed as a transit-oriented development called "Briarwood." The plans called for an expanded Main Park, a history museum, an indoor recreation center, a senior center, and a large courthouse to serve the Utah State Third District, most of which are now complete. The second phase calls for the demolition of a dilapidated commercial area, to be replaced by six-story buildings housing a performing arts center, a large library, a hotel, an education center, a conference center, retail and office space, a trail linking to Gardner Village and the Jordan River trail, and a cultural pavilion to house the planned light rail station. As of 2014, the library and TRAX light-rail have been completed and opened.

Looking down and westward at the city and the Oquirrh Mountains

According to the United States Census Bureau, the city has a total area of 30.9 square miles (80.0 km2), all of it land.

The city lies approximately 18 miles (29 km) southwest of downtown Salt Lake City. The city is bordered on the north by Taylorsville and Kearns, on the south by South Jordan, on the east by Sandy, Murray and Midvale, on the west by Copperton, and on the extreme northwestern corner by West Valley City. 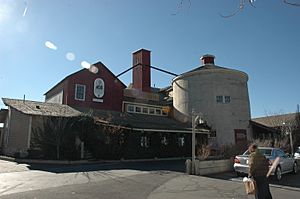 The historic Gardner Mill is now part of the Gardner Village shopping center.

Interstate 15, a twelve-lane freeway, is located east of the city limits, providing access from the north and south, while Interstate 215, an eight-lane beltway, is located northeast of the city. Bangerter Highway (State Route 154), a six-lane expressway, traverses the center of the city, just east of South Valley Regional Airport and the Jordan Landing shopping center. Due to severe traffic congestion plaguing the rapidly growing city, a ten-lane freeway in the Mountain View Corridor (SR-85) is planned to have three exits in the city (7800 S, 9000 S, and Old Bingham Hwy.) and run north-south at about 5800 West in the south and bend west to 6400 West in the north. The first phase of the project was completed December 15, 2012.

New Bingham Highway, mostly a four-lane road, begins as 7720 South at State Street (U.S. Route 89) in Midvale, curves into 7800 South as it enters the city, and finally heads southwest to end at Copperton. Redwood Road (State Route 68), a six-lane road, runs through the eastern portion of the city. In the far western extremes of the city, State Route 111, a two-lane road, runs through the developing rural area along the foothills. Development has recently begun to expand beyond SR-111.

In the middle of West Jordan is located the South Valley Regional Airport. Its FAA designation is U-42. It was formally known as Airport #2, because it is owned by Salt Lake City and is a subsidiary of Salt Lake City International Airport. Because of its location within the city, a large shopping center was built next to the airport, which resulted in the shopping center being named Jordan Landing.

West Jordan is served by the Utah Transit Authority (UTA) bus system, which runs every half-hour during peak hours. All of the routes running into the city connect to nearby TRAX stations in Midvale and Sandy or to downtown Salt Lake City. Service in the city was increased during the August 2007 redesign of the bus system. A TRAX light rail line also serves the area. This line begins at the Fashion Place West station in Murray and run southwest through West Jordan, with 6 stops in the city, before turning south and terminating at the Daybreak Community in South Jordan. The route was opened on August 7, 2011.

Transportation has been a major issue in city politics. The city's population has expanded rapidly from about 4,000 in 1970 to over 100,000 in 2010, outstripping the capacity of roadways and infrastructure. At city council meetings it has been common for residents, particularly those on the western edge of the city, to complain about having one-hour commutes to downtown Salt Lake City, a distance of 26 miles (42 km). Elected officials have blamed this situation on the fact that the city is the most populous in the state that is not directly served by a freeway. In addition to significant road widening projects throughout the city, the Mountain View Corridor freeway is currently under construction to service the western portion of the city.

West Jordan has a sister city, as designated by Sister Cities International: 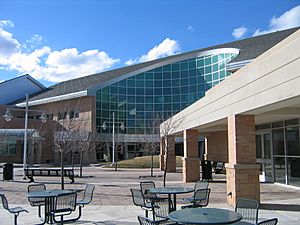 Most of West Jordan lies in the Jordan School District; however, due to a pair of annexations, two small sections along the northern border lie within the Granite School District. The city has 16 elementary schools (including one in the Granite District), four middle schools, and two high schools (West Jordan and Copper Hills). It is also the location of campuses of Salt Lake Community College and Broadview University.

All content from Kiddle encyclopedia articles (including the article images and facts) can be freely used under Attribution-ShareAlike license, unless stated otherwise. Cite this article:
West Jordan, Utah Facts for Kids. Kiddle Encyclopedia.