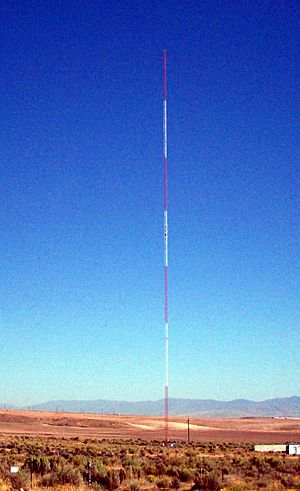 The tower for KDYL 1060 AM located near Copperton, Utah.

Copperton was established in 1926, by the Utah Copper Company as a residential area and "model city" for its employees. It emerged as a "showplace for company-subsidized family life." Construction of housing ended in the 1930s and company furnished housing ended in 1955. After that a private real estate developer managed the homes for employees.

As of the 2010 Census, Copperton has a population of 826. Copperton is the only mining town remaining for the Bingham Canyon Mine after Lark was torn down in 1980. Currently, only a handful of residents work for the mine. The town’s history is directly linked to the mine.

All content from Kiddle encyclopedia articles (including the article images and facts) can be freely used under Attribution-ShareAlike license, unless stated otherwise. Cite this article:
Copperton, Utah Facts for Kids. Kiddle Encyclopedia.