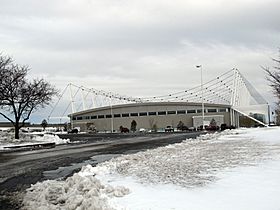 Kearns is a township and census-designated place (CDP) in Salt Lake County, Utah, United States. Named after Utah's U.S. Senator Thomas Kearns, it had a population of 35,731 at the 2010 Census. This was a 6.2 percent increase over the 2000 figure of 33,659. Kearns is home to the Utah Olympic Oval, an indoor speed skating oval built for the 2002 Winter Olympics.

Actor and entertainer Palmer Scott was raised in Kearns from 1956 to 1980.

See also: Kearns Army Airfield for information about the military use of the facility

Kearns came into existence 1 May 1942 as a World War II United States Army Air Forces training facility known as Kearns Army Air Base (also known as Kearns Center; redesignated: Camp Kearns, 1 January 1944). Construction of the base involved building airplane runways and hangars, with several taxiways and a large parking apron and a control tower. Several hundred buildings were also constructed and quickly assembled. Most base buildings, not meant for long-term use, were constructed of temporary or semi-permanent materials. Most support buildings sat on concrete foundations but were of frame construction clad in little more than plywood and tarpaper. The thousands of soldiers and airmen stationed there temporarily made the base one of the largest cities in the state. On 15 August 1946 the Air Force inactivated the base, and turned the facility over to the State of Utah. The presence of roads and other infrastructure made the area attractive to developers. Houses and business sprang up rapidly on what had just a few years earlier been farmland. Today only two buildings remain of the former Air Base. The airfield part of Kearns Army Air Base today is known as South Valley Regional Airport.

According to the United States Census Bureau, the CDP has a total area of 4.8 square miles (12.5 km²), all of it land.

This climatic region is typified by large seasonal temperature differences, with warm to hot (and often humid) summers and cold (sometimes severely cold) winters. According to the Köppen Climate Classification system, Kearns has a humid continental climate, abbreviated "Dfb" on climate maps.

There were 9,789 households out of which 54.1% had children under the age of 18 living with them, 67.3% were married couples living together, 13.1% had a female householder with no husband present, and 13.8% were non-families. 10.5% of all households were made up of individuals and 3.7% had someone living alone who was 65 years of age or older. The average household size was 3.65 and the average family size was 3.88.

All content from Kiddle encyclopedia articles (including the article images and facts) can be freely used under Attribution-ShareAlike license, unless stated otherwise. Cite this article:
Kearns, Utah Facts for Kids. Kiddle Encyclopedia.