Snowbird is an unincorporated community in Little Cottonwood Canyon in the Wasatch Range of the Rocky Mountains near Salt Lake City, Utah, United States. It is most famous for Snowbird Ski and Summer Resort, an alpine skiing and snowboarding area, which opened in December 1971. 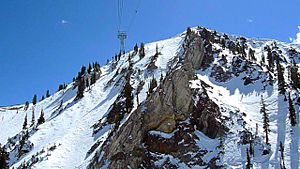 The development of Little Cottonwood Canyon and the town of Alta dates to the 19th Century. A U.S. Army soldier first prospected for silver there in 1869. Mining became a large local industry, and Little Cottonwood Canyon became one of the largest producers of silver ore in the Wasatch Mountains. Known as the Emma Mine (the origin of the name of the Big Emma ski run in Snowbird's Gad Valley), the soldier's find eventually produced more than $3.8 million in silver. At its peak, 8,000 people lived and worked in the narrow canyon, which held two smelters, 138 homes, hotels, boarding houses, stores and a railroad. The entire town was later destroyed by a series of avalanches.

The resort operates almost entirely on National Forest Service land – the resort owners only have ownership rights to a relatively small part of it.

The originator of the Snowbird resort concept was Ted Johnson, who had managed the Alta Lodge in the town of Alta at the head of Little Cottonwood Canyon for about a decade. He had explored the terrain below Alta in the Peruvian Gulch and Emma Mine/Gad Valley watersheds that later became Snowbird. Johnson met Dick Bass, a Texas oilman, in 1969, and the two of them partnered to create the Snowbird resort, which opened in 1971. In 1974, Johnson sold his interest in Snowbird to Bass. 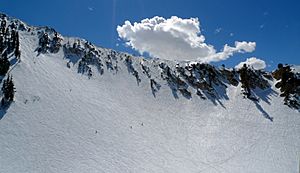 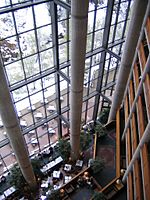 Inside the Snowbird Cliff Lodge in 2006

Snowbird shares Little Cottonwood Canyon with Alta Ski Area to the east, just up the canyon over a ridge that separates the two. Beginning winter 2002, the two resorts offer a joint day pass and a joint season ticket allowing full access all of the terrain on both mountains: 26 ski lifts and tows and a skiable area of 4,700 acres (19 km2). The collaboration coincided with the opening of a new lift in Mineral Basin, a large bowl owned by Snowbird on the back of Snowbird's Hidden Peak and Alta's Sugarloaf mountains that had been skiable within the resort since 1999. The installation of Baldy Express in 2002 allowed access to Alta from the Basin. Other access points between the two resorts exist as well. The offer is open to skiers only, as a result of Alta's skiers-only (no snowboards) policy.

Both areas receive more than 500 inches (1,270 cm) of snowfall per year, due to lake-effect enhancement from the Great Salt Lake, making them the second snowiest ski areas in the United States (after the ones in the Cascades). In contrast to the humid and wet conditions in the Cascades near the Pacific Ocean, the arid condition of the Great Basin produces very dry and powdery snow, making Snowbird and Alta top global destinations for powder-skiing aficionados. Another benefit of being East of the great salt lake is that salt from the lake provides the condensation nuclei that creates ice pellet snow that doesn't pack like normal snowflakes. Loose powder for days after a snowfall is common. On very windy days the salt is lifted thousands of feet and has been known to coat the windshield of airplanes flying into Salt Lake City.

Snowbird usually closes on Memorial Day in late May while the occasional ski year can last as long as the Fourth of July on the upper part of the mountain (accessed by the aerial tram), perennially offering the longest ski season in Utah. Snowbird has a skiable area of 2,500 acres (10.1 km2) with a vertical drop of 3,240 feet (988 m) from the summit of Hidden Peak, which has an elevation of above 11,000 feet (3,353 m). Hidden Peak is serviced by an aerial tram from the base area.

Snowbird currently has 10 chairlifts (6 high-speed quads, 4 doubles), a surface lift, an aerial tram, and a 600-foot (180 m) tunnel enclosing a one-way conveyor lift connecting Peruvian Gulch to Mineral Basin allowing easier access for beginners and intermediates to new terrain. The tunnel, the first of its kind in North America, also allows for skier transport when winds require the closing of the aerial tram. New in the 2013–14 season is the Gad 2 High Speed Quad, replacing the double that followed the same lift line.

The Little Cottonwood Canyon resort has a total of four lodges: the Iron Blosam, the Inn, the Lodge at Snowbird, and the Cliff Lodge. The resort also has gift shops, restaurants, arcades, hiking trails, pools and a rooftop spa. A new mountaintop lodge was built at Hidden Peak in the 2015 summer. 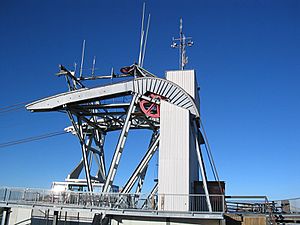 All content from Kiddle encyclopedia articles (including the article images and facts) can be freely used under Attribution-ShareAlike license, unless stated otherwise. Cite this article:
Snowbird, Utah Facts for Kids. Kiddle Encyclopedia.