Alta is a town in eastern Salt Lake County, Utah, United States. It is part of the Salt Lake City, Utah Metropolitan Statistical Area. The population was 383 at the 2010 census, a slight increase from the 2000 figure of 370.

Alta is centered in the Alta Ski Area, a ski resort that has 500,000 annual visitors. It is known for its powder skiing and its decision to not allow snowboarding. 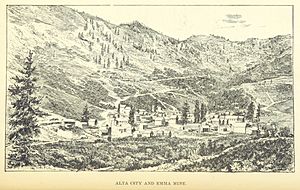 Alta has been important to the development of skiing in Utah. Alta was founded about 1865 to house miners from the Emma mine, the Flagstaff mine, and other silver mines in Little Cottonwood Canyon. Sensationally rich silver ore in the Emma mine enabled its owners to sell the mine at an inflated price to British investors in 1871. The subsequent exhaustion of the Emma ore body led to the recall of the American ambassador to Great Britain, who was a director of the company, and Congressional hearings in Washington.

An 1878 fire and an 1885 avalanche destroyed most of the original mining town, though some mining activity persisted into the 20th century. By the 1930s, only one resident, George Watson, remained in the town. Facing back taxes on mining claims he owned, Watson donated much of the land in Alta to the U.S. Forest Service. Watson stipulated that the Forest Service use the land to construct a ski area. In 1935, Norwegian skiing legend Alf Engen was hired to help develop the area, and Alta opened its first ski lift in 1938.

Today, Alta is a small town, centered around the Alta Ski Area.

As of the 2010 United States Census, there were 386 people in 156 households in the town. The racial makeup of the town was 93 percent white and 4 percent Hispanic or Latino.

Alta experiences a high altitude humid continental climate (Köppen Dfb), which borders on a subalpine climate (Dfc), due to its high elevation. Due to its proximity to the Great Salt Lake, the town receives very heavy snows, averaging over 507 inches (12.9 m) per year. During the very wet season of 1982/1983, Alta received as much as 900 inches (23 m) of snow, leading to record flooding of Wasatch streams as the snow melted during May and June that year. Alta’s total precipitation of 108.54 inches (2,756.9 mm) during 1983 is a record for a calendar year in any state of the Mountain West; strangely Villanueva only 675 miles (1,086 km) away recorded only 0.91 inches (23.1 mm), which is a record low for New Mexico, in that same year.

All content from Kiddle encyclopedia articles (including the article images and facts) can be freely used under Attribution-ShareAlike license, unless stated otherwise. Cite this article:
Alta, Utah Facts for Kids. Kiddle Encyclopedia.