The Utah State Prison is located in Draper, near Point of the Mountain, alongside Interstate 15.

American Indian groups living in Utah include the Ute, Paiute, Goshute, Shoshone, and Navajo. A group of Shoshone people near Hoytsville, Utah. The Utes, Paiutes, Goshutes, and Shoshone people speak similar languages from a family known as the Numic Language Family.

In the fall of 1849, Ebenezer Brown brought cattle to graze along the mountain stream of South Willow Creek. The next spring, he brought his family and sold his cattle to immigrants heading to the gold fields of California along what became the Mormon Road. More settlers came in the next few years to the new settlement first known as Sivogah, meaning Willows, the Indian name for the area, then later as South Willow Creek. At the end of 1852, 20 families lived along South Willow Creek. In 1854, the first post office was established with the name Draperville for William Draper III, the first presiding elder of the town's Mormon congregation. The name of the town in later years was shortened to Draper.

Hostilities with the Native Americans began in 1854, and a fort was established were the local settlers lived, during the winters of 1855 and 1856. The fort was never completed, as the feared hostilities did not materialize, and its former location is now the site of the Draper Historical Park. 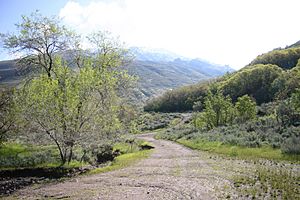 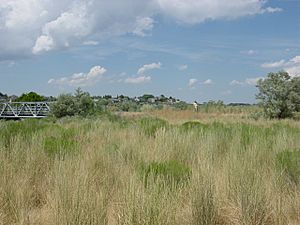 Draper lies roughly midway between Salt Lake City and Provo. Draper is bordered by Riverton and Bluffdale to the west, South Jordan to the northwest, Sandy to the north, Alpine to the southeast, Highland to the south, and Lehi to the southwest.

The winds on Traverse Ridge make it a popular area for hang gliding and paragliding. In 2004, Draper citizens voted for a tax increase that would pay for the purchase of key pieces of property in the Corner Canyon area. The aim of this measure was to protect and preserve the Corner Canyon area for the future enjoyment of citizens of the city and the Salt Lake Valley area. In the fall of 2005, 1,021 acres (4.13 km2) of property were identified and purchased for the development of Corner Canyon Regional Park, which will consist of parks, trails, and other recreation areas.

Draper's climate is roughly identical to that of other Salt Lake City suburbs. However, due to being further away from the Great Salt Lake, varied elevation, and from the downtown urban heat island effect, Draper experiences a slightly drier winter, and more extremes in temperatures.

The average temperatures in winter and summer respectively are 30°F to 50°F, and 80°F to 100°F. Springs are usually mild and wet, while fall can sometimes become an Indian summer with drier weather. Monsoonal moisture from the south usually brings afternoon thunderstorms in July and August. Draper falls on the border of the humid continental/subtropical climatic zones, and is technically a cool/warm semi-arid desert environment, but with summer monsoonal moisture. Snow usually falls quite regularly from November through March.

All content from Kiddle encyclopedia articles (including the article images and facts) can be freely used under Attribution-ShareAlike license, unless stated otherwise. Cite this article:
Draper, Utah Facts for Kids. Kiddle Encyclopedia.