Riverton shares city borders with South Jordan to the north, Draper to the east, Bluffdale to the south, and Herriman to the west. According to the United States Census Bureau, the city has a total area of 12.6 square miles (32.6 km²). The city is located in the Southwestern corner of the Salt Lake Valley about twenty miles (32 km) south and slightly west of Salt Lake City. Riverton City receives an average of 15.76 inches (400 mm) in precipitation each year. Snow can be seen in the winter, while during the summer temperatures occasionally break 100 °F (38 °C). Riverton has grown rapidly in the last few years, transforming it from a rural farming town into a suburban city. Businesses, housing, and roads have replaced many of the farms and cattle ranges.

Located in the southern end of Salt Lake Valley, the first people of European descent to live in the area that is now Riverton settled in the mid-1850s. These early settlers scattered widely along the river bottom in crude dugout homes. Although the early accounts disagree, Archibald Gardner may have been the first to live on Riverton land. The town was originally referred to as “Gardnerville” prior to changing its name to Riverton. Riverton's initial growth was slow because of the lack of water for irrigation. When more water became available, the town began to grow. Eventually three canals were built to extend water from the nearby Jordan River to the benchland areas, providing irrigation for agricultural uses to the larger area.

By the beginning of World War I in 1914, with its additional irrigation water and influx of people, Riverton prospered as an agricultural community. Its thriving business district was also evident at this time.

The Page-Pixon store was built around the start of the 20th century, west of Redwood Road at 12760 South. The large department store sold everything from building materials, coal and dry goods to groceries, grain and housewares. This building was set back off the road and had a tie rail in front of it for tying up horses.

The Jordan Valley Bank was started in 1905 as a community bank. This bank was first housed in the Page-Hansen Store then the Commercial Building. In 1920 it moved across the street, to the south. Other businesses coming to Riverton in the ten-year period before and after the First World War included Bill's Meat Market, Gilbert Lloyd's Blacksmith Shop, Riverton Motors, the Riverton, Utah Canning Factory, the Riverton Alfalfa Mill, Utah Poultry Company and numerous others ranging from theaters to mercantile stores.

Farming was also a major Riverton business. Just before the turn of the century, the farmers in Riverton gradually began to change from self-sufficient farming to commercial farming. In its early years Riverton's farmers were mostly self-sufficient, producing almost everything they needed. This was no longer the case when farming became a business. Riverton farmers were becoming specialists concentrating mostly on alfalfa, wheat, sugar beets, tomatoes, poultry, sheep or dairy cows. At this time, on land purchased from Samuel Howard in 1886, The Church of Jesus Christ of Latter-day Saints began to store tithed produce and livestock. It was not long until the hill that this enterprise was located on, at 1150 West 12400 South, became known as Tithing Yard Hill, which is now a residential planned development under the same name.

Electricity first came to Riverton in 1912. In 1913 the Salt Lake and Utah Railroad (Orem Line) was started and went through Riverton west of Redwood Road. It was used as a commuter and freight line and stretched from Salt Lake to Payson in Utah County. Trains used this line from 1914 to 1945 after which the rails and ties were removed. Riverton had its own train depot which was also torn down when the line was closed.

The community's first school had only one room. It was located in the old adobe meetinghouse used by the LDS branch on 1300 West. In 1892 a new two-story brick schoolhouse was built at 12830 South on Redwood Road, This structure had four rooms, two upstairs and two down and was built in January 1893. It was used by grades one through eight, two grades to a classroom. John Hansen was the first principal of this school. As the population grew additional classrooms were needed and another building for elementary grades was erected to the north of the four-room schoolhouse. In 1925 the south building was torn down and the north building remodeled. However, before the remodeling was completed, a fire struck-completely destroying the school on July 30, 1926. A junior high continued to be built on the south lot and the new elementary school which matched the junior high in brick color and design was erected on the site of the fire-destroyed building. Both these structures eventually became the Riverton Elementary School complex. The increased population of the 1970s and 1980s necessitated the construction of two new Riverton elementary schools. Southland Elementary was built on 2700 West and 13675 South and Rosamond Elementary at 1975 West and 12195 South.

By 1948 Riverton had grown sufficiently to be incorporated into a city. However, the city’s progress was temporarily halted by World War II, the final stage of the farming community's evolution occurred in the 1960s and 1970s. Land prices skyrocketed and Riverton's subdivisions expanded. Farmers sold land at prices many times the price they paid for it. Land was out of reach for your farmers, many of whom moved to Idaho and other neighboring states. This was mirrored throughout Salt Lake county as the number of farms decreased from 2,595 in 1950 to 798 in 1969. Nevertheless, Riverton's population more than tripled between 1970 when it totaled 2,820 inhabitants, and the mid-1980s when it reached around 10,000. 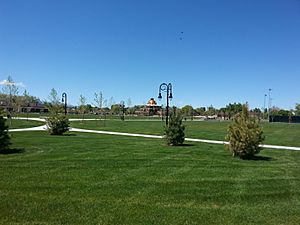 A photo of Riverton City Park.

During this time a new City Hall was constructed at the edge of the Riverton City Park at 12800 South and 1400 West. In 1996 the city purchased the old Riverton Elementary School and its surrounding 9 acres (3.6 ha) of land from the Jordan School District for $225,000. The city initially put a ballot measure out to fund the school through a general revenue bond, but the measure failed to gain support because it would have raised property taxes for residents of Riverton. Instead the city put together a multi-year plan to convert the old school house to the Riverton Community Center, and some of the land was sold to the County Library System for a new, state of the art library. By 2005–06, the city had successfully renovated the old elementary School into a new Community Center and City hall, which now houses all of the city’s administrative offices.

The often contentious city boundaries were in flux between the time of incorporation until the year 2000. At incorporation the boundaries were set from the Jordan River westward to what is now known as the coordinates of 3600 West, and from 11800 South to approximately 13800 South. In 1970, the town of Bluffdale was incorporated, taking in all of the land between 13800 South, southward to the Salt Lake/Utah County Line. 1982 saw the incorporation of the city of Draper, a town once situated at the south-east end of the Salt Lake Valley, their incorporated boundaries, uncontested by Riverton, took area all of the area eastward from the Jordan River to the I-15 freeway, an area that was once "loosely" considered or referred to as Riverton or "Riverton Siding". In 1996 the city boundaries grew, virtually doubling the physical size of the city, through the annexation of land between Riverton and what was then known as the town of Herriman (now an incorporated city), extending its boundaries from 3600 West to roughly 4800 West, and to 5600 West from 13400 South to 14200 South and points southward beyond the city limits of Bluffdale. Included in the 1996 annexation was the “Foothills” development which had previously been annexed into Riverton during the 1980s, and then later de-annexed after the original developer filed for bankruptcy. The final solidification of Riverton’s boundaries came when the city of Herriman incorporated in 2000, halting any possible further expansion westward by Riverton.

In January 2016, city leaders approved an agreement to develop 543 acres of open land in Western Riverton. The land was formerly owned by Suburban Land Reserve, a real estate arm of The Church of Jesus Christ of Latter-day Saints.

A major portion of that land will include a new mixed-use shopping center dubbed "Mountain View Village." Mountain View Village will be located on the north side of 13400 S and east of Mountain View Corridor, and is expected to include retail, restaurant, and office space, as well as a luxury theater. CenterCal Properties, the retail development company behind Station Park in Farmington, is the developer for the project.

The surrounding development will feature village-like communities with shopping plazas, office towers, public squares, parks and trails, and various housing options. The development of this 543-acre property could add as many as 12,000 new residents to Riverton's population. 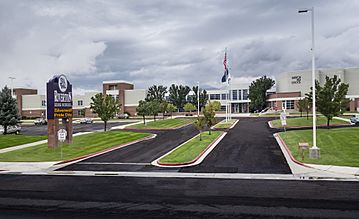 The entrance to Riverton High School.

Public education in Riverton is provided by the Jordan School District, one of the largest school districts in Utah.

Many students from Riverton do attend schools in Bluffdale, Herriman and South Jordan, as school boundaries do not coincide with city boundaries.

Riverton provides easy-access to Bangerter Highway, Mountain View Corridor, and Redwood Road; as all pass directly through the city. The city is also easily accessible from Interstate 15 via the 12300 S or Bangerter Highway exits.

All content from Kiddle encyclopedia articles (including the article images and facts) can be freely used under Attribution-ShareAlike license, unless stated otherwise. Cite this article:
Riverton, Utah Facts for Kids. Kiddle Encyclopedia.