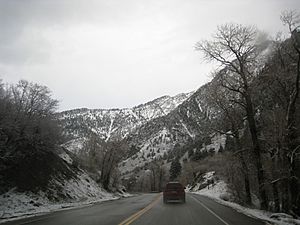 A snowy winter view of the canyon 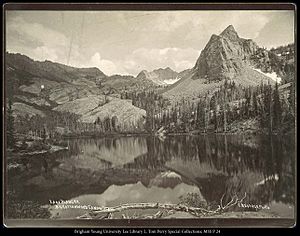 Big Cottonwood Canyon is a canyon in the Wasatch Range 12 miles (19 km) southeast of Salt Lake City in the U.S. state of Utah. The 15-mile (24 km)-long canyon provides hiking, biking, picnicking, rock-climbing, camping and fishing in the summer. Its two ski resorts, Brighton and Solitude, are popular among skiers and snowboarders. The canyon is accessed by The Big Cottonwood Canyon Scenic Byway (SR-190), which runs its length to Guardsman Pass at the top of the canyon, allowing travel to Park City in the summer months.

Guardsman Pass is closed during the winter months and is a popular snowshoe hiking destination for many Utahns.

Hiking to the canyon's mountain lakes is popular, with many trails leading to lakes such as Mary, Martha and Katherine. The canyon's most popular hiking trail leads to Lakes Blanche, Florence and Lillian. The trail is 3.1 miles (5.0 km) long and a strenuous hike. Since the canyon was formed by Big Cottonwood Creek, the V-shaped canyon has many impressive rock forms.

The canyon is also a frequent destination for Utah Native Plant Society wildflower walks and for University of Utah botanical field trips. The canyon and the adjoining Little Cottonwood Canyon contain significant biodiversity and are home to a number of rare and endemic plant species. One example is the Wasatch shooting-star, Dodecatheon dentatum var. utahense which is only known from Big Cottonwood Canyon.

Big Cottonwood Canyon is a watershed canyon that supplies drinking water to the Wasatch Front, therefore pets and other domesticated animals are not allowed. In November 2011, a proposal to construct a gondola linking Solitude Ski Resort through Big Cottonwood Canyon to the Canyons Resort in Summit County drew criticism over concerns about its potential effect on sensitive terrain and watershed impacts.

Storm Mountain is a popular picnic site. Over one hundred years ago R.D. Maxfield, Jr. carved out a home for himself and his family. It soon became a relaxing place for picnics. In the 1930s the Civilian Conservation Corps built a small stage area for public events.

The Storm Mountain area is also notable geologically for its rhythmites (a sea-level sedimentary deposit that records the cycle of the tides) and cross-bedded sandstones.

Panorama from the summit above Granite Flume

All content from Kiddle encyclopedia articles (including the article images and facts) can be freely used under Attribution-ShareAlike license, unless stated otherwise. Cite this article:
Big Cottonwood Canyon Facts for Kids. Kiddle Encyclopedia.