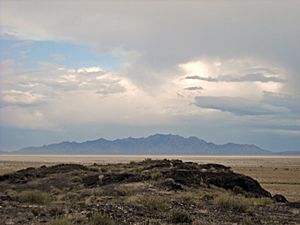 Dugway Proving Ground (DPG) is a US Army facility established in 1942 to test biological and chemical weapons, located about 85 miles (140 km) southwest of Salt Lake City, Utah and 13 miles south of the 2,624 sq mi Utah Test and Training Range forming the largest overland special use airspace in the United States. In 1968 more than 6,000 sheep were killed in the Dugway sheep incident. In 2015 it was revealed that the Dugway lab had inadvertently shipped live anthrax spores.

Dugway Proving Ground is located about 85 miles (140 km) southwest of Salt Lake City, Utah, in southern Tooele County and just north of Juab County. It encompasses 801,505 acres (3,243 km², or 1,252 sq mi) of the Great Salt Lake Desert, an area the size of the state of Rhode Island, and is surrounded on three sides by mountain ranges. It had a resident population of 795 persons as of the 2010 United States Census, all of whom lived in the community of Dugway, Utah, at its extreme eastern end.

The transcontinental Lincoln Highway passed through the present site of the Dugway Proving Ground, and is the only section of the old highway closed to the public. At least one old wooden bridge over a creek still stands. The name Dugway comes from a technique of digging a trench into a hillside to create a flat surface along which a wagon can travel.

Dugway's mission is to test US and Allied biological and chemical weapon defense systems in a secure and isolated environment. DPG also serves as a facility for US Army Reserve and US National Guard maneuver training, and US Air Force flight tests—mostly from nearby Hill Air Force Base in Clearfield. DPG is controlled by the United States Army Test and Evaluation Command (ATEC). The area has also been used by Army special forces for training in preparation for deployments to the War in Afghanistan.

In 1941, the US Army Chemical Warfare Service (CWS) determined it needed a testing facility more remote than the US Army's Edgewood Arsenal in Maryland. The CWS surveyed the Western U.S. for a new location to conduct its tests, and in the spring of 1942, construction of Dugway Proving Ground began. Since its founding, much of Dugway Proving Ground activity has been a closely guarded secret.

In October 1943, DPG established biological warfare facilities at UTTR's range telemetry and tracking radar installation, which is an isolated area within DPG known as the Granite Peak Installation. DPG was slowly phased out after World War II, until becoming inactive in August 1946.

The base was reactivated during the Korean War, under Commanding Officer Lieutenant Colonel Speers Ponder, and in 1954 was confirmed as a permanent Department of the Army installation. In October 1958, the United States Army Chemical Center, Maryland, detached the U.S. Army Chemical, Biological, and Radiological Weapons School to Dugway Proving Grounds.

From 1985 to 1991, Dugway Proving Ground was home to the Ranger School's short-lived Desert Training Phase. It was first known as the Desert Ranger Division (DRD) until redesignated the Ranger Training Brigade's 7th Ranger Training Battalion in 1987, and taught students basic desert survival skills and small unit tactics. The program was later moved back to its original site at Fort Bliss, Texas, in 1991, where it was deactivated in 1995.

On September 8, 2004, the Genesis, a NASA spacecraft, was directed to impact into the desert floor of the Dugway Proving Ground because the topsoil there is like talcum powder, or moondust, and would likely cushion the troubled spacecraft's impact. The Genesis spacecraft's accelerometer was installed backwards, which caused the spacecraft to malfunction upon re-entry to Earth's atmosphere preventing the originally planned air retrieval.

On January 26, 2011, Dugway Proving Ground was placed on lockdown. Al Vogel, a public affairs specialist for the installation, would only say that the lockdown began at 5:24 p.m. Employees were not allowed to leave, and those coming to work were not allowed in. Vogel said there were no injuries, no damage and no threats reported at the proving ground. There were about 1,200 to 1,400 people at Dugway when the lockdown occurred. It was later announced that the lockdown was in response to the temporary loss of a vial containing VX nerve agent. The lockdown was lifted on January 27 following recovery of the material. The incident was described simply as a mislabeling problem.

Activities included aerial nerve agent testing. According to reports from New Scientist, Dugway was still producing quantities of anthrax spores as late as 2015, more than four decades after the United States renounced biological weapons, and shipping the material to military bases and military contractors around the globe. There were at least 1,100 other chemical tests at Dugway during the time period of the Dugway sheep incident (see below). In total, almost 500,000 lb (230,000 kg) of nerve agent were dispersed during open-air tests. There were also tests at Dugway involving other weapons of mass destruction, including 328 open-air tests of biological weapons, 74 dirty bomb tests, and eight furnace heatings of nuclear material under open-air conditions to simulate the dispersal of fallout in the case of meltdown of aeronautic nuclear reactors.

In March 1968, 6,249 sheep died in Skull Valley, an area nearly thirty miles from Dugway's testing sites. When examined, the sheep were found to have been poisoned by an organophosphate chemical. The sickening of the sheep, known as the Dugway sheep incident, coincided with several open-air tests of the nerve agent VX at Dugway. Local attention focused on the Army, which initially denied that VX had caused the deaths, instead blaming the local use of organophosphate pesticides on crops. Necropsies conducted on the dead sheep later definitively identified the presence of VX. The Army never admitted liability, but did pay the ranchers for their losses. On the official record, the claim was for 4,372 "disabled" sheep, of which about 2,150 were either killed outright by the VX exposure or were so critically injured that they needed to be euthanized on-site by veterinarians. Another 1,877 sheep were "temporarily" injured, or showed no signs of injury but were not marketable due to their potential exposure. All of the exposed sheep that survived the initial exposure were eventually euthanized by the ranchers, since even the potential for exposure had rendered the sheep permanently unsalable for either meat or wool.

The incident, coinciding with the birth of the environmental movement and anti-Vietnam War protests, created an uproar in Utah and the international community. The incident also starkly underscored the inherent unpredictability of air-dispersal of chemical warfare agents, as well as the extreme lethality of next-generation persistent nerve agents at even extremely low concentrations.

The U.S. General Accounting Office issued a report on September 28, 1994, which stated that between 1940 and 1974, DOD and other national security agencies performed "hundreds, perhaps thousands" of weapons tests and experiments involving hazardous substances.

The quote from the study:

... Dugway Proving Ground is a military testing facility located approximately 80 miles southwest of Salt Lake City. For several decades, Dugway has been the site of testing for various chemical and biological agents. From 1951 through 1969, hundreds, perhaps thousands of open-air tests using bacteria and viruses that cause disease in human, animals, and plants were conducted at Dugway ... It is unknown how many people in the surrounding vicinity were also exposed to potentially harmful agents used in open-air tests at Dugway.

More specifically, there are reports that certain nerve agents such as tetrodotoxin and datura stramonium have been tested at this military base. The complete nerve agent was code-named "VX"—one of a series of "V" nerve agents tested at the base.

In May 2015 it was revealed that Dugway lab had inadvertently shipped live anthrax bacillus to locations around the country. Shipped samples, it was said, were supposed to be inert. Labs receiving the live samples were in Texas, Maryland, Wisconsin, Delaware, New Jersey, Tennessee, New York, California and Virginia, the Associated Press reported. Days after the first report, the military divulged that the mis-shipments had been broader than initially reported and launched an investigation. Dugway was involved in developing a test to identify biological threats in the field.

Following the public attention drawn to Area 51 in the early 1990s, UFOlogists and concerned citizens have suggested that whatever covert operations may have been underway at that location, if any, were subsequently transferred to DPG.

The Deseret News reported that Dave Rosenfeld, president of Utah UFO Hunters, stated: "Numerous UFOs have been stored and reported in the area in and around Dugway ... [military aircraft can't account for] all the unknowns seen in the area. It might be that our star visitors are keeping an eye on Dugway too. ... [Dugway is] the new Area 51. And probably the new military spaceport."

All content from Kiddle encyclopedia articles (including the article images and facts) can be freely used under Attribution-ShareAlike license, unless stated otherwise. Cite this article:
Dugway Proving Ground Facts for Kids. Kiddle Encyclopedia.