Jarbidge, along with the rest of Nevada except for the city of West Wendover, is legally in the Pacific Time Zone, but, along with other Idaho border towns such as Jackpot, Mountain City and Owyhee, unofficially observes the Mountain Time Zone due to closer proximity to and greater connections with towns in southern Idaho.

Noted locally for its remoteness, no paved roads exist within almost 20 miles of Jarbidge. The community is usually and most easily accessed using a motor vehicle by way of Three Creek Road, which originates along U.S. Route 93 in Rogerson, Twin Falls County, Idaho; the final 18 miles of this route are unimproved, but usually open all year. From Elko, the easiest access is by proceeding 55 miles north along Nevada State Route 225, then 27 miles east along Elko County Road 746, the North Fork-Charleston Road (signed for Charleston and Jarbidge), and finally 22 miles north along Elko County Road 748, the Charleston-Jarbidge Road. The latter two segments of this route are unimproved and receive no winter maintenance. They are therefore often closed from as early as October or November to as late as June or July due to heavy snowfall. 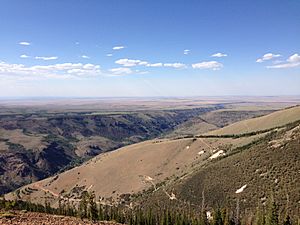 Jarbidge, visible in the lower left of this photo, lies at the bottom of the Jarbidge River Canyon, which stretches 50 miles from the Jarbidge Mountains to the Bruneau River in Idaho

Gold was discovered near Jarbidge in 1909, making it the site of one of the last gold rushes in the Old West and, incidentally was the site of the last stagecoach robbery in 1916. Its population swelled to near 2000 in 1911, but afterwards began a slow decline when the mining facilities were largely cannibalized for the war effort during World War I. Mining operations ceased completely in 1932. However, in 2013 permits for the removal of the gold have been re-issued and the mine is reopening.

All content from Kiddle encyclopedia articles (including the article images and facts) can be freely used under Attribution-ShareAlike license, unless stated otherwise. Cite this article:
Jarbidge, Nevada Facts for Kids. Kiddle Encyclopedia.