Pequop or Pequop Siding is a ghost town in Elko County, Nevada. It was located west of Toano on the route around the north end of the Pequop Mountains between Cobre and Wells. It was first a stop station of the Central Pacific Railroad and later Southern Pacific Railroad. Several buildings were erected to house section crews. The end of the village was in the 1940s, when the introduction of diesel in locomotives made Pequop obsolete. 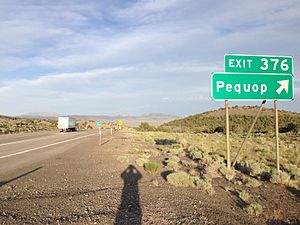 Exit for Pequop along I-80

All content from Kiddle encyclopedia articles (including the article images and facts) can be freely used under Attribution-ShareAlike license, unless stated otherwise. Cite this article:
Pequop, Nevada Facts for Kids. Kiddle Encyclopedia.