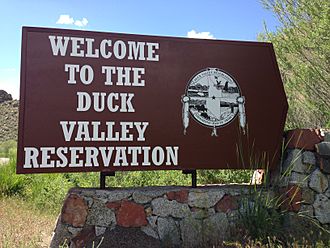 The Duck Valley Indian Reservation was established in the 19th century for the federally recognized Shoshone-Paiute Tribe. It is isolated in the high desert of the western United States, and lies directly on the state line, the 42nd parallel, between Idaho and Nevada.

The reservation, in the shape of a square, is almost evenly divided in land area between the two states, with the northern 50.2 percent in southern Owyhee County, Idaho and the southern 49.8 percent in northwestern Elko County, Nevada. The total land area is 450.391 square miles (1,166.5 km2). A resident population of 1,265 persons was reported in the 2000 census, more than 80 percent of whom lived on the Nevada side.

In October 2016 the Nevada Native Nations Land Act was passed to put Bureau of Land Management (BLM) and Forest Service lands into trust for six federally recognized tribes in the state. The Shoshone-Paiute Tribe will have 82 acres of Forest Service land added to their reservation. Some other tribes are receiving thousands of acres of trust lands. Gaming is prohibited on the new lands.

The only significant community on the reservation is Owyhee, Nevada, at an elevation of 5,400 feet (1,650 m) above sea level. Owyhee is nearly equidistant from the two nearest major cities: 98 miles (158 km) north of Elko, Nevada, the county seat of the county by that name; and 97 miles (156 km) south of Mountain Home, Idaho.

On April 16, 1877, President Rutherford B. Hayes established the Duck Valley Western Shoshone Reservation by Executive Order; it was also used for Northern Paiute people. Despite the Native Americans having a designated reservation, local settlers and some politicians tried to force the tribal members off the valuable Duck Valley lands in 1884, suggesting they should join their Western Shoshone kinsmen at the reservation at Fort Hall, Idaho. The bands' chiefs successfully resisted these efforts to be displaced from their lands.

Meanwhile, the Northern Paiute band joined with another branch of Shoshone in the Bannock War of 1878. Survivors were sent to a prisoner-of-war camp at the Yakama Indian Reservation in Yakima County, Washington. Upon their release, the Northern Paiute returned to the Duck Valley. President Grover Cleveland expanded the reservation by Executive Order on May 4, 1886 to accommodate the Paiute.

President William Howard Taft expanded the reservation to its current size by Executive Order on July 1, 1910. It was unusual to have two federal government actions to enlarge the reservation after it was established; most federal actions have been taken to reduce the size of Indian reservations.

All content from Kiddle encyclopedia articles (including the article images and facts) can be freely used under Attribution-ShareAlike license, unless stated otherwise. Cite this article:
Duck Valley Indian Reservation Facts for Kids. Kiddle Encyclopedia.