Anthropologists have written that the Nez Percé descend from the Old Cordilleran Culture, which moved south from the Rocky Mountains and west into lands where the tribe coalesced. This name was given to this tribe and the nearby Chinook people by French explorers and trappers, meaning "pierced nose," but only the Chinook used that form of decoration. 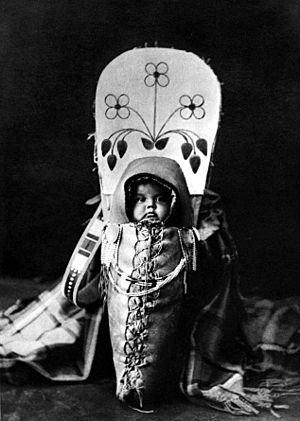 Their name for themselves is Nimíipuu (pronounced), meaning, "The People," in their language, part of the Sahaptin family.

Nez Percé is an exonym given by French Canadian fur traders who visited the area regularly in the late 18th century, meaning literally "pierced nose." English-speaking traders and settlers adopted the name in turn. Since the late 20th century, the Nez Perce identify most often as Niimíipu in Sahaptin.

The tribe also uses the term "Nez Perce," as does the United States Government in its official dealings with them, and contemporary historians. Older historical ethnological works and documents use the French spelling of Nez Percé, with the diacritic. The original French pronunciation is with three syllables.

In his journals, William Clark referred to the people as the Chopunnish a transliteration of a Sahaptin term. According to D.E. Walker in 1998, writing for the Smithsonian, this term is an adaptation of the term cú·pŉitpeľu (the Nez Perce people). The term is formed from cú·pŉit (piercing with a pointed object) and peľu (people). By contrast, the Nez Perce Language Dictionary (published by the University of California Press, 1994) has a different analysis than did Walker for the term cúpnitpelu. The prefix cú- means "in single file." This prefix, combined with the verb -piní, "to come out (e.g. of forest, bushes, ice)". Finally, with the suffix of -pelú, meaning "people or inhabitants of." Together, these three elements: cú- + -piní + pelú = cúpnitpelu, or "the People Walking Single File Out of the Forest." Nez Perce oral tradition indicates the name "Cuupn'itpel'uu" meant "we walked out of the woods or walked out of the mountains" and referred to the time before the Nez Perce had horses.

The interpreter of the Lewis and Clark Expedition mistakenly identified this people as the Nez Perce when the team encountered the tribe in 1805. They did not practice nose piercing or wearing ornaments. The tribe known as "pierced nose" lived on and around the lower Columbia River in the Pacific Northwest. They are commonly called the Chinook tribe by historians and anthropologists. The Chinook relied heavily upon salmon as a food staple, as did the Nez Perce. The peoples shared fishing and trading sites, but the Chinook had a distinctly different culture and more hierarchical social arrangements.

The Nez Perce language, or Niimiipuutímt, is a Sahaptian language related to the several dialects of Sahaptin. The Sahaptian sub-family is one of the branches of the Plateau Penutian family, which in turn may be related to a larger Penutian grouping. 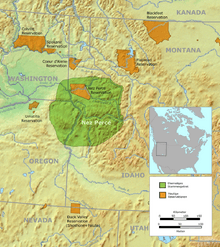 The Nez Perce territory at the time of Lewis and Clark (1804–1806) was approximately 17,000,000 acres (69,000 km2) and covered parts of present-day Washington, Oregon, Montana, and Idaho, in an area surrounding the Snake, Salmon and the Clearwater rivers. The tribal area extended from the Bitterroots in the east to the Blue Mountains in the west between latitudes 45°N and 47°N.

In 1800, the Nez Perce had more than 100 permanent villages, ranging from 50 to 600 individuals, depending on the season and social grouping. Archeologists have identified a total of about 300 related sites including camps and villages, mostly in the Salmon River Canyon. In 1805, the Nez Perce were the largest tribe on the Columbia River Plateau, with a population of about 12,000. By the beginning of the 20th century, the Nez Perce had declined to about 8,500 due to epidemics, conflicts with non-Indians, and other factors. A total of 3,499 Nez Perce were counted in the 2010 Census.

Like other Plateau tribes, the Nez Perce had seasonal villages and camps in order to take advantage of natural resources throughout the year. Their migration followed a reoccurring pattern from permanent winter villages through several temporary camps, nearly always returning to the same locations each year. The Nez Perce traveled far east as the Great Plains of Montana to hunt buffalo and as far west as the West Coast. Before 1957 construction of The Dalles Dam, which flooded this area, Celilo Falls was a favored location on the Columbia River for salmon-fishing. 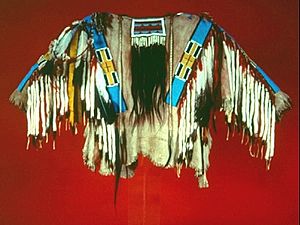 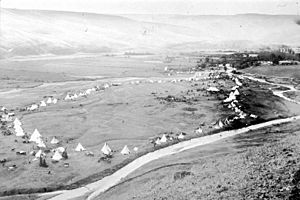 Camas, or qém'es, has traditionally been an important food and trade item. Camas bulbs were gathered in the region between the Salmon and Clearwater river drainages.

The Nez Perce believed in spirits called weyekins (Wie-a-kins) which would, they thought, offer "a link to the invisible world of spiritual power". The weyekin would protect one from harm and become a personal guardian spirit. To receive a weyekin, a seeker would go to the mountains alone on a vision quest. This included fasting and meditation over several days. While on the quest, the individual may receive a vision of a spirit, which would take the form of a mammal or bird. This vision could appear physically or in a dream or trance. The weyekin was to bestow the animal's powers on its bearer—for example; a deer might give its bearer swiftness. A person's weyekin was very personal. It was rarely shared with anyone and was contemplated in private. The weyekin stayed with the person until death.

The museum at the Nez Perce National Historical Park, headquartered in Spalding, Idaho, and managed by the National Park Service includes a research center, archives, and library. Historical records are available for on-site study and interpretation of Nez Perce history and culture. The park includes 38 sites associated with the Nez Perce in the states of Idaho, Montana, Oregon, and Washington, many of which are managed by local and state agencies. 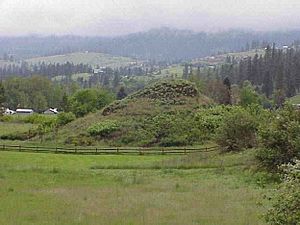 "The Heart of the Monster", described in the Nez Perce origin story

In 1805 William Clark was the first known Euro-American to meet any of the tribe, excluding the aforementioned French Canadian traders. While he, Meriwether Lewis and their men were crossing the Bitterroot Mountains, they ran low of food, and Clark took six hunters and hurried ahead to hunt. On September 20, 1805, near the western end of the Lolo Trail, he found a small camp at the edge of the camas-digging ground, which is now called Weippe Prairie. The explorers were favorably impressed by the Nez Perce whom they met. Preparing to make the remainder of their journey to the Pacific by boats on rivers, they entrusted the keeping of their horses until they returned to "2 brothers and one son of one of the Chiefs." One of these Indians was Walammottinin (meaning "Hair Bunched and tied," but more commonly known as Twisted Hair). He was the father of Chief Lawyer, who by 1877 was a prominent member of the "Treaty" faction of the tribe. The Nez Perce were, generally faithful to the trust; and the party recovered their horses without serious difficulty when they returned.

Flight of the Nez Perce 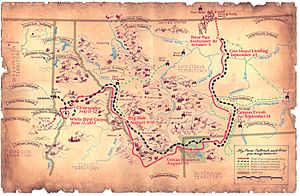 Under pressure from the European Americans, in the late 19th century the Nez Perce split into two groups: one side accepted the coerced relocation to a reservation and the other refused to give up their fertile land in Idaho and Oregon. Those willing to go to a reservation made a treaty in 1877. The flight of the non-treaty Nez Perce began on June 15, 1877, with Chief Joseph, Looking Glass, White Bird, Ollokot, Lean Elk (Poker Joe) and Toohoolhoolzote leading 2,900 men, women and children in an attempt to reach a peaceful sanctuary. They intended to seek shelter with their allies the Crow but, upon the Crow's refusal to offer help, the Nez Perce tried to reach the camp in Canada of Lakota Chief Sitting Bull. He had migrated there instead of surrendering after the decisive Indian victory at the Battle of the Little Bighorn.

The Nez Perce were pursued by over 2,000 soldiers of the U.S. Army on an epic flight to freedom of more than 1,170 miles (1,880 km) across four states and multiple mountain ranges. The 800 Nez Perce warriors defeated or held off the pursuing troops in 18 battles, skirmishes, and engagements. More than 300 US soldiers and 1,000 Nez Perce (including women and children) were killed in these conflicts.

A majority of the surviving Nez Perce were finally forced to surrender on October 5, 1877, after the Battle of the Bear Paw Mountains in Montana, 40 miles (64 km) from the Canada–US border. Chief Joseph surrendered to General Oliver O. Howard of the U.S. Cavalry. During the surrender negotiations, Chief Joseph sent a message, usually described as a speech, to the US soldiers. It has become renowned as one of the greatest American speeches: "...Hear me, my chiefs, I am tired. My heart is sick and sad. From where the sun now stands, I will fight no more forever."

The route of the Nez Perce flight is preserved by the Nez Perce National Historic Trail. The annual Cypress Hills ride in June commemorates the Nez Perce people's attempt to escape to Canada.

In 1994 the Nez Perce tribe began a breeding program, based on crossbreeding the Appaloosa and a Central Asian breed called Akhal-Teke, to produce what they called the Nez Perce Horse. They wanted to restore part of their traditional horse culture, where they had conducted selective breeding of their horses, long considered a marker of wealth and status, and trained their members in a high quality of horsemanship. Social disruption due to reservation life and assimilationist pressures by Americans and the government resulted in the destruction of their horse culture in the 19th century. The 20th-century breeding program was financed by the United States Department of Health and Human Services, the Nez Perce tribe, and the nonprofit called the First Nations Development Institute. It has promoted businesses in Native American country that reflect values and traditions of the peoples. The Nez Perce Horse breed is noted for its speed.

Fishing is an important ceremonial, subsistence, and commercial activity for the Nez Perce tribe. Nez Perce fishers participate in tribal fisheries in the mainstream Columbia River between Bonneville and McNary dams. The Nez Perce also fish for spring and summer Chinook salmon and steelhead in the Snake River and its tributaries. The Nez Perce tribe runs the Nez Perce Tribal Hatchery on the Clearwater River, as well as several satellite hatchery programs.

Nez Perce people historically depended on fish for their food. Chinook salmon were eaten the most, but other species such as lampreys, whitefish, and chiselmouth. Prior to contact with Europeans, the Nez Perce's traditional hunting and fishing areas spanned from the Cascade Range in the west to the Bitterroot Mountains in the east.

Due to tribal loss of lands, the population on the reservation is predominantly white, nearly 90% in 1988. The largest community is the city of Orofino, near its northeast corner. Lapwai is the seat of tribal government, and it has the highest percentage of Nez Percé people as residents, at about 81.4 percent.

Similar to the opening of Native American lands in Oklahoma by allowing acquisition of surplus by non-natives after households received plots, the U.S. government opened the Nez Percé reservation for white settlement on November 18, 1895. The proclamation had been signed less than two weeks earlier by President Grover Cleveland. Thousands of unruly whites rushed to grab land on the reservation, staking out their claims even on land owned by Nez Percé families.

In addition, the Colville Indian Reservation in eastern Washington contains the Joseph band of Nez Percé. 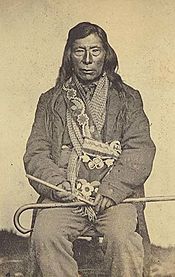 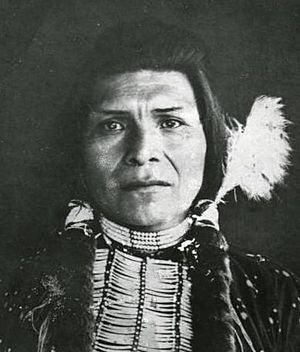 Peo Peo Tholekt (Bird Alighting), a Nez Perce warrior who helped capture the mountain howitzer at the Battle of the Big Hole 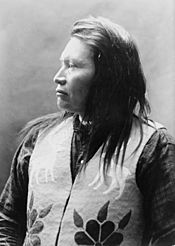 All content from Kiddle encyclopedia articles (including the article images and facts) can be freely used under Attribution-ShareAlike license, unless stated otherwise. Cite this article:
Nez Perce people Facts for Kids. Kiddle Encyclopedia.