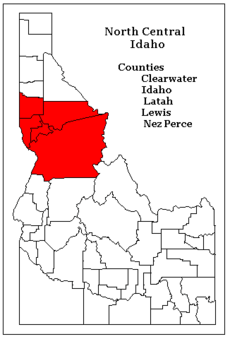 Lewiston and Clarkston, WA, from the north, (old grade in foreground)

North Central Idaho is an area which spans the central part of the state of Idaho and borders Oregon, Montana, and Washington. It is the southern half of the Idaho Panhandle region and is rich in agriculture and natural resources. Lewis and Clark travelled through this area on their journey to the Pacific Ocean in 1805-06. The primary cities in this region are Lewiston and Moscow, home of the University of Idaho.

With the exception of the southern portion of Idaho County, this region observes Pacific Time.
South of the western-flowing Salmon River, Idaho observes Mountain Time, beginning at Riggins. 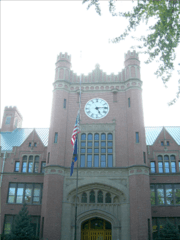 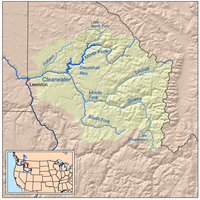 All content from Kiddle encyclopedia articles (including the article images and facts) can be freely used under Attribution-ShareAlike license, unless stated otherwise. Cite this article:
North Central Idaho Facts for Kids. Kiddle Encyclopedia.