Hells Canyon is a 10-mile (16 km) wide canyon located along the border of eastern Oregon, eastern Washington and western Idaho in the United States. It is part of the Hells Canyon National Recreation Area and is North America's deepest river gorge at 7,993 feet (2,436 m).

The canyon was carved by the waters of the Snake River, which flows more than 1 mile (1.6 km) below the canyon's west rim on the Oregon side and 7,400 feet (2,300 m) below the peaks of Idaho's Seven Devils Mountains range to the east. Most of the area is inaccessible by road.

The geologic history of the rocks of Hells Canyon began 300 million years ago with an arc of volcanoes that emerged from the waters of the Pacific Ocean. Over millions of years, the volcanoes subsided and limestone built up on the underwater platforms. The basins between them were filled with sedimentary rock. Between 130 and 17 million years ago, the ocean plate carrying the volcanoes collided with and became part of the North American continent. A period of volcanic activity followed, and much of the area was covered with floods of basalt lava, which smoothed the topography into a high plateau. The Snake River began carving Hells Canyon out of the plateau about 6 million years ago. Significant canyon-shaping events occurred as recently as 15,000 years ago during a massive outburst flood from Glacial Lake Bonneville in Utah. 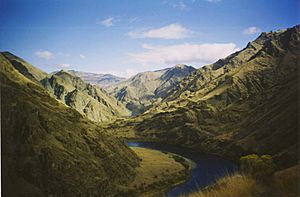 The earliest known settlers in Hells Canyon were the Nez Percé tribe. Others tribes visiting the area were the Shoshone-Bannock, northern Paiute and Cayuse Indians. The mild winters, and ample plant and wildlife attracted human habitation. Pictographs and petroglyphs on the walls of the canyon are a record of the Indian settlements.

In 1806, three members of the Lewis and Clark Expedition entered the Hells Canyon region along the Salmon River. They turned back without seeing the deep parts of the canyon. It was not until 1811 that the Wilson Price Hunt expedition explored Hells Canyon while seeking a shortcut to the Columbia River. Hunger and cold forced them to turn back, as did many explorers who were defeated by the canyon's inaccessibility. There remains no evidence in the canyon of their attempts; their expedition journals are the only documentation. Early explorers sometimes called this area Box Canyon or Snake River Canyon.

The early miners were next to follow. In the 1860s gold was discovered in river bars near present-day Hells Canyon National Recreation Area, and miners soon penetrated Hells Canyon. Gold mining was not profitable here. Evidence of their endeavors remains visible along the corridor of the Snake River. Later efforts concentrated on hard-rock mining, requiring complex facilities. Evidence of these developments is visible today, especially near the mouth of the Imnaha River.

In the 1880s there was a short-lived homesteading boom, but the weather was unsuited to farming and ranching, and most settlers soon gave up. However, some ranchers still operate within the boundaries of the National Recreation Area.

In May 1887, perhaps 34 Chinese gold miners were ambushed and killed in the area. The event is recalled as Hells Canyon Massacre.

After completion of large hydropower dams on the Columbia River in the 1930s through the 1950s, several entities sought approval from the Federal Power Commission to build dams on the Snake River, including a high dam in Hells Canyon. In 1955, the commission issued a license to the Idaho Power Company to build a three-dam complex in the canyon: 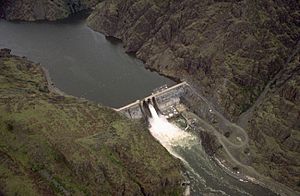 The three dams have a combined generating capacity of 1,167 megawatts (MW) of electricity. The complex, which provides about 70 percent of Idaho's hydroelectricity, blocks migration of salmon and other anadromous fish upstream of Hells Canyon Dam.

There are many recreational activities available within the canyon. Activities in Hells Canyon include fishing, jet boat tours, hunting, hiking, camping and whitewater sports (mainly rafting and kayaking). Much of these activities rely on the mighty Snake River, which is the main factor in the creation of Hells Canyon. The Snake River is home to numerous fish species, an abundance of class I-IV rapids (some of largest in the Pacific Northwest), diverse wildlife and miles of trail systems. These key components make Hells Canyon an outdoor recreation mecca that brings in tourists from around the world. Hells canyon offers tours year round, while most of the whitewater activities peak in summer months. To participate in these recreational activities one can utilize commercial charters or private trips.

No roads cross Hells Canyon and only three roads reach the Snake River between Hells Canyon Dam and the Oregon–Washington state boundary further downstream. From Oxbow Bridge near Copperfield, Oregon, Hells Canyon Road follows the Idaho side of the river 22 miles (35 km) downstream to the Hells Canyon Dam. The road crosses the dam and continues another mile to the Hells Canyon Visitor Center on the Oregon side. Further north on the Idaho side, Deer Creek Road connects White Bird, Idaho, to the river at Pittsburg Landing. Near the northern end of the canyon, Forest Road 4260 (Lower Imnaha Road), the last part of which is too rough for most cars, reaches the river at Dug Bar, 21 miles (34 km) from Imnaha, Oregon. On the canyon rims, viewpoints accessible by road include Hat Point and Buckhorn in Oregon and Heavens Gate in Idaho.

All content from Kiddle encyclopedia articles (including the article images and facts) can be freely used under Attribution-ShareAlike license, unless stated otherwise. Cite this article:
Hells Canyon Facts for Kids. Kiddle Encyclopedia.