Wallowa County is one of the 36 counties in the U.S. state of Oregon. As of the 2020 census, the population was 7,391, making it Oregon's fifth-least populous county. Its county seat is Enterprise. According to Oregon Geographic Names, the origins of the county's name are uncertain, with the most likely explanation being it is derived from the Nez Perce term for a structure of stakes (a weir) used in fishing. An alternative explanation is that Wallowa is derived from a Nez Perce word for "winding water". The journals of Lewis and Clark Expedition record the name of the Wallowa River as Wil-le-wah.

Wallowa County is part of the eight-county definition of Eastern Oregon.

In 1871, the first white settlers came to the area, crossing the mountains in search of livestock feed in the Wallowa Valley. The county was established on February 11, 1887, from the eastern portion of Union County. Boundary changes occurred with Union County in 1890, 1900, and 1915.

In 1877, the younger Chief Joseph of the Nez Perce, incensed at the government's attempt to deprive his people of the Wallowa Valley, refused to relocate to the reservation in north central Idaho. Several regiments of U.S. Army troops were dispatched to force him onto the reservation. After several battles and a march of almost two thousand miles (3,200 km) towards sanctuary in Canada, Chief Joseph was forced to surrender in eastern Montana, forty miles (60 km) from the border with Canada. He and some of the survivors from his band were detained in Oklahoma, and later were relocated to Colville Reservation in northeast Washington. Approximately half of the survivors moved to the Nez Perce Reservation in Idaho. Chief Joseph last visited Wallowa County in 1902, and died two years later.

Wallowa County was the scene of perhaps the worst incident of violence against Chinese in Oregon, when in May 1887 a gang of rustlers massacred 10-34 Chinese gold miners in Hells Canyon. Of the seven rustlers and schoolboys believed to have been responsible, only three were brought to trial in Enterprise, where a jury found them not guilty on September 1, 1888. A proposal to commemorate this event on official maps as Chinese Massacre Cove was approved in 2005 and encompasses a five-acre site.

Wallowa County Courthouse was built in 1909–1910, using locally quarried Bowlby stone, a type of volcanic tuff. It is a Romanesque Revival-style building with Queen Anne architectural elements in some exterior features. The courthouse was listed on National Register of Historic Places in 2000. Today, it still houses Wallowa County government offices and faces west toward South River Street and is surrounded by Courthouse Square which encompasses one city block, approximately 1.3 acres (1 ha). The square is landscaped with oak, pine, maple, linden, juniper, and flowering crab apple trees. There are roses planted on the north, west, and south sides of the courthouse. The square also has several veteran memorials along with a 20-by-24-foot (6.1 by 7.3 m) wood-framed gazebo in the northeast corner of the square. 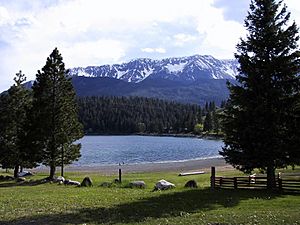 In December 2003, a developer announced a proposal to buy a 62-acre (0.25 km2) property near Wallowa Lake, and build 11 homes on it. This property is adjacent to the property that is home to the grave of Old Chief Joseph, father of the younger Chief Joseph. This proposal drew opposition from a local group, as well as from the Nez Perce, Colville, and Umatilla tribes. Prior offers by the National Park Service and the Trust for Public Land to buy the land were rejected. The County commissioners gave conditional approval for the developers to complete a final plat of the land on February 13, 2004, but the attorney for the Nez Perce said the tribe would appeal the decision to the Oregon Land Use Board of Appeals.

Wallowa Lake and the Wallowa Mountains attract tourists to this region. The lake is a natural glacial formation, held in on three sides by prominent moraines. The microclimate is somewhat different from the surrounding areas and provides a cool retreat during the summer. Other geographic features include:

The principal industries in Wallowa County are agriculture, ranching, lumber, and tourism. Since 1985, three bronze foundries and a number of related businesses specializing in statue-making have opened in Joseph and Enterprise, helping to stabilize the local economy. The Forest Service is the largest landlord in the county, owning 56% of the land.

All content from Kiddle encyclopedia articles (including the article images and facts) can be freely used under Attribution-ShareAlike license, unless stated otherwise. Cite this article:
Wallowa County, Oregon Facts for Kids. Kiddle Encyclopedia.