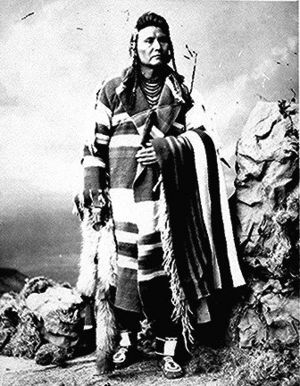 Chief Joseph (1840 – September 21, 1904; whose real name was Hinmaton-Yalaktit) was the chief of the Nez Perce Native Americans, a tribe that lived in what is now the Pacific Northwest of the United States. His father was the leader of the Nez-Perce before him, and his mother was a member of this tribe too.

When Joseph was young, his father always told him not to trust white men, he actually had problems with settlers. When his father died, Joseph became chief of the tribe, who resided in plateaus in Northeast Oregon, Southeast Washington and Western Idaho.

The turning point in their relationship to white men was the gold rush in 1863. It gave the US Government the opportunity to reduce their reservation to a small area in Idaho. Then, with the new waves of white men settling in the West, the Government wanted to drive Nez-Perces away from their territory.

Chief Joseph was extremely sad: this place was the tribe's territory where their ancestors were buried. In spite of that, he wanted to avoid conflict and remain in peace. In 1873 he decided to negotiate with the US Government. He travelled all the way to Washington D.C. and spoke to President Ulysses S. Grant. But he only got mean looks and little attention.

So a war began in 1877. The living conditions of Chief Joseph's tribe were awful: they had no food and no blankets. Some people were freezing to death. But the Nez-Perces impressed their enemy thanks to all the battles they won. Many men died on both sides. That's why Joseph decided to surrender. He gave up fighting in 1877.

He was destroyed by the death of his people, and also extremely disappointed: he felt betrayed by white people. He knew he could not trust them anymore. He was tired of being considered a savage. He felt it was not fair for people who were born on the same land to be treated differently. He delivered a lot of speeches on this subject, which are still really good examples of eloquence. But he did not feel listened to, and when he died in his reservation in 1904, the doctor said he "died from sadness". He was buried in Colville Native American Burial Ground, in Washington State.

All content from Kiddle encyclopedia articles (including the article images and facts) can be freely used under Attribution-ShareAlike license, unless stated otherwise. Cite this article:
Chief Joseph Facts for Kids. Kiddle Encyclopedia.