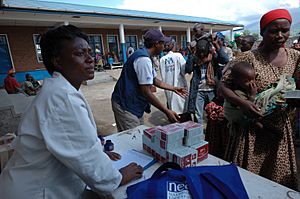 Distribution of relief supplies in Goma, Democratic Republic of the Congo.

Humanitarianism is a way of behaving out of kindness to other people. Someone who is a humanitarian is a person who helps to improve the lives of other people without thinking about their race, belief or nationality.

Humanitarianism is not the same thing as Humanism which is about not believing in a god.

A good example of Humanitarianism is the well-known story from the New Testament about the Good Samaritan who goes to help the poor man who has been robbed.

All content from Kiddle encyclopedia articles (including the article images and facts) can be freely used under Attribution-ShareAlike license, unless stated otherwise. Cite this article:
Humanitarianism Facts for Kids. Kiddle Encyclopedia.